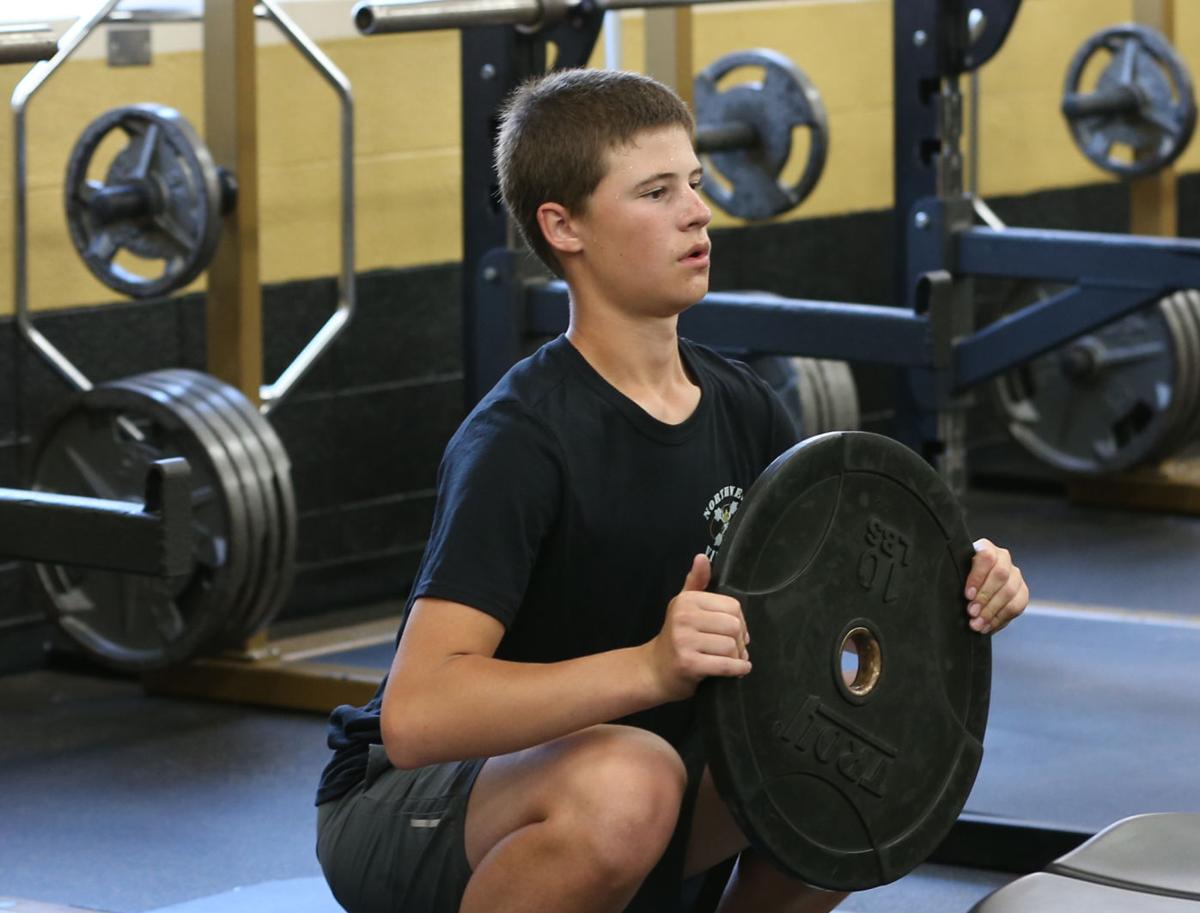 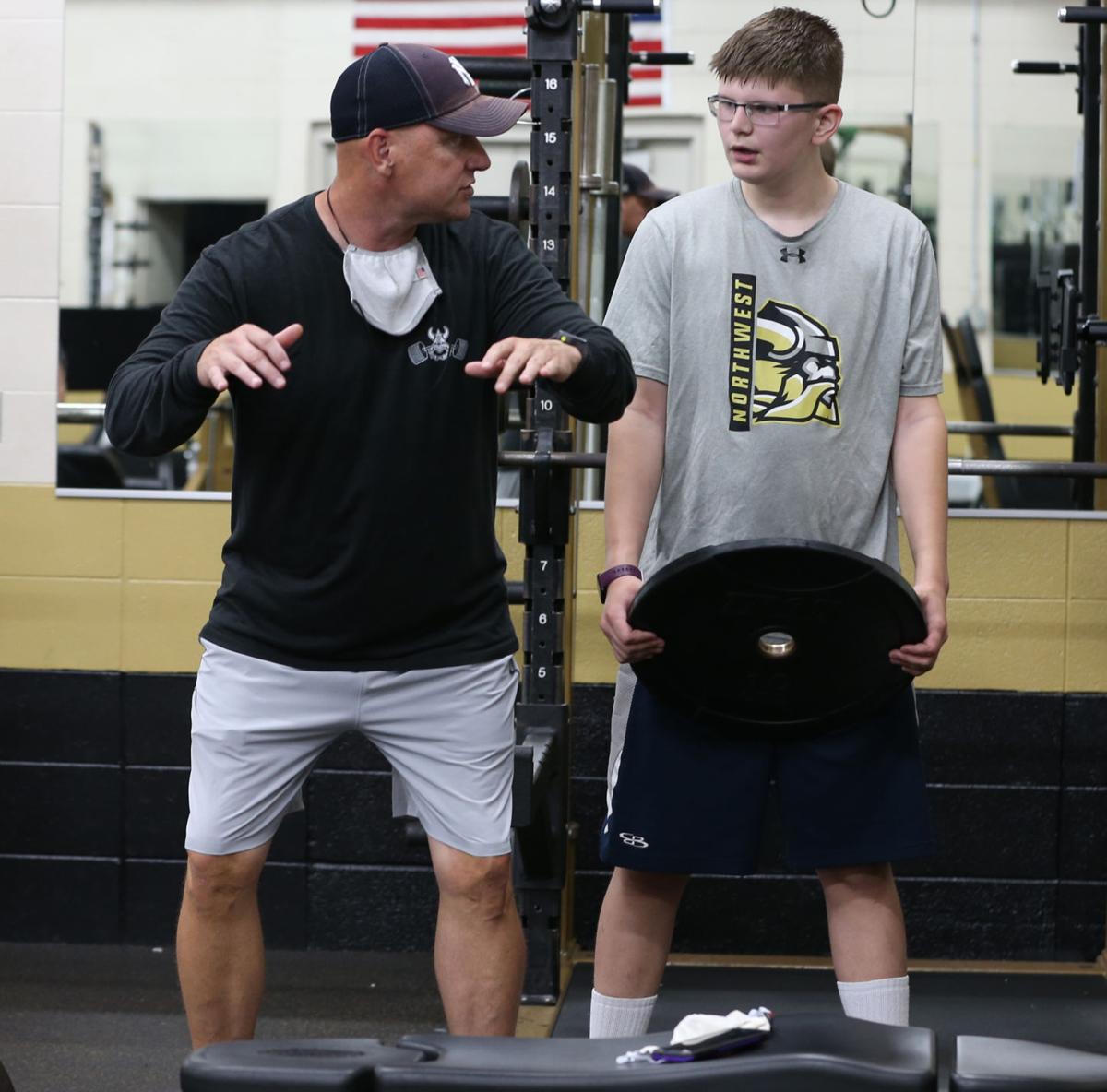 Northwest strength and conditioning coach Troy McNeil tells freshman Dylan Coates what the proper way is to do squat movements during the first day of summer weight and conditioning Monday at Northwest High School. (Independent/Marc Zavala)

Northwest strength and conditioning coach Troy McNeil tells freshman Dylan Coates what the proper way is to do squat movements during the first day of summer weight and conditioning Monday at Northwest High School. (Independent/Marc Zavala)

Athletes from across the state got a chance to start being in the school building for the first time in over two months.

The weight room, gyms and football fields were used for the first time by the athletes since around the middle of March because of COVID-19.

As high school weight rooms opened under strict guidelines set down by both the state and Nebraska School Activities Association, the coaches supervising the workouts came up with strategies to adhere to social distancing and sanitizing requirements, while still maximizing what their athletes can achieve.

Hall county is still in Phase 1 of reopening so there were no more than 10 people to a group at the city schools.

Northwest football coach Kevin Stein said following the guidelines is going to be key for the fall sports seasons.

“It’s a must. If we or anyone else in the state messes up in June or July and someone, either an athlete or a coach, then there is probably not going to be a season in September,” he said. “If we want to play in the fall, we have to do June and July right.”

Each of the three city schools had plans in place.

According to a press release, Grand Island Senior High’s plan was for high school athletes to start training at GIPS facilities in assigned small groups organized by the athletic department. They used the weight rooms at GISH and also at Walnut and Westridge middle schools.

Students were organized into small groups of 10 or less by sport and, in some cases, by position played. A schedule was developed to maximize the space and the time to safely allow for as many student athletes to take part as possible. Approximately 425 students began training this week. Coaches confirmed with students when they are scheduled to attend and where.

Wearing masks or face coverings and cleaning the equipment were among the safety protocols required. Parents were required to sign a waiver to allow their students to participate. The waiver was given out on the first day the student attends.

Each group of students were monitored by a coach at all times. Face coverings were required for all coaches and athletes when arriving, while conditioning and when leaving. The only exceptions coaches allowed are when students are training in large, open spaces where they can spread out, such as practice fields and large gyms.

“We are confident the plan and guidelines designed by Cindy Wells and the Islander coaches meets or exceeds the safety expectations from the state,” GIPS superintendent Dr. Tawana Grover said in the release. “This team has put an incredible amount of time into ensuring they have considered the safety protocols of all involved, as well as the equity of access for students.”

Northwest and Grand Island Central Catholic each had similar plans with coaches monitoring the athletes.

Northwest had six different sessions in the morning and one in the evening with each lasting about an hour. The athletes were to arrive 25-30 minutes before their session and needed to stay in their cars until they got checked in. The coaches took their temperatures and if they were over 100.4 degrees, they were sent home.

On Monday, they had about 36 athletes per session and were put into four groups of 8-10. They put one set of athletes in each of the weight rooms, while two more were sent outside for conditioning on both ends of the track with a coach. After each sessions, either the coaches or athletes touched everything up with sanitizer for the next session.

GICC had four sessions during the morning from 7:30 a.m. to noon and had another one in the evening on Monday. They started with a group doing agilities for about 20 minutes, then do weight training for 35 minutes. When the first group got into the weight room, another group started another agility session with a short break before doing weights.

They also used a system checker for the health of the athletes as well.

Stein said he was excited to see the athletes after not being around them during the spring.

“Coaches are excited to get going again because they love it,” Stein said. “Kids want to do well in the fall, winter and spring and they also know this is a vital time to get bigger, faster and stronger. And they want to get back in and get some normal things back in their life as well. But we can’t just turn them loose. We’ll have to be smart about this.”