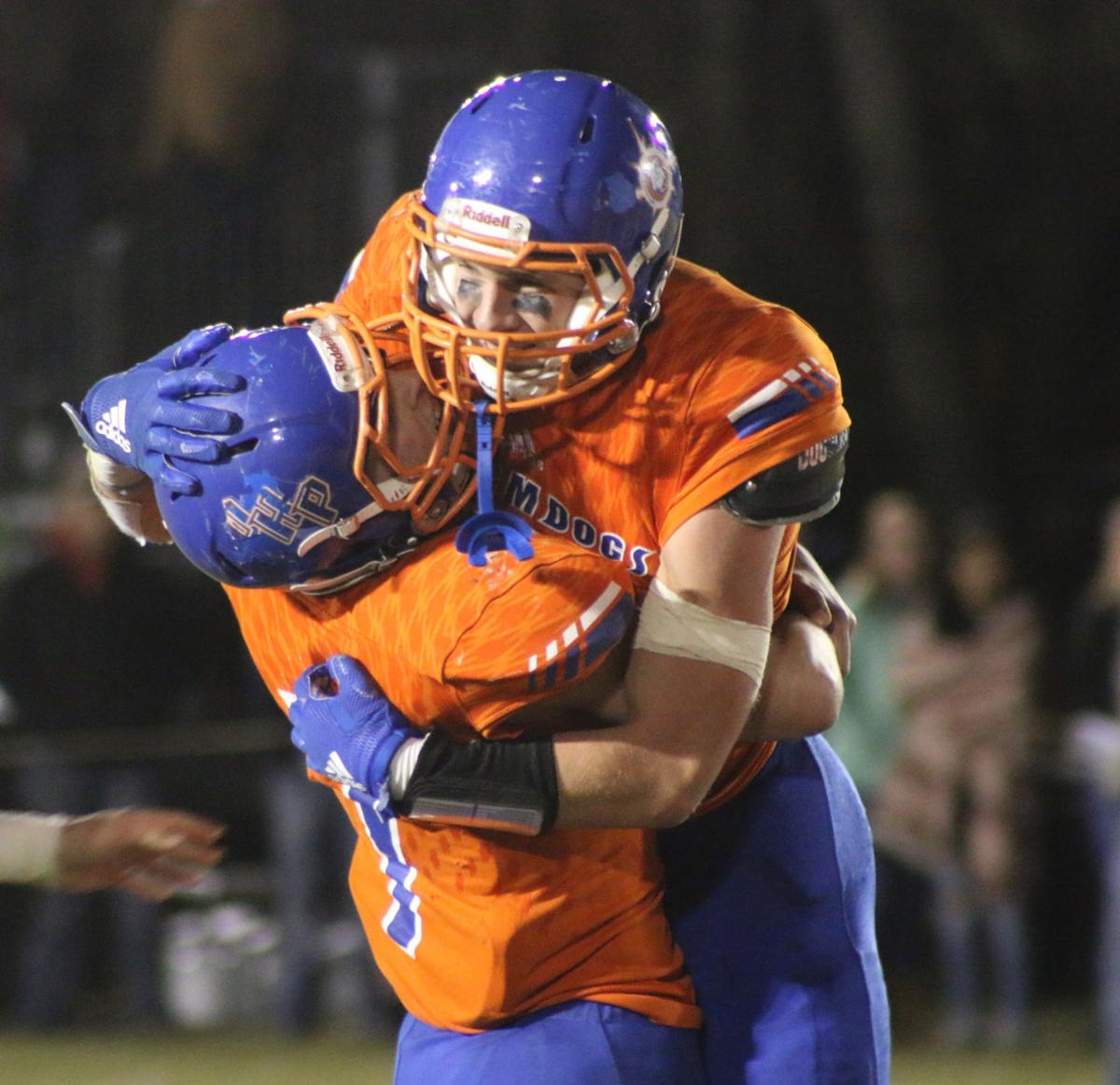 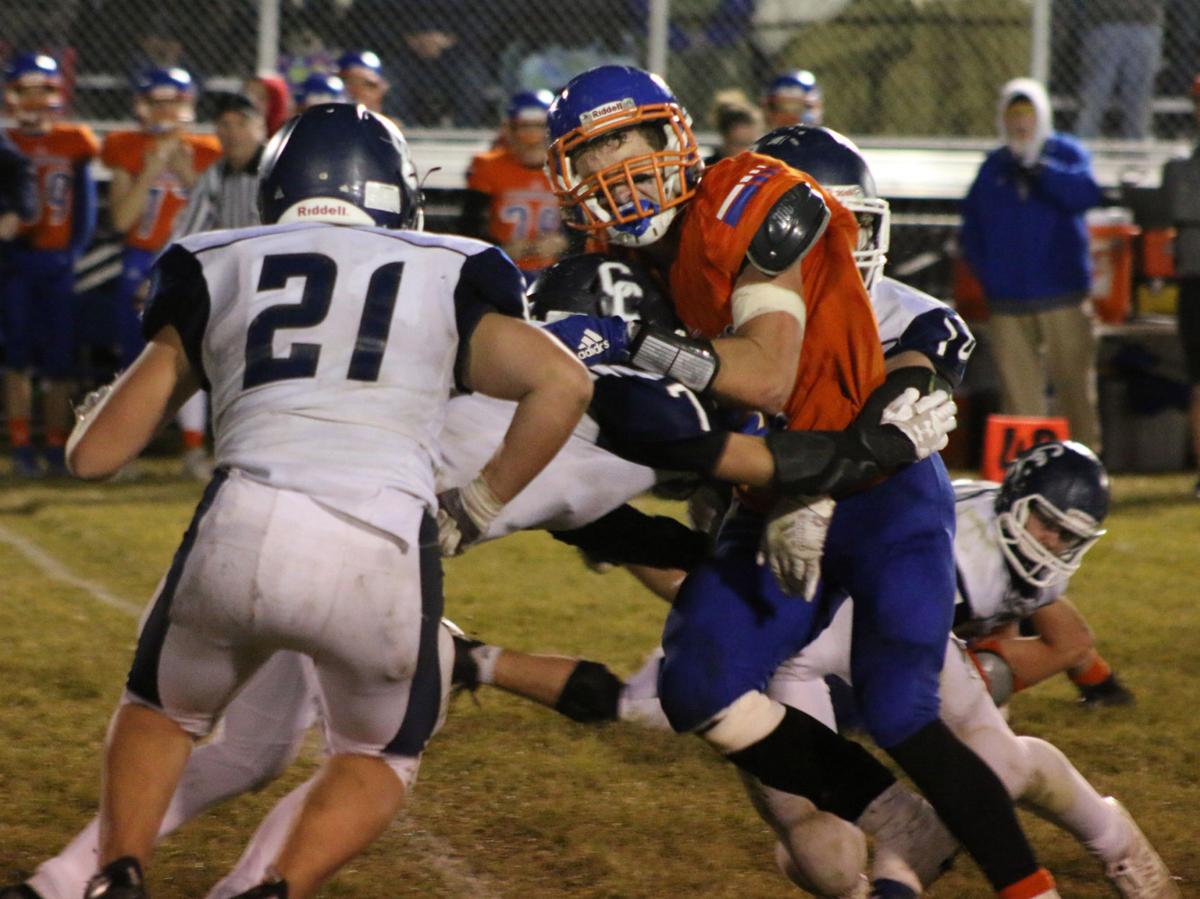 Cross Count's Issac Noyd (7) and Carter Seim (10) sandwich Osceola/High Plains' running back Keaton Van Housen Monday night in Clarks. The Stormdogs won the game and will advance to the championship game. (For The Independent/Josh Salmon) 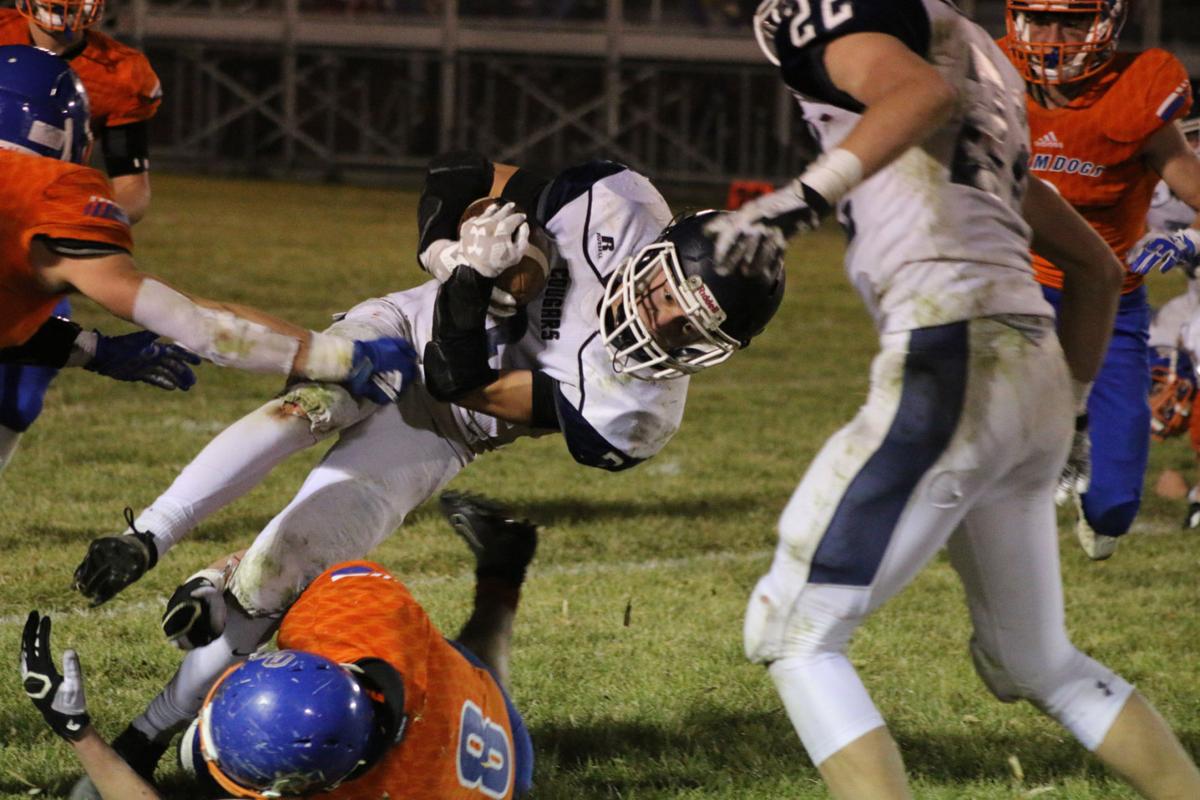 Cross County running back Issac Noyd has his legs knocked out from him during Monday night's Class D-1 semifinal. The Osceola/High Plains won the game 34-30.

Cross Count's Issac Noyd (7) and Carter Seim (10) sandwich Osceola/High Plains' running back Keaton Van Housen Monday night in Clarks. The Stormdogs won the game and will advance to the championship game. (For The Independent/Josh Salmon)

Cross County running back Issac Noyd has his legs knocked out from him during Monday night's Class D-1 semifinal. The Osceola/High Plains won the game 34-30.

Trailing 30-27 with 5:43 to play, the Stormdogs (10-2) drove 59 yards on 10 plays — all on the ground — to punch in the go-ahead score on Van Housen’s 3-yard TD run with 1:28 remaining. The Cougars (7-5) attempted to answer, but Cael Lundstrom’s deep fourth-down pass attempt to Christian Rystrom fell incomplete with 56 seconds left and the celebration, which included a postgame fireworks display, was on for OHP.

Despite falling behind for the first time in the game on Lundstrom’s 23-yard TD pass to Rystrom and Carter Seim’s two-point conversion run with 5:43 to go, Stormdogs co-coach Greg Wood said his players never panicked.

“All year, our theme or motto has been, ‘next play up,’” Wood said. “Early on this season, I think we were so worried about getting behind a little bit instead of taking care of business. Later in the season, we have had a different attitude — we were down against Creighton and we were down against Howells-Dodge and we continued to battle.

“This wasn’t any different. We got the ball in our offense’s hands and when you’ve got (Van Housen) on your side, it gives you a lot of confidence.”

Van Housen carried the ball on eight of 10 plays during OHP’s game-winning drive. The 5-foot-11, 180-pound senior had first-down runs of 13, 14 and 8 yards prior to his 3-yard TD that helped send the Stormdogs to next Monday’s state championship game against Burwell at Memorial Stadium in Lincoln.

“Keaton Van Housen is a special player, who has done an amazing job this whole season,” Wood said. “He was a kid who got injured a little bit at the tail end of last year, going into our second round of the playoffs, and tonight he was hitting on all cylinders.

“I’ve got to give props to our line because those holes do not open up without them. They have done an amazing job all year long.”

Wood’s team had so much confidence in its offensive line that it didn’t attempt a single pass in the game, rushing 58 times for 343 yards. Dylan Soule had a pair of first-half TD runs and finished with 45 yards on 11 attempts, while Carter Boden rushed 11 times for 43 yards for OHP.

“All the credit in the world to them,” Cross County coach Hayden DeLano said of the Stormdogs. “We didn’t get a stop when we needed to and they did,

so they played their hearts out and they deserve to be down in Lincoln. This stings a little bit, but we’re proud of how far we’ve come.”

Cross County was one defensive stop away from possibly avenging a 52-18 loss to OHP on Sept. 27. Down 21-6, the Cougars gained momentum right before the intermission as Lundstrom’s 29-yard pass completion to Cory Hollinger set up a 1-yard TD run by Landen Berck, cutting the Stormdogs’ lead to 21-14 at halftime.

“These kids just play hard,” DeLano said. “We talk all the time about the three Es — effort, energy and execution. We didn’t execute very well in the first half, but our effort and energy are always good.

“They believe in each other and they play extremely hard. It gave us a fighting chance and that’s all we can ask for.”

After a 55-yard TD run by Van Housen put OHP ahead 27-14 with 8:26 left in the third quarter, Cross County got back into the game when Berck recovered a fumble at his own 29-yard line. A 31-yard run by Isaac Noyd set up a 1-yard TD sneak by Lundstrom and a two-point conversion run by Seim cut the Cougars’ deficit to 27-22 with 52 seconds remaining in the third.

Cross County stopped a fake-punt attempt by OHP at its own 35 with 10:06 to play. That led to the Cougars pulling ahead 30-27 on Lundstrom’s 23-yard scoring strike to Rystrom with 5:43 left.

However, Van Housen and the Stormdogs wouldn’t be denied.

“It was amazing from start to finish,” Wood said the contest between the two Polk County foes. “Anytime you get two teams together like that — (Cross County) is a tough, physical team — they’re from the same conference than us and the same district than us, so you knew you were going to get a good show.”

Now, OHP will take a nine-game winning streak into the state championship game after starting the season 1-2. Exactly how did the Stormdogs turn their season around?

“We changed our schemes a little bit here and there, but the biggest thing was just getting our kids together and learning from the mistakes that we made in our losses,” Wood said. “It was just a matter of getting our line to play more physical and realizing that we were just a couple of plays away here and there from winning the games we lost.”