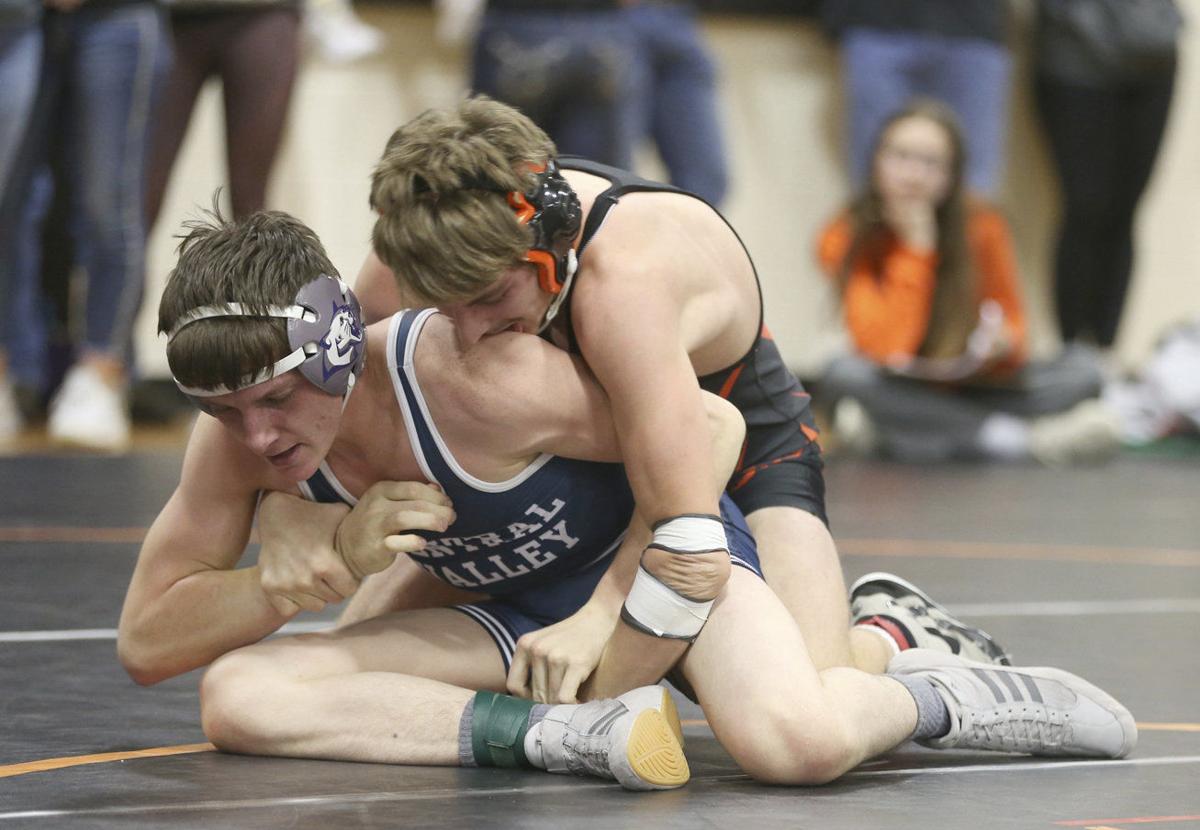 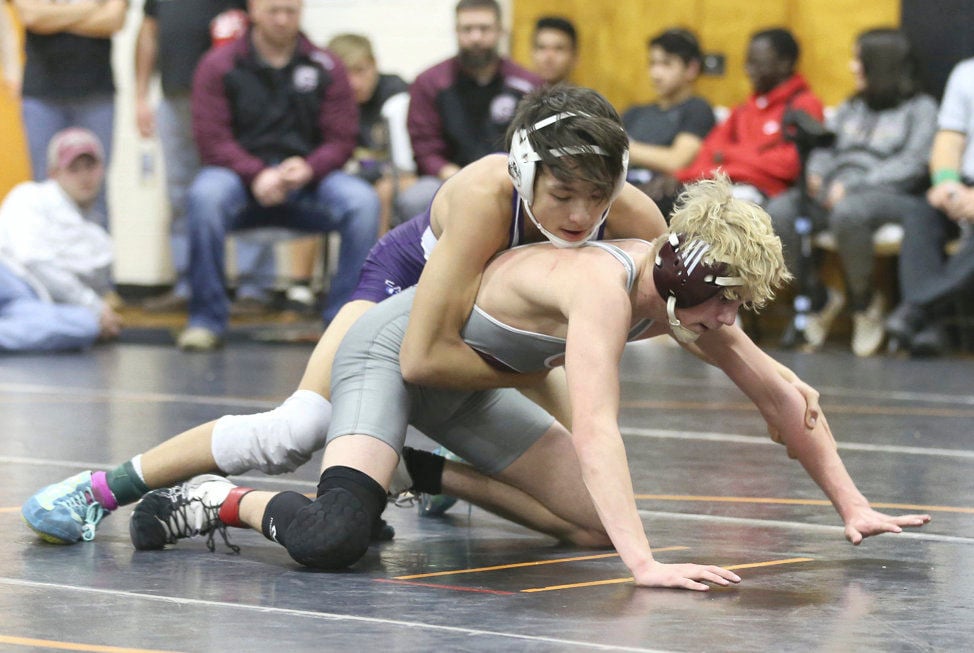 Wood River's Dylan Ancheta gains control of Centura's Mason Kuszak during the 120-pound final at the Palmer Invite Saturday. Ancheta got the pin at 5:10. (Independent/Marc Zavala)

Wood River's Dylan Ancheta gains control of Centura's Mason Kuszak during the 120-pound final at the Palmer Invite Saturday. Ancheta got the pin at 5:10. (Independent/Marc Zavala)

PALMER — Bad elbow and all, Ruger Reimers said he was happy to get a chance to wrestle in the match he got in the Palmer Invite final Saturday.

When the Tiger junior heard the news about Central Valley’s Shaye Wood moving up a weight class, he was more than thrilled.

“I was definitely excited when about that when I woke up this morning,” Reimers said. “He’s a quality wrestler and I know wrestling him is only going to make me better.”

Reimers scored a takedown in overtime during a 2-0 win over Wood, who won the Class D 120-pound title at the state tournament last year.

Neither wrestler gained an advantage during the match. Both wrestlers rode each other out after both chose the bottom position in the second and third periods. Wood had the better opportunities to put Reimers on his back for a few nearfall points but was countered.

“It was all just a blur to me,” Reimers said. “I think it was a double leg but it happened pretty quick. I think it was probably the quickest match I’ve wrestled it seemed like.”

Palmer coach Nathan Glause said Reimers did what he had to do to get the win, especially when the match got into overtime.

“I think there was a little more pep in his step when he got into overtime. He got some great shots during the overtime but was able to get the takedown,” Glause said. “It was fun to see both kids, who know each other very well, wrestle that kind of match.”

Reimers was in pain during the match as he hyperextended his elbow in the match before that. After the match, trainers were wrapping his elbow.

Reimers, who improved to 29-2 on the season, said it’s a great win but knows he still needs to work hard if he wants to achieve his goal of being a state champion.

“It’s a good booster but I know I can’t get a big head about it,” Reimers said. “Anything can happen from here on out. Season is going great so far. I want to be a state champion and I know I have to work hard if I want to be one.”

As for the team title, Wood River won with 187 points, 30 more than runner-up Palmer.

But the Eaglers aren’t a normal participant at the Palmer Invite. They are usually at the Gibbon Invite during this weekend, but that was canceled because of weather. Wood River then was accepted to compete in the Shelton Invite, but then that got canceled as well.

Wood River coach Darin Waddington said he called Glause to see if Wood River could wrestle in the meet.

“Nathan didn’t even hesitate. He said he would get us in and send us the information,” Waddington said. “I’m just happy we got to wrestle this weekend.”

“It was a good day for us,” he said. “We had some kids who have been struggling get some wins today. We had some kids do some great things today. I felt everyone wrestled well for the most part.”

Reimers was one of four champions for Palmer.

Glause said he felt it was good day for Palmer.

“We did a great job overall,” Glause said. “They probably didn’t have the brackets that Ruger had, but they did a nice job of staying in position during their matches.”