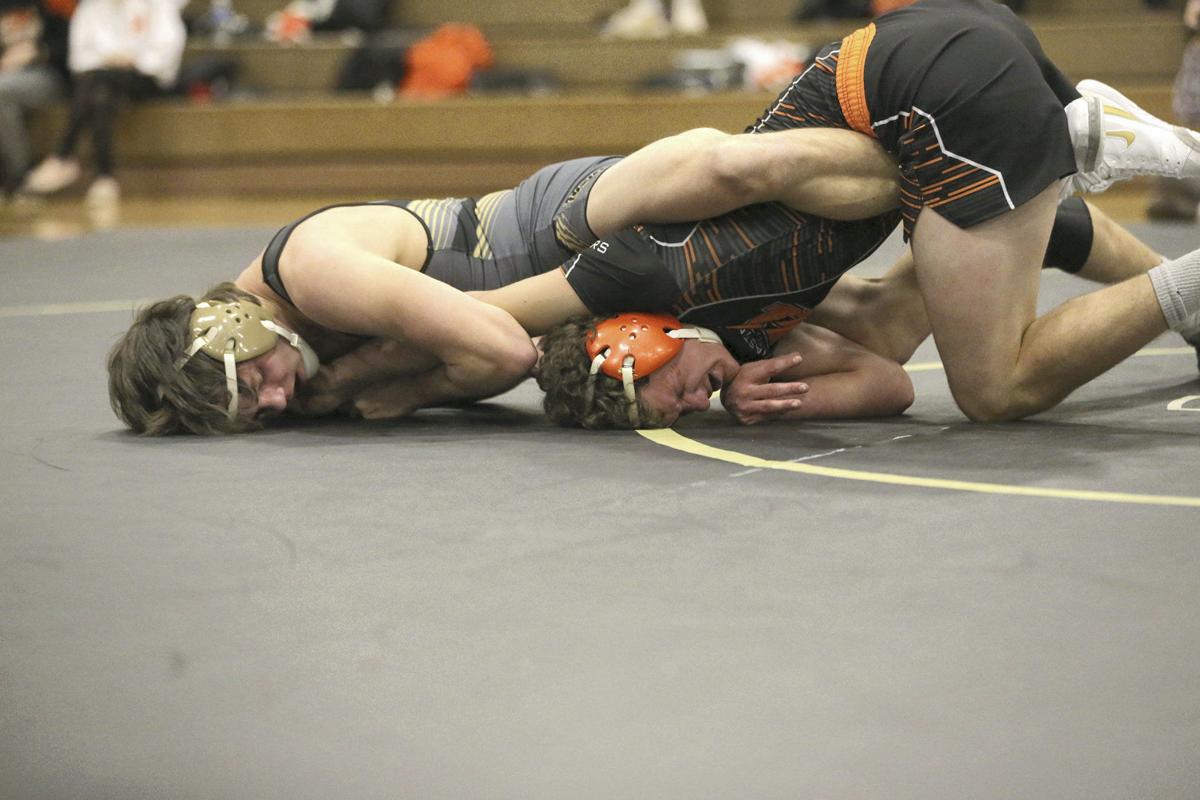 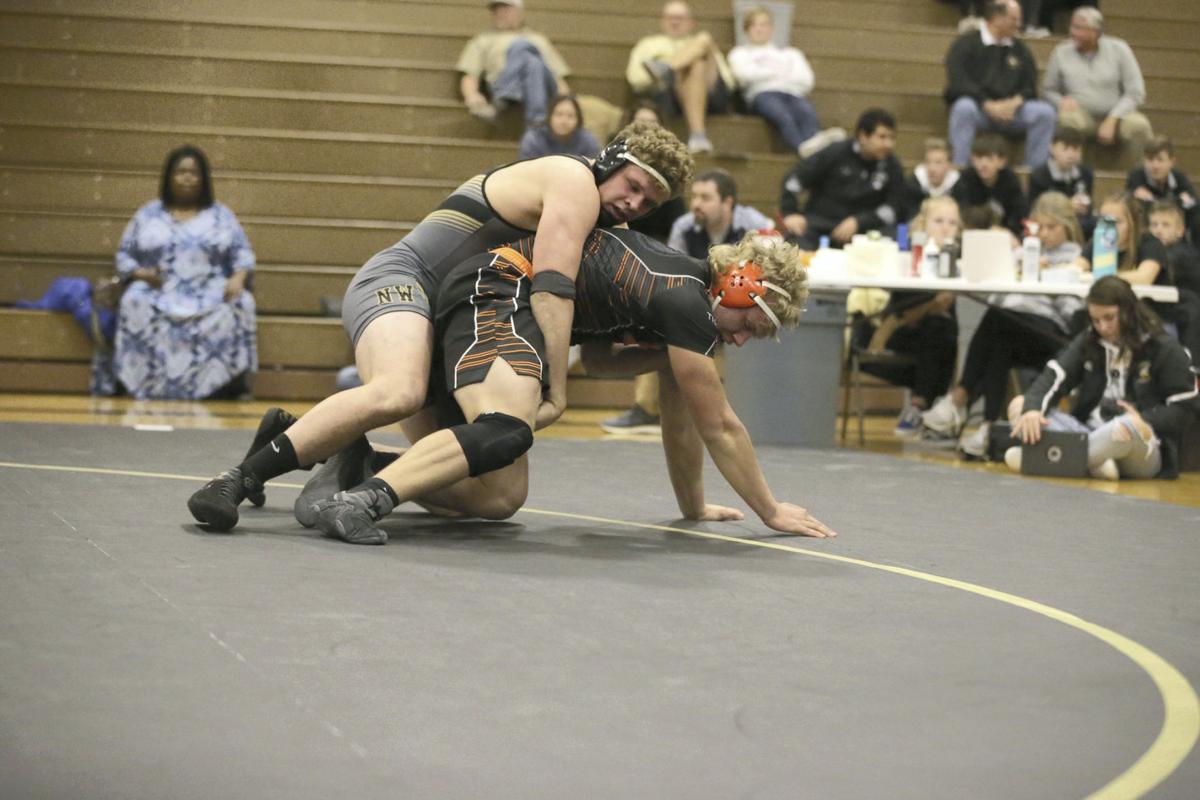 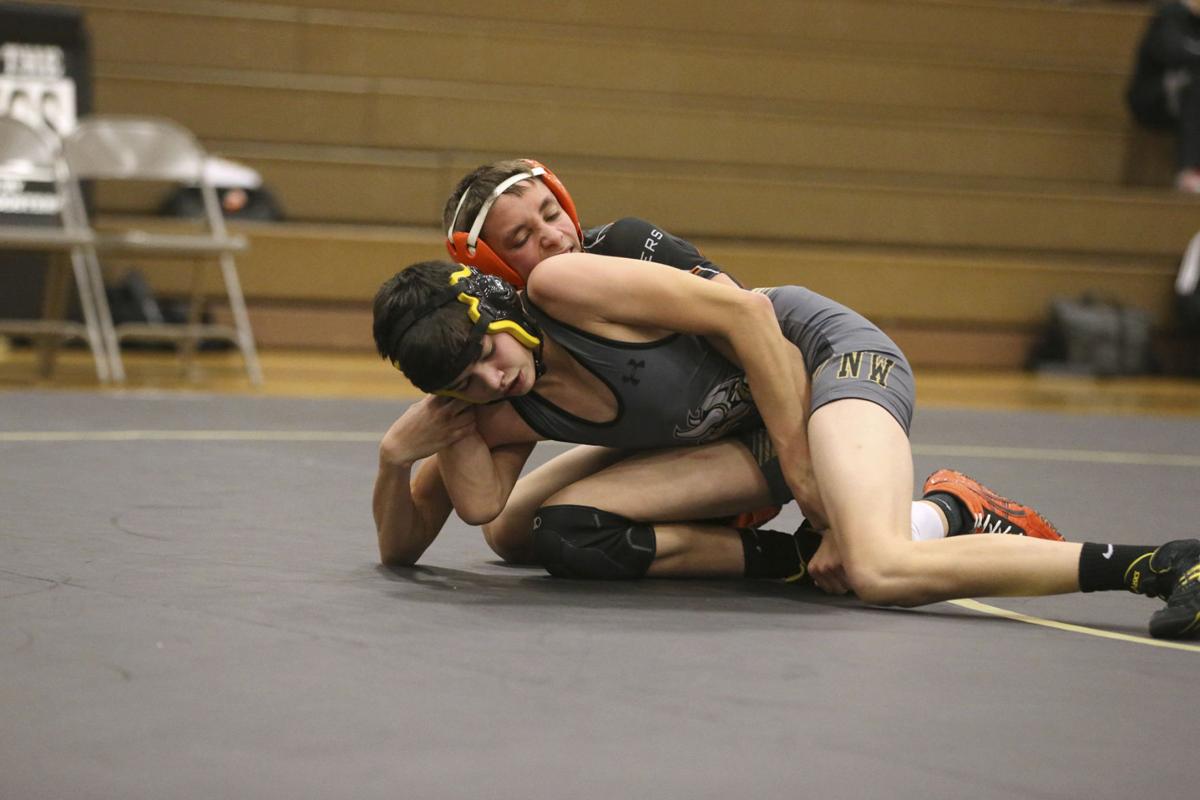 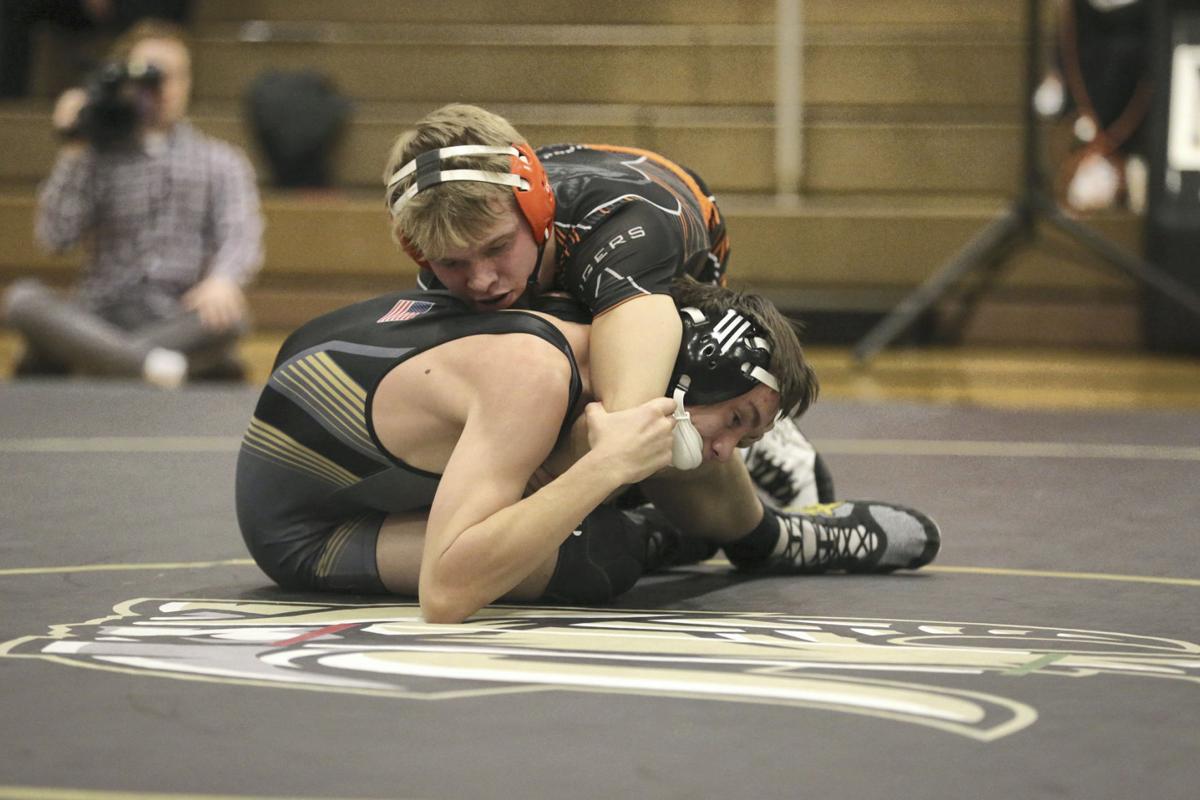 Hastings' Izaak Hunsley tries to put Northwest's Callyb Weekley in a pinning combination Tuesday at Northwest High School. Hunsley got the pin at 2:17 during the Tigers' 60-18 win over the Vikings. (Independent/Marc Zavala) 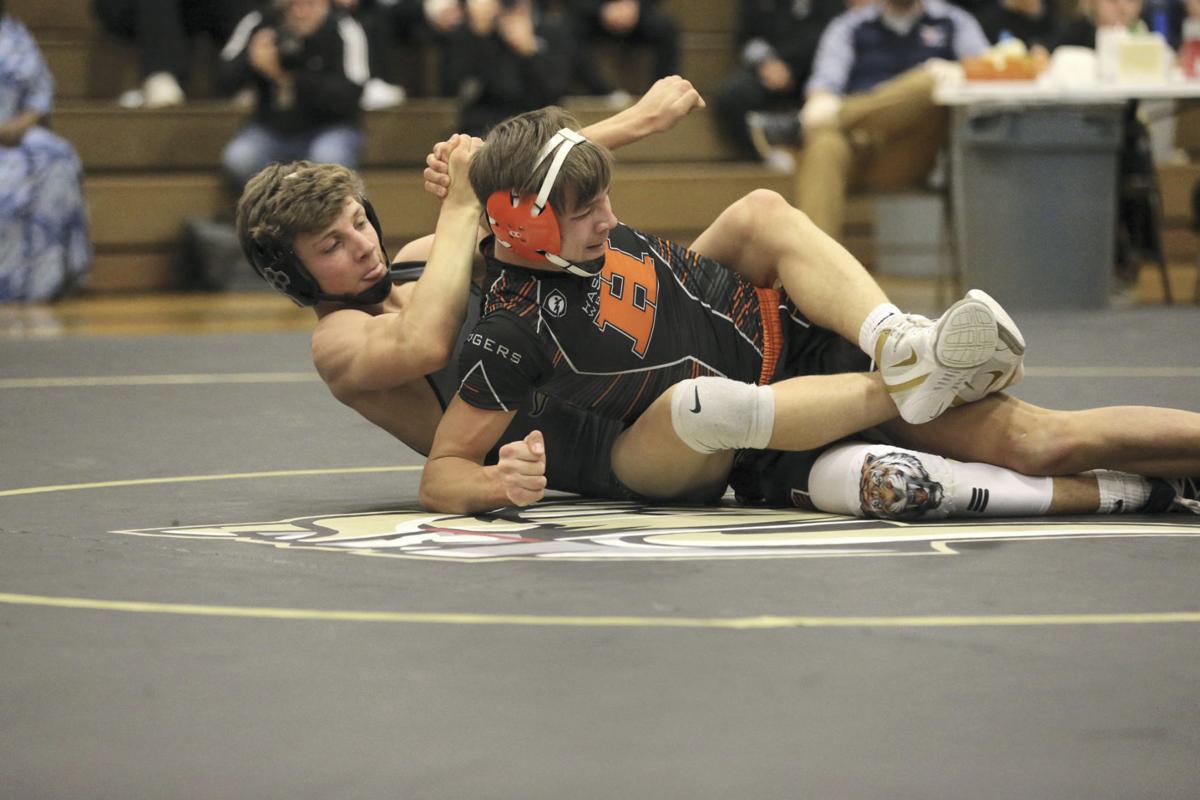 Hastings' Izaak Hunsley tries to put Northwest's Callyb Weekley in a pinning combination Tuesday at Northwest High School. Hunsley got the pin at 2:17 during the Tigers' 60-18 win over the Vikings. (Independent/Marc Zavala)

Plain and simple, Hastings just took it to Northwest.

The Class B No. 2 Tigers (NEBwrestle website) overpowered the No. 4 Vikings for the majority of a highly anticipated dual, taking a commanding 60-18 victory Tuesday at Northwest High School.

In Hastings’ 11 victories, eight came by pins, while two others were either a technical fall (15-plus points) or major decision (8-14 points).

Tiger coach Nolan Laux said he made some changes in the lineup, mainly at 138-152, because of injuries, which included two-time state medalist Mason Brumbaugh. All in all, he was impressed with what he saw, especially with a short week after competing at the Omaha South Invite Friday.

“They all showed up but honestly going into it, I didn’t know what to expect because of the injuries we were dealing with,” he said. “We had to do some shifting in the dual and it worked out to our advantage. It was difficult to prepare for in such a short week trying to cram everything into yesterday but the kids did a great job.”

The Vikings were also missing a wrestlers because of injuries, including Brody Stutzman, Brady Isley and Alex Cabello. Northwest coach Brian Sybrandts said he felt the Vikings were going to have a hard time with the Tigers.

“Once they got the ball rolling, they were hard to stop. When you are breaking new guys, it’s tough,” Sybrandts said. “I was hoping we could keep some of those matches close and they were able to win the close matches.”

However the Tigers took complete control in the next two matches. Austin Yohe earned an 8-0 major decision over Owen Freisen at 145 and Jett Samuelson scored a 4-2 overtime win over Austin Cooley at 152.

Laux said he was pleased with those wrestlers, especially Samuelson. Cooley rode him the entire third period before getting taken down by Samuelson in the overtime period.

“Jett is a fighter. Last week was the first time he got thrown in the lineup. He just goes 100% all the time,” Laux said. “He got ridden the entire third period and I didn’t know how much he would have in the tank. He had the guts to dig deep to win. I thought Blake wrestled well against Quandt despite getting pinned

“Austin matched up very well with Friesen and wrestled great.”

For Northwest, Grady Arends earned his 100th career victory by pinning Hunter Anderson in 1:56 at 113. Griess, coming off a fifth-place finish at the Walsh Ironman Tournament in Ohio this past weekend, stuck Blake Davis in 1:41 at 220 to go along with Quandt’s pin.

“Those guys wrestled great for us,” Sybrandts said. “It was good to see Grady (Arends) get his 100th career win. He got after it right away and he usually does that. He and Collin were hungry after not doing well at the Ironman tournament. They felt like they had something to prove. I thought Collin wrestled a smart match with Kile. He was able to get in position to get the pin for us.

“And Grady (Griess) became our win leader this past weekend so that’s a big milestone for him. He just keeps going.”

Both teams will compete in the Flatwater Fracas Friday and Saturday at the Pinnacle Bank Expo Center at Fonner Park.