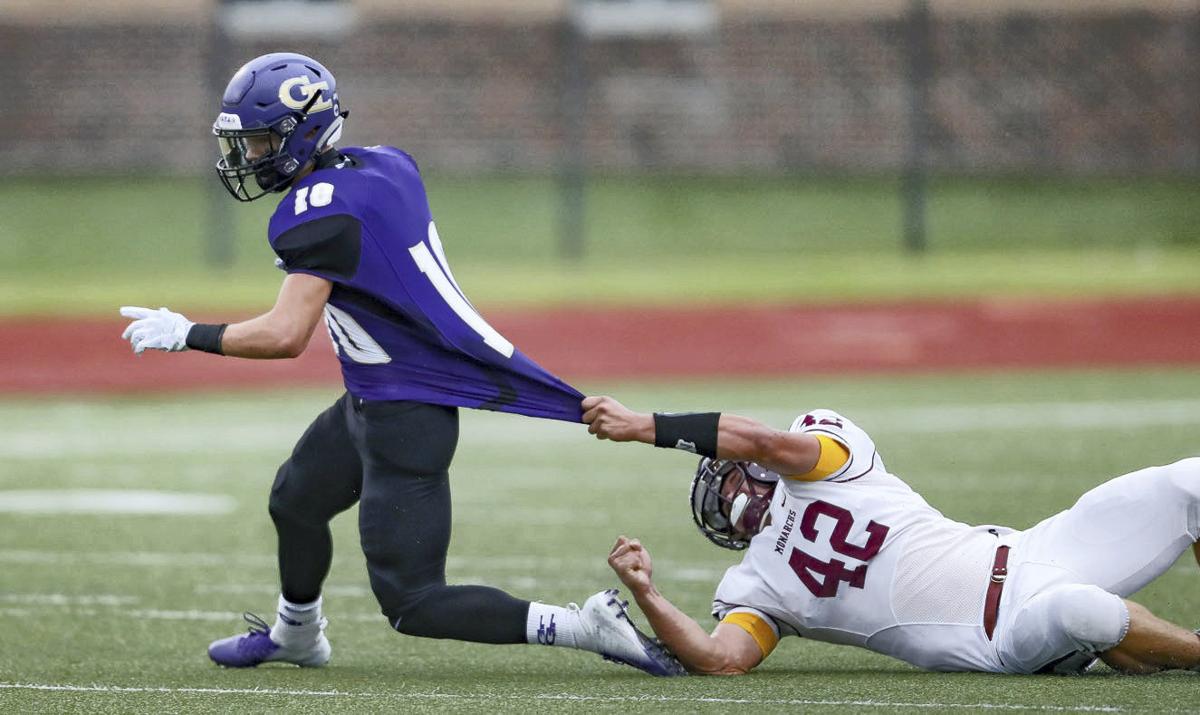 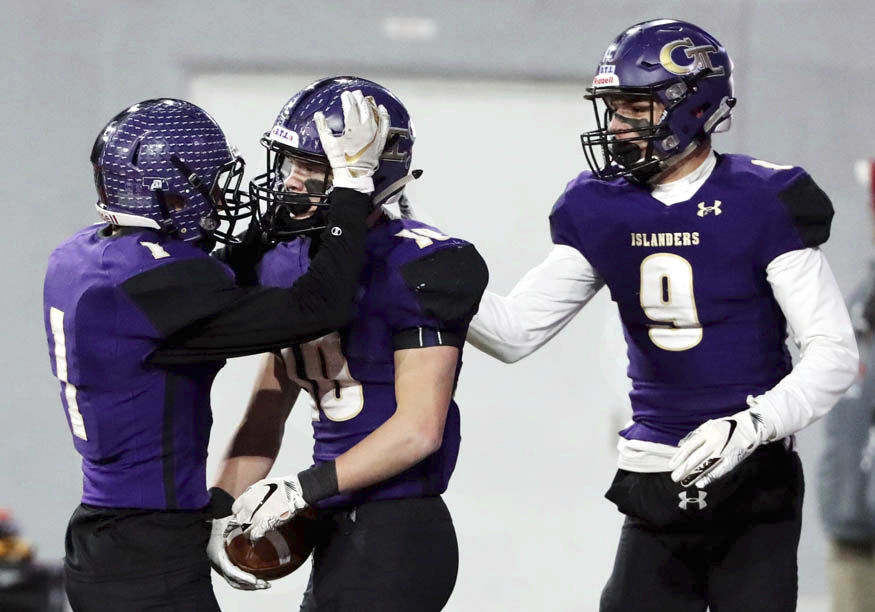 Grand Island Senior High’s Broc Douglass (left) celebrates a touchdown catch with Caleb Francl and Carson Cahoy (9) during the Class A state championship against Omaha Burke last November at Memorial Stadium in Lincoln. All three players return as key contributors for the upcoming season. All three players will be in action when the Islanders host Millard West Friday night.

Grand Island Senior High’s Broc Douglass (left) celebrates a touchdown catch with Caleb Francl and Carson Cahoy (9) during the Class A state championship against Omaha Burke last November at Memorial Stadium in Lincoln. All three players return as key contributors for the upcoming season. All three players will be in action when the Islanders host Millard West Friday night.

With four starters back on offense and five on defense, Grand Island Senior High enters the season with a good foundation of experienced players to build around.

And not only do they have plenty of experience from last year’s 10-3 team that played in the Class A championship, but that experience comes in several key positions.

“It’s good to have experience in certain places,” said head coach Jeff Tomlin, who is 113-55 entering his 17th year with the Islanders. “You need to have experience somewhere, and on this team it happens to be receiver, running back and linebacker positions. That’s good, because particularly at the linebacker positions they have to be so vocal and make calls and checks.”

Caleb Francl — a 6-foot, 175-pound senior — returns at outside linebacker where he led the team with 105 tackles last year. He’ll also be a force on offense at running back where he gained 576 yards and scored 10 touchdowns last year.

Tomlin said having those experienced linebackers is a big plus in Class A where the Islanders will face a wide variety of offenses over the course of the season.

“You can be going (against a) flexbone, one week, which we do, and empty spread the next week and anything in-between,” Tomlin said. “It is really important to have some veteran leadership at the safety position in particular and then the linebacker positions because they get everybody lined up in the right positions and make checks.”

“It’s a different game at the varsity level, so having experience and guys who knows what they are doing gives more confidence to the guys around them,” McKinnis said. “It lifts the newcomers up and elevates their play, so it’s a great asset.”

The skill positions are the experienced group on offense. Joining Francl as a big playmaker was Douglass, who had 53 catches for 907 yards with seven touchdowns. He also had 462 yards on punt returns and 376 on kickoff returns.

“Having Caleb back, everybody has confidence in him that he’ll score every time he touches the ball,” said McKinnis, who was a backup receiver last year. “Broc Douglass is also a huge weapon for us coming back.”

Kyle Sextro (5-11, 185) returns as a starter at inside receiver after having nine catches for 118 yards with two scores.

He said the offense has been making good progress during practices.

“I’ve been really happy with how everything is going,” Sextro said. “At the start, it wasn’t iffy at all, but it wasn’t the start we always want. As we got going things picked up.”

Carson Cahoy (6-3, 180) started at receiver last year and took over as starting quarterback for a pair of games while Cole Evans was injured. He was in a preseason battle with junior Jaden Jurgensmier for the starting QB spot.

“Carson Cahoy and Jaden Jurgensmier are co-No. 1,” Tomlin said. “They’re still competing for that job and both are doing good things. We’ll kind of see how that plays out. Coach (Russ) Harvey grades them every day on their performance, so they’re making each other better. It’s a good competition that makes our team better.”

The key experience theme continues for Grand Island on special teams, which is coached by a man picked to be a Shrine Bowl assistant next June.

“Coach (Paul) Cloutier does such a great job of coordinating our special teams,” Tomlin said. “Our kids are well-prepared.

“We do have some key guys back. Matt Jurgensmier was our punter last year. Ace McKinnis was our snapper. Jackson Sikes kicked for us. Sterling Rauch kicked a little bit for us. We have some key pieces in the skill positions in special teams, and then we have enough other kids who are tough kids and fill in those kickoff spots and punt return spots.”

Those returning starters have new roles to fill. The senior leadership on last year’s team was often mentioned as one of the main reasons the Islanders went on their deep playoff run all the way to Lincoln’s Memorial Stadium.

“Last year’s seniors were so great at leading,” Sextro said. “Taking on those roles and trying to fill their shoes is a big part, but we’re all doing a good job.”

Tomlin said: “I’m really proud of (this year’s senior class). They’ve stepped into that role and embraced it, and I’m really pleased with them.

“It’s a process. They’ve got to gain confidence too and create their own identity because every team has its own identity. I think it’s going in the right direction, and I think the leaders who have been established are doing really well.”

The focus of the Islanders has remained steady year after year under Tomlin’s watch. That won’t change just because the program made a long-awaited return to a championship game nine months ago.

“We’re focused on the process of how we can get better every day, the little steps that our seniors set every year,” Tomlin said. “We feel like if we can follow that recipe, then we’ll get the outcomes that we desire at the end.

“I don’t encourage focusing on (game) outcomes too much. There are too many things out of our control. So we’re just focusing on getting better every day and doing the right things in the weight room and the classroom and in the community. The little things lead to good big things later on.”

While the team has shut the door on last year and is 100% focused on the upcoming campaign, there are benefits from playing four high-pressure playoff games that can only help out in the following season.

“We know how much fun it was getting that deep, and we want to do it again,” McKinnis said. “Just having guys back who have experience playing deep in November will help everybody stay locked in and focus on our goal.”

Grand Island again enters the season with modest expectations from the outside. Ranked No. 9 in Class A, the schedule includes only one game against another preseason ranked team — No. 7 Millard West at home on Oct. 11.

But that doesn’t mean that there won’t be challenges week-in and week-out, and that starts with Friday’s 7 p.m. opener at traditional rival Kearney. The Bearcats will be looking to avenge last year’s 46-0 loss.

“The scale tips to five road games, but that’s why our kids prepare so hard,” Tomlin said. “The good thing about the second year of a cycle is you’re pretty familiar with teams. The preparation if there wasn’t a coaching change isn’t easier, but it is more efficient.

“It’s a very challenging schedule, and we know that we have our work cut out for us.”