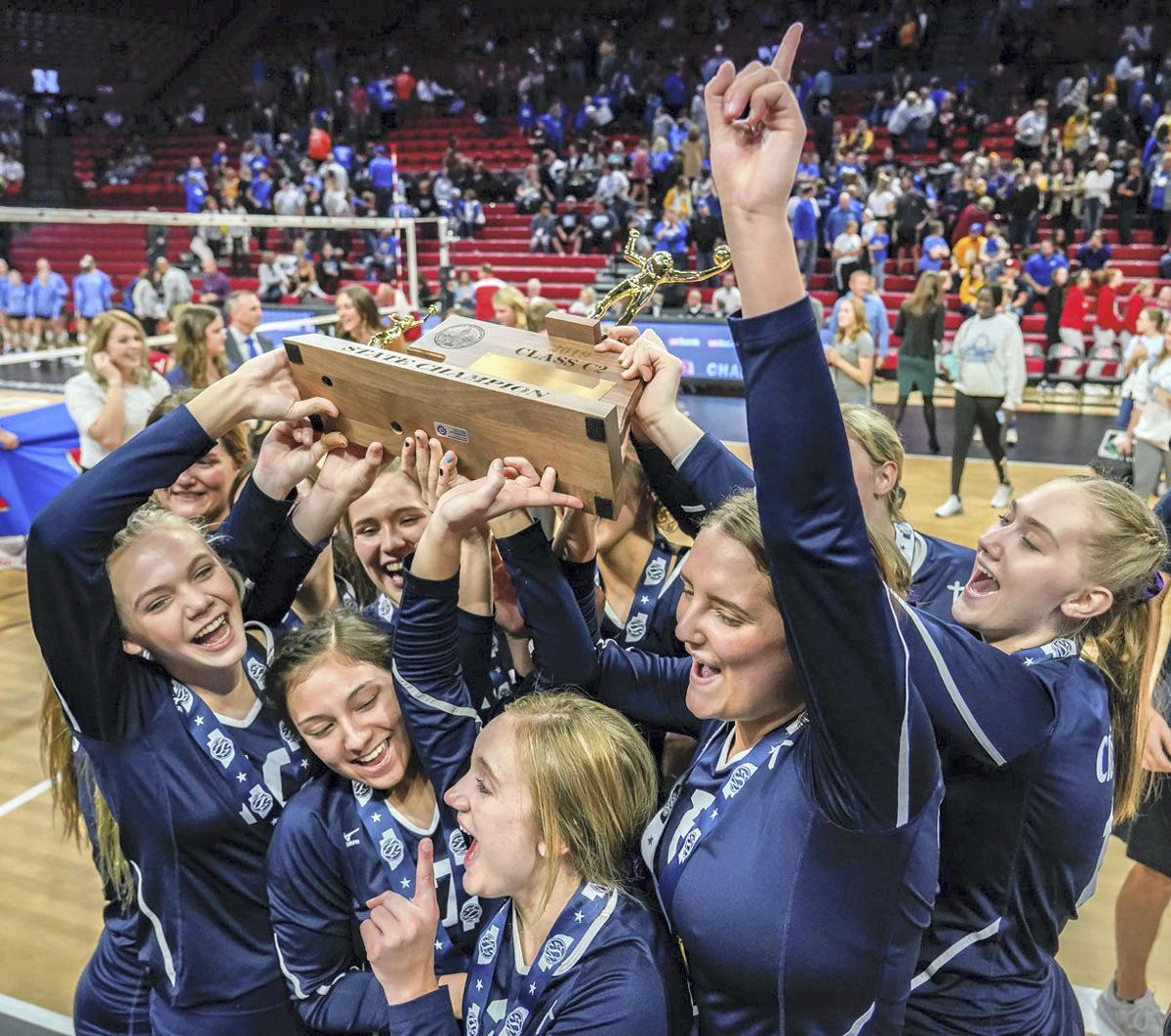 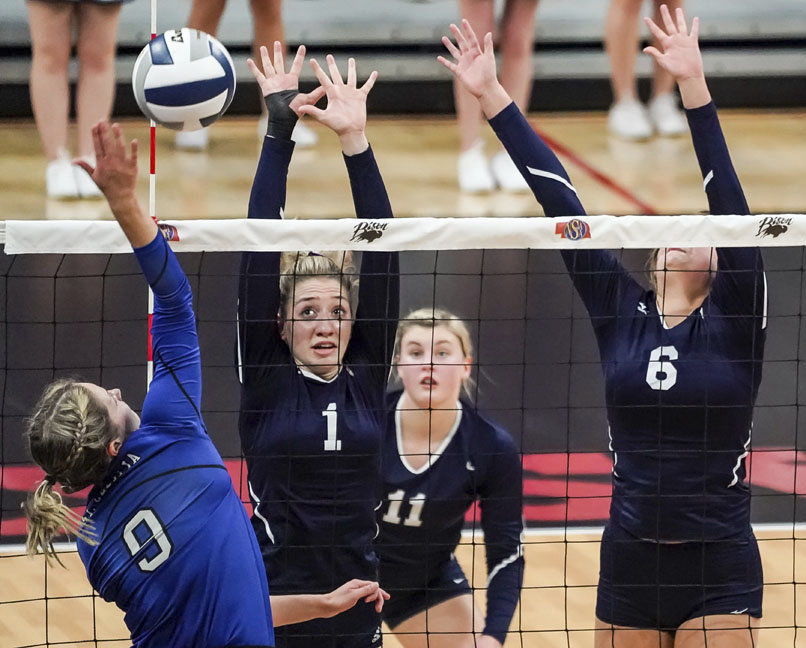 GICC's Lauryn Willman goes up for a block against Hastings St. Cecilia Saturday in Lincoln. (For The Independent/Aaron Beckman) 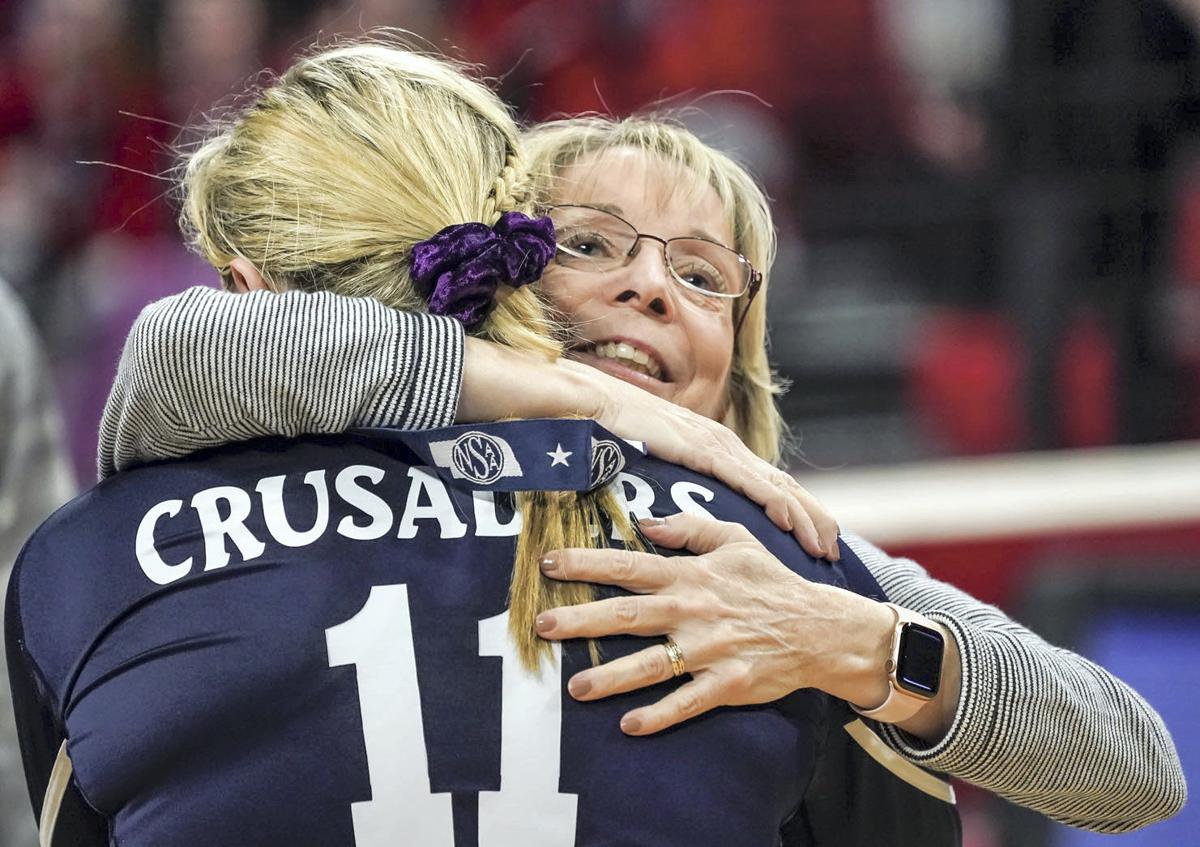 GICC's Lauryn Willman goes up for a block against Hastings St. Cecilia Saturday in Lincoln. (For The Independent/Aaron Beckman)

So why not get the only win when it matters?

That’s what the No. 3 Crusaders did in the Class C-2 state championship match.

The win gave GICC its 10th state championship and first since 2010.

“Every time we played them, we kept getting closer to them,” GICC senior setter Katie Maser, who dished out 32 assists, said. “We just came out and played as a team and left it all out there.”

Crusader Sharon Zavala said playing the Hawkettes that many times, as well as other good competition, made her team better.

“We found out every time what we needed to improve on,” she said. “Had we not played them, things might have been different. The kids just improved throughout the season and we peaked at the right time. Tonight, we played well enough to win. We stayed aggressive the whole match. That was key.”

St. Cecilia coach Alan VanCura said GICC played the better match in the state championship. The Crusaders led the Hawkettes in almost every category, including kills (39-35), blocks (10-6) and ace serves (9-3).

“They played almost a perfect match,” he said. “We didn’t play the best we could play but you have to give credit to Central Catholic. They beat us in the serve receive game and in the blocking game. It just frustrated us and when a team doesn’t make errors, it makes it tough to beat. And I think we would have had to play the perfect match to beat them today. They just played so well.”

And just like in their other two matches during the state tournament, the Crusaders relied on their serving. They missed only eight serves during the match. Lauryn Willman and Maser each led the way with three ace serves.

“Our serving was really key for us,” Zavala said. “We served aggressive and when you do that, it helps your offense get going.”

GICC led throughout the entire first set but St. Cecilia always made a run. Gracie Woods had back-to-back ace serves to give GICC a 20-16 lead. But the Hawkettes answered with an 8-4 run to tie it at 24-all. But after a Woods kill, Lauryn Willman delivered an ace serve to give GICC a 1-0 lead.

Then Maser helped spark a Crusader comeback in the second after trailing 10-4. She was part of a 9-1 run with two ace serves that gave them a 13-11 lead.

But Makenna Asher kept St. Cecilia in the match with three kills, with her final one tying the match at 20-all. But GICC took a 2-0 lead thanks to two Hawkette errors during that span.

“If we could have won that first set and not given away that lead in the second, it might have made a difference in the match but GICC just kept making plays,” VanCura said.

It was all GICC in the third by getting out to a 20-10 lead. Allison Kalvoda pounded down her team-high 13th kill to give the Crusaders the championship.

Maser, who has been the Crusader setter since she was a freshman, said the state championship is no better way for her and her senior teammates to finish their careers.

“It’s been a great four years and this is just the best feeling in the world,” she said. “It’s just awesome that we were able to get it done today.”

Tori Thomas led the Hawkettes, who finished the season at 34-4, with nine kills, while Chloe McCauley and Katherine Hamburger each chipped in eight kills. Asher had 17 assists.