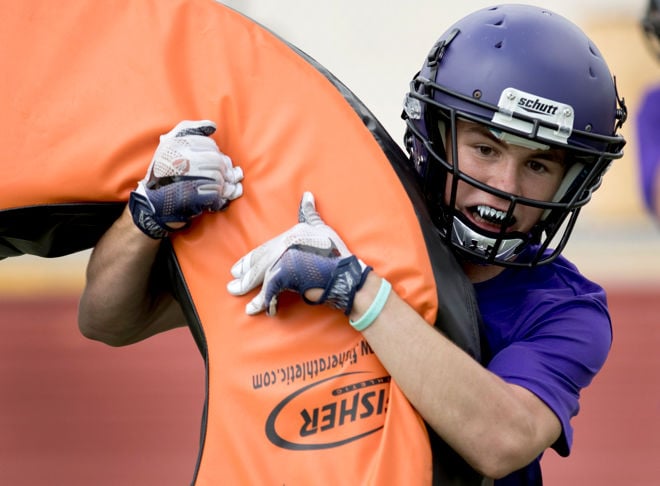 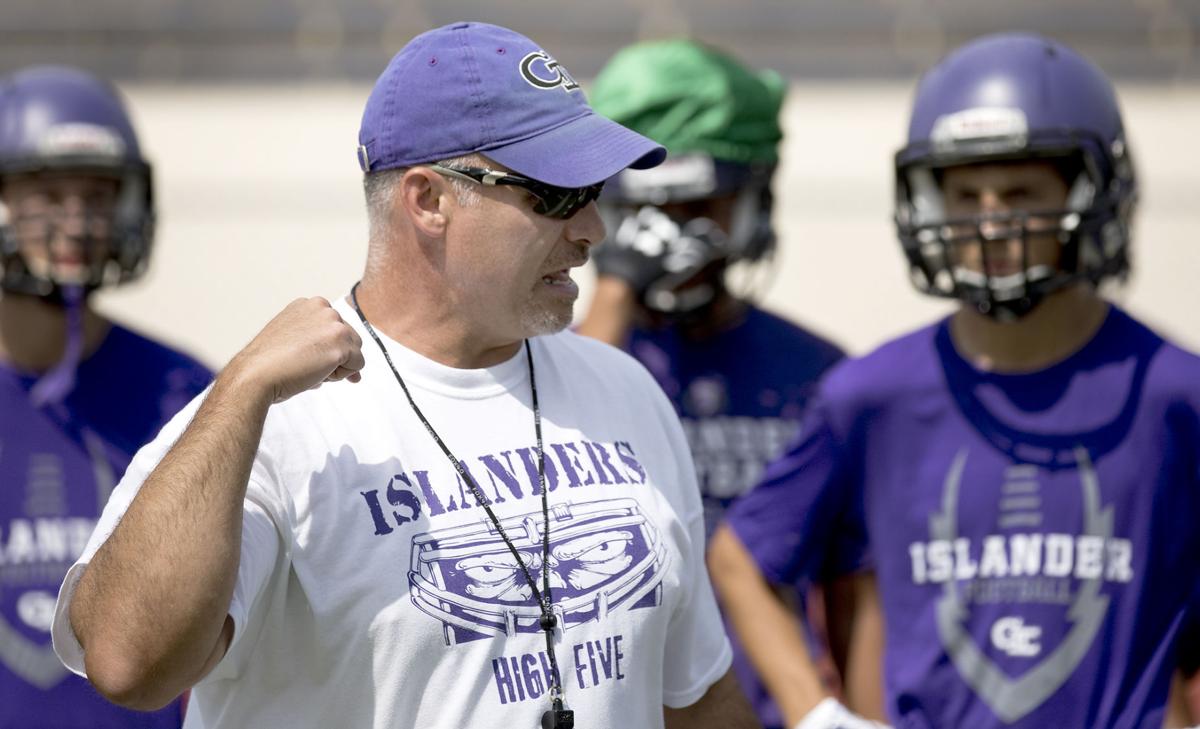 Islander head coach Jeff Tomlin talks to a group of defensive backs for a drill Monday at Grand Island Senior High during the first day of fall practice. 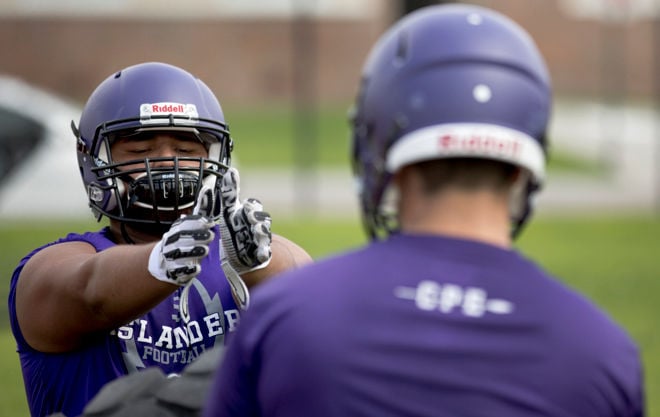 Cristian Aparicio extends his hands during a blocking drill Monday at Grand Island Senior High during day one of practices. The drill has two lineman stand across from each other and block a large tire back and forth to perfect form. (Independent/Zach Mayhew)

Islander head coach Jeff Tomlin talks to a group of defensive backs for a drill Monday at Grand Island Senior High during the first day of fall practice.

Cristian Aparicio extends his hands during a blocking drill Monday at Grand Island Senior High during day one of practices. The drill has two lineman stand across from each other and block a large tire back and forth to perfect form. (Independent/Zach Mayhew)

By the time the first day of practice wrapped up around 12:30 p.m. on Monday, the Grand Island Senior High football team had already put in plenty of work.

The Islanders got official preparations underway for the 2017 season with a walk-through at 5:45 a.m. Following a mandatory three-hour break, a 2 ½ hour practice took place under pleasantly cool conditions at Memorial Stadium.

“It’s exciting to get out here and is a lot of fun,” Islanders coach Jeff Tomlin said. “Obviously the weather is about as good as you could possibly hope for, and the kids were really excited and enthused. So it was a really, really good first day.

“We got a lot of things polished up and worked on alignments. We’ll get little teaching things done today and tomorrow before we get pads on.”

The schedule for practices to start the season is starting to become routine again for coaches and upperclassmen. Over recent years, new rules have been installed for heat acclimation, regulating the number of contact practices and mandating breaks between a walk through and a practice.

Long gone are the time when the term “two-a-days” could be used to refer to the start of preseason practices.

“They’re all pretty good rules and I think everybody is following the spirit of them,” Tomlin said. “We’re still getting what we need done, but it makes your summer even that much more important.

“You need to make sure you’re getting things done at camps so when you do lose a little bit of time from what our old two-a-day schedules used to be, then we’re not any worse off than what we were.”

With Grand Island Senior High starting classes a week later than in the past couple of years, morning practices will take place throughout the first week for the Islanders. Since teachers don’t report until next week, the coaching staff can use the afternoon after practices to game plan and study film.

With high temperatures forecasted to remain in the upper 70s for most of the week, players will enjoy much cooler practices than usual during the first week. That’s especially the case for the morning practices that were scheduled months ago in anticipation of the usual August heat.

But the work towards a successful season didn’t start for teams on Monday. Plenty of work took place throughout the summer, and Tomlin liked how things went for the Islanders prior to Monday.

“I think we’re coming into camp really fit – one of the fitter groups we’ve had based on our testing results and our conditioning week,” he said. “What we put them through there they blew through with flying colors, and they’ve had a tremendous attitude in the months leading up to our preparation.”

As Grand Island broke up into different position groups to go through drills during Monday’s practice, the amount of experience varied greatly around the field.

“In certain positions, we have a lot and in certain positions we have none,” Tomlin said. “So it’s kind of a balance. We have a veteran secondary returning and a few linebackers who played quite a bit. D-line wise, we’re going to be almost completely new with the exception of one guy.

“Same thing offensively – a lot of offensive linemen are new faces and young faces. Those things take time to develop but we like how they’re progressing. Backfield wise we have some guys who saw a little action, but we have more depth back there this year. We’re going to have to find a couple receivers to replace those guys who carried the load for us last year.”

No matter how much experience there is, each group will be focused on the details during the first week of practice.

“Defensively a lot of it is alignment – make sure you are aligned, make sure you are covering routes correctly, all the basics of your defensive install. You want to get that really ironed out and fine-tuned.”

That process started on Monday. Now there are just 13 more days of practice left until the Aug. 25 season opener at rival Kearney.