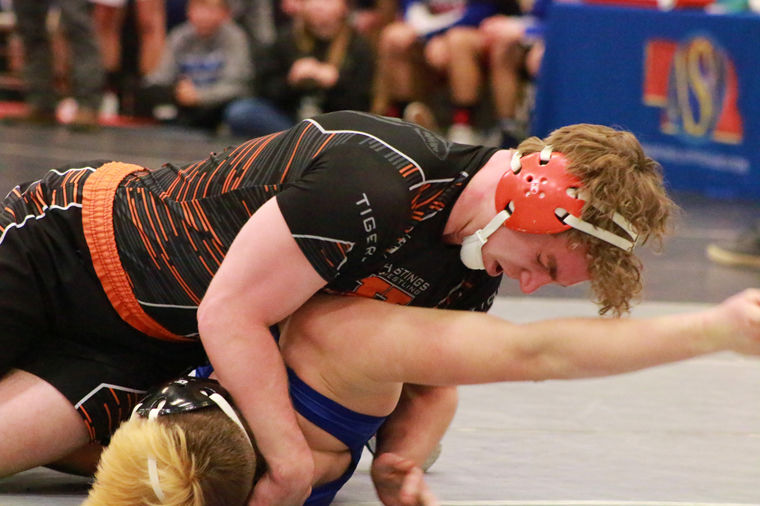 Hasting's Damen Pape wrestles his Bennington opponent during the championship round at the State Wrestling Duals Saturday in Kearney. The Tigers won the Class B state title. 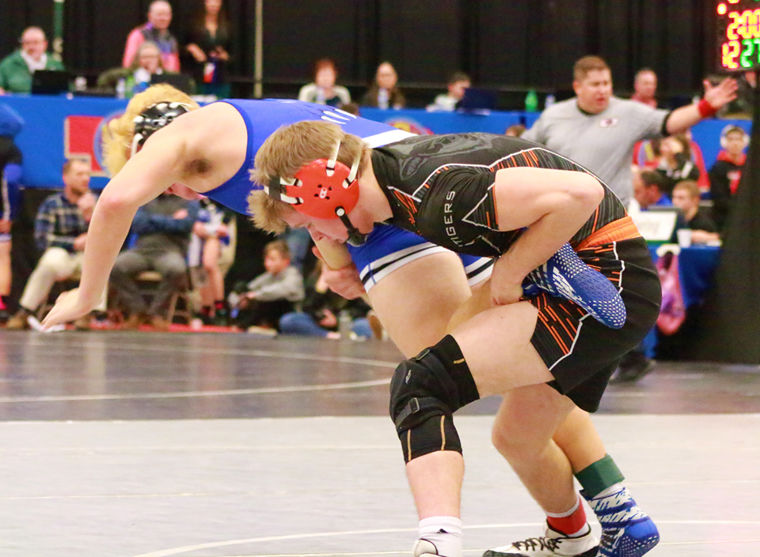 Hastings' Jackson Phelps attempts to pick up his opponent from Bennington during the State Wrestling Duals in Kearney Saturday.

Hasting's Damen Pape wrestles his Bennington opponent during the championship round at the State Wrestling Duals Saturday in Kearney. The Tigers won the Class B state title.

Hastings' Jackson Phelps attempts to pick up his opponent from Bennington during the State Wrestling Duals in Kearney Saturday.

KEARNEY — It had been a while since Hastings had won any kind of a state wrestling championship.

Since 1988 to be exact when the Tigers captured the Class A state wrestling title.

Now Hastings doesn’t have to wait anymore as the Tigers won the Class B duals championship Saturday at the Buffalo County Fairgrounds in Kearney.

The No. 1 Tigers (NSWCA duals) earned that title after defeating unranked Pierce 54-24 in the championship.

“To finally get one feels amazing,” said Tiger senior Damen Pape, No. 1 at 182 pounds. “There’s been so many years where we’ve been close but this year, we’re finally able to get it done.”

And Hastings didn’t waste any time in getting started.

After the Tigers dropped the opening match of the dual, they reeled off eight of the next nine matches to take a commanding 42-12 lead.

“Landon got us going and everyone just seemed to pick it up after that,” Laux said. “It was great to see that.”

Hastings had plenty of confidence heading into the finals.

The Tigers beat No. 2 Bennington 41-28 in the semifinals.

The Badgers grabbed an early 18-9 lead, but Hastings won six of the final eight matches with four pins and two major decisions.

One of those matches included Pape almost getting taken down by No. 3 Luke MacDonald in the opening minute. But Pape got the pin in 2:23 where he let out a yell to the Tiger bench.

“It caught me off guard. That would have been the first I’ve given up in two years,” Pape said. “I seemed to be more hyped up from that match than I ever been. But it felt nice.”

Laux said that getting the win over Bennington was nice, but he knew there was still some work to do in the finals.

“We knew that Pierce had some solid individuals and we told the kids afterwards that it’s not done,” Laux said. “They have some guys that will push us but we wrestled really well in that last dual.”

Pierce advanced to the finals by defeating Blair 36-35 and Gering 42-33 before falling to Hastings.

“This is a great thing for our program,” Pierce coach Tyler Legate said. “Our effort was great all day long but there were some times where we didn’t finish well and we need to do that.”

Now Hastings can turn its focus for the next two weeks for districts and state. Laux said while the state duals title is nice to have, the Tigers want more.

“This is awesome but we’re not done,” Laux said. “We have districts and state in the next two weeks. That individual tournament is the same as this, something we’ve been shooting for — a state title. This is great but we would like to have one more.”