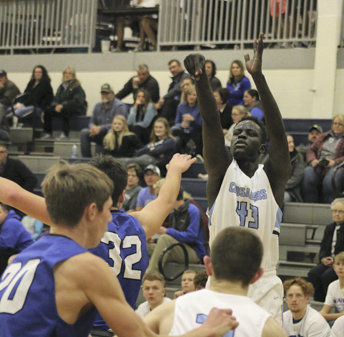 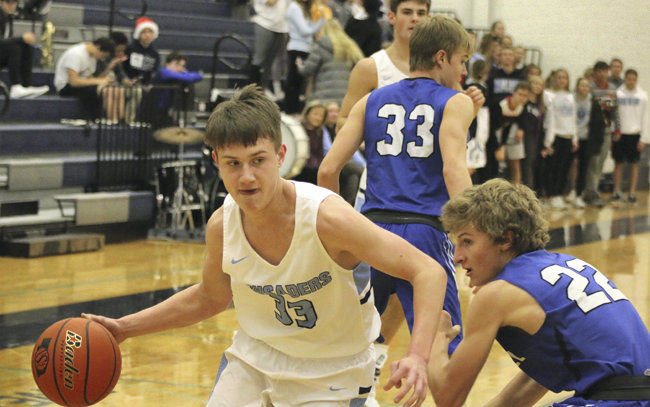 Grand Island Central Catholic relied on a suffocating defensive performance to improve to 5-0 on the season with a 61-17 home-court victory over Blue Hill Tuesday night.

The Class C-2 No. 3-rated (Omaha World-Herald) Crusaders limited the Bobcats to 11.1% (3 of 27) shooting from the floor in the contest. Blue Hill didn’t attempt its first field goal until the 4:28 mark of the first quarter — a 3-pointer that was blocked out of bounds — and didn’t score its first points until there was 2:38 left in the opening frame as GICC surged to an 18-2 lead.

“We’ve played well so far, defensively, and I thought tonight we were really zoned in on close-outs and different things like that,” Crusaders coach Tino Martinez said. “It’s just a credit to our kids who are willing to play that way, so we’re fortunate.

“We just didn’t know how good we could get, defensively. Our kids have really bought into that end of the floor and that has made us pretty good early, so we’re probably further along than I thought we might be at this point.”

GICC’s aggressive perimeter defense helped cause 23 turnovers, including 15 in the first half as the Crusaders led 33-10 at the intermission. And even when the Bobcats seemingly had scoring opportunities in the paint, Central Catholic’s 6-foot-9 Dei Jengmer swatted several of them away, finishing with four blocked shots.

“That’s that is something that we haven’t always had,” Martinez said of Jengmer’s presence inside. “He’s a shot blocker in there and he changes a lot of shots — even when he doesn’t block them — so as a perimeter defender, that’s probably a good feeling to have that.

“If you happen to get beat or we have someone slip in on an open spot, it’s nice to have Dei back there to help.”

Blue Hill (2-3) was held without a basket and had just two free throws in the final 9:50 of the contest. A pair of foul shots by Connor Henke with 6:51 to play gave the Crusaders a 57-17 lead and triggered a running clock the rest of the way.

Central Catholic shot 50% (22 of 44) from the floor, including going 10 of 18 from 3-point range. The Crusaders were also 7 of 7 at the free-throw line and committed just seven turnovers.

“I thought going into the season that balance would be a strength of ours and we’ve had a different leading scorer almost every night,” Martinez said. “I think it makes us hard to guard and our kids do a good job of sharing the ball, so it’s been fun to watch. Hopefully, we’ll continue down that same path.”