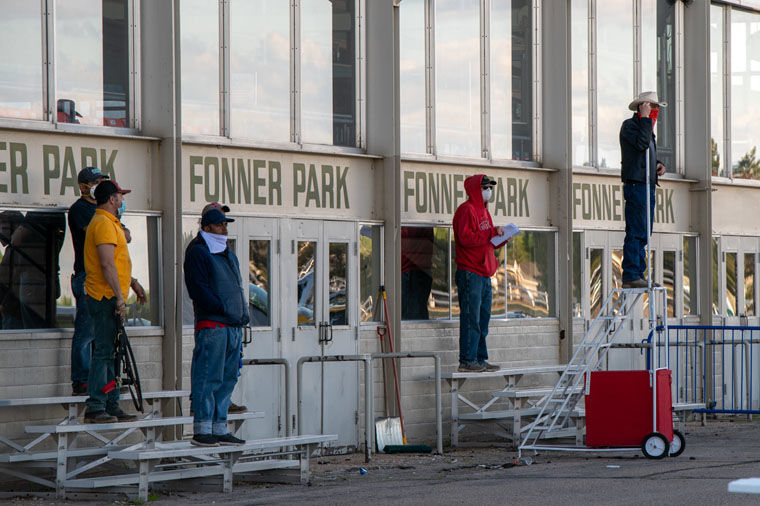 Masked horsemen watch a race last week at Fonner Park. Workers and horsemen have taken to wearing masks at Fonner because of the COVID-19 pandemic. (For the Independent/Ellis Collins). 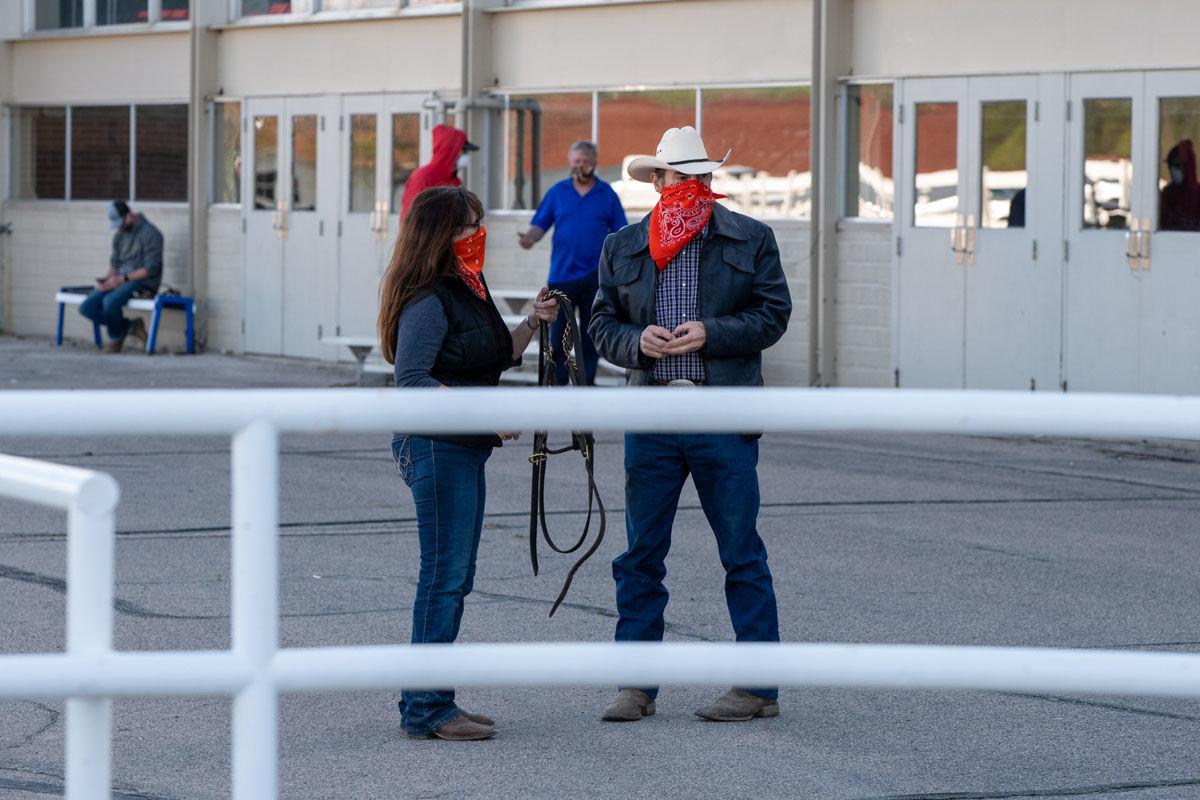 Two more masked horsemen wait to watch a race at Fonner Park. (For The Independent/Ellis Collins.

Masked horsemen watch a race last week at Fonner Park. Workers and horsemen have taken to wearing masks at Fonner because of the COVID-19 pandemic. (For the Independent/Ellis Collins).

Two more masked horsemen wait to watch a race at Fonner Park. (For The Independent/Ellis Collins.

Fonner Park, and those who work there, are taking this COVID-19 pandemic seriously.

Almost from the first when Fonner went to no spectator racing on March 23, all staff and horsemen have been wearing a mask of some sort. Some have regular masks, while others are wearing bandannas supplied by Fonner Park.

“We had to do that,” Fonner CEO Chris Kotulak said. “It’s part of our COVID-19 protocol and precautions. That was something I asked of the horsemen and my staff. I didn’t ever ask our guests to wear them, but they started. I noticed three or four weeks ago they started that up in Fonner Keno.”

Kotulak did his part to make sure everyone had something to wear.

Early on, he made some trips to Joanne’s Fabrics where he spent a couple of hundred bucks on fabric.

He brought the fabric to the main office at Fonner where staff cut it up into bandannas.

“I tried to get masks early on and I couldn’t get any,” Kotulak said. “So that was the next best thing was the masks or the bandannas.”

The effort has paid off. Fonner has now run seven weeks — or 21 days — of Monday through Wednesday racing with no fans. It has gone well enough because of the large mutuel handles the racing has produced to add 12 days of racing in May after originally planning to end the meet on April 29.

Now there are nine days of racing left on the schedule, and it’s looking like they just might make it to the end.

The horsemen understood how important it was for them to fight the pandemic the best they could.

“We asked people to bring their own if they wanted,” Kotulak said. “Those that didn’t have any, we would provide some. Even this week my staff in the paddock will say, ‘Hey, we’re out of bandannas,’ and I’ll bring them down some.”

Most understood the situation. As with anything, there were a few that were a little slow to catch on.

Now there are signs on the door of the racing office saying that you must have a mask on to enter the office.

“We were limiting the racing office to 10 people at a time,” Kotulak said. “But there were some people who were a little slow to appreciate the importance of all the protocols so finally we just stipulated you had to have a mask or bandanna to get into the racing office.

“The horsemen have been really good about wearing them. And then the racing office staff wear them also.”

Now as the racing season winds down, the focus is on making it the rest of the way. The final day of racing is scheduled for May 27.

But as Kotulak has said throughout the pandemic, racing at Fonner is still on a day-by-day basis.

“We’re still treating this as a very important matter,” Kotulak said. “We realize that our livelihood and continuation of what we’re doing with no spectator racing depends on fighting the pandemic as best as we possibly can.”

The mutuel handle remained strong in the first week of extra racing at Fonner Park, but they weren’t quite as robust as they had been.

That was down considerably from the Wednesday before that when it was $6,457,098, but that was the day of the Al Swihart Memorial Stakes, the Bosselman and the Coors Starter Allowance.

With nine days of racing remaining on the schedule, Armando Martinez leads the jockey standings with 54 wins. Jake Olesiak is second with 47.

Isai Gonzalez has opened a little lead in the trainers standings with 33 wins. Kelli Martinez is second with 29 and David Anderson has 21.

Adriel Gonzalez has a comfortable lead in the owner standings with 19 wins. Martinez Racing has 13 while Ramsye Mitchell and Mark Hibdon have 12 each.

Bob Hamar is sports editor for The Independent.