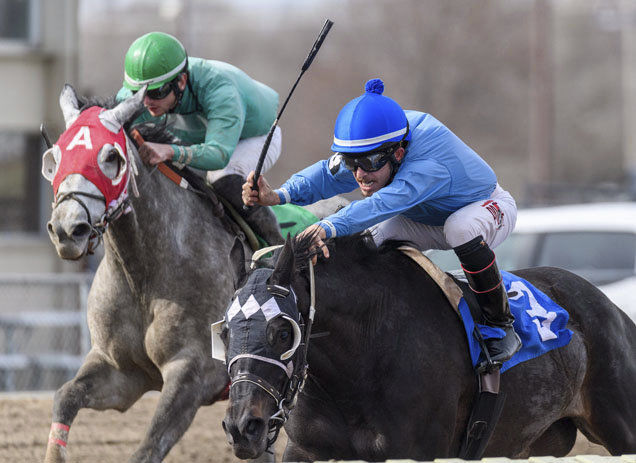 Personal Cat (front), ridden by Dakota Wood, and Dorothe Marie (back), ridden by Nathan Haar, come down the stretch of race 2 Wednesday at Fonner Park in Grand Island. 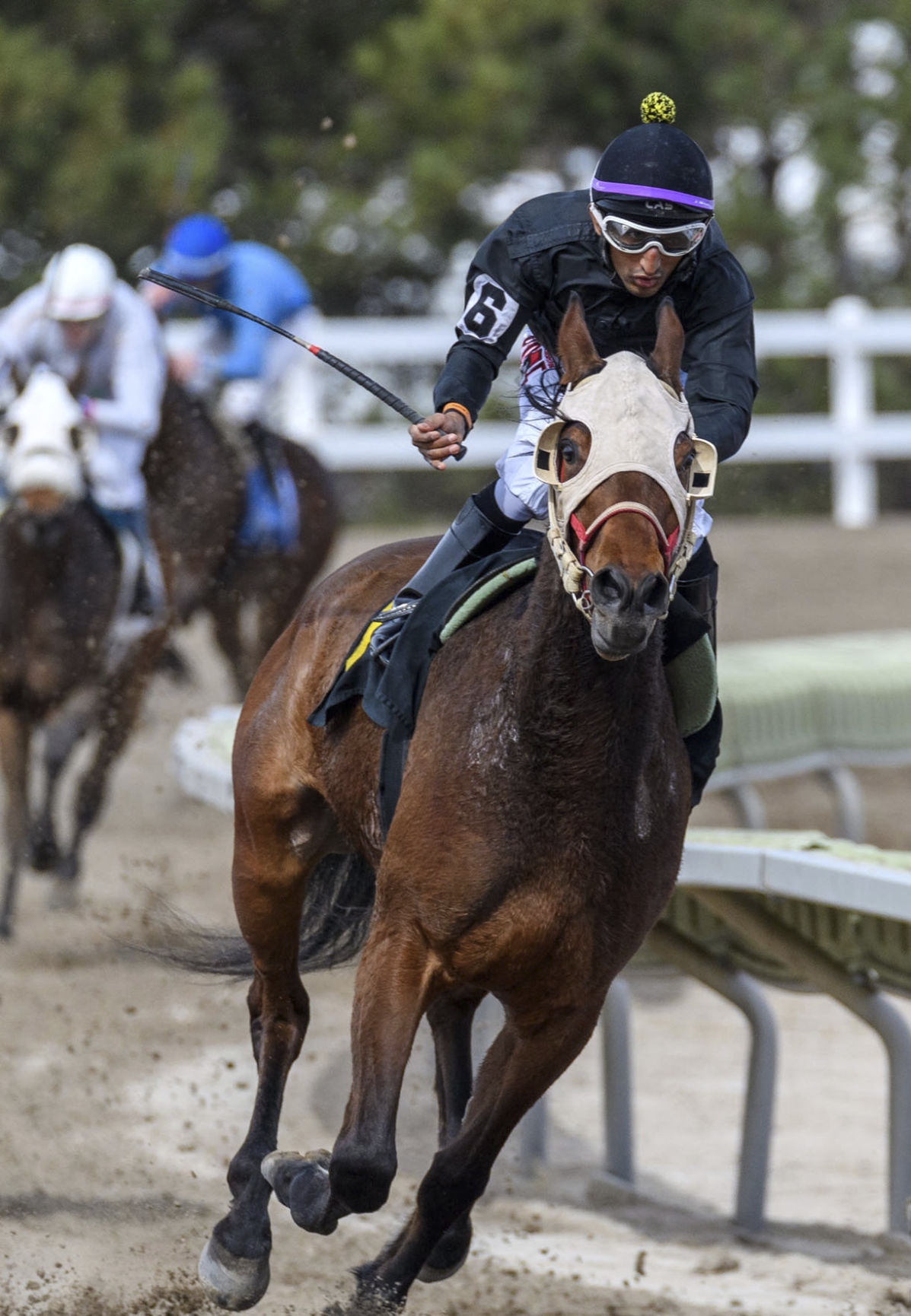 Auctioneer (6), ridden by Luis Ramon Rodriquez, leads the pack coming into the home stretch of race 1 Wednesday at Fonner Park in Grand Island.

Personal Cat (front), ridden by Dakota Wood, and Dorothe Marie (back), ridden by Nathan Haar, come down the stretch of race 2 Wednesday at Fonner Park in Grand Island.

Auctioneer (6), ridden by Luis Ramon Rodriquez, leads the pack coming into the home stretch of race 1 Wednesday at Fonner Park in Grand Island.

“The bad news was they only bet $2.7 million instead of $2.8 million (on Tuesday),” Kotulak said. “The good news is we got a call from some guy in Ohio who wants to buy a Fonner Park T-shirt.

“It’s nice that we can be good natured about these sort of numbers in what is a dire situation otherwise,”

Fonner began the two-week experiment of Monday through Wednesday racing on March 23. Fonner and the horsemen agreed on two weeks of racing to see if it was feasible to continue.

That in turn made it financially feasible for racing to continue at Fonner for the rest of April.

“It exceeded our expectations because we did not expect as many other tracks to cancel racing,” Kotulak said of the trial period. “So the limelight that we believed we were moving into just got a lot brighter than we expected.”

The early pick five proved to be a good addition to the Fonner Park card this week. In three days, that produced just over $400,000 in handle.

Fonner also moved to a 4 p.m. first-race post time this week. That also helped separate Fonner from Will Rogers Downs, which was the only other track running late in the afternoon on Wednesday.

“It was certainly helpful because it gave us greater separation from Will Rogers Downs,” Kotulak said. “It got the first leg of Dinsdale Pick Five Jackpot so we weren’t sharing the signal with any other race track at that time and I think that’s huge.”

Fonner Park has also gotten some national exposure that it wouldn’t have gotten in a normal year.

“I think the exposure helps because people see we have a nice, tidy, bettable product,” Kotulak said. “But next year when this is all behind, we’ll still be little, tiny Fonner Park. People can still bet on us through the TVG website, but we certainly don’t expect to be shown on TVG on any kind of a routine basis.”

Now the plan is to run Monday through Wednesday until the end of April, or as long as the coronavirus pandemic allows. Kotulak said they plan to run all the stake races scheduled. That includes the Pump & Pantry-Bosselman/Gus Fonner Stakes.

“We are in the plans of finalizing Bosselman/Gus Fonner meaning by this time next week we’ll know exactly what the purse is going to be and what the date will be,” Kotulak said. “That way we can get it out there to the horsemen who have been asking about it, but we haven’t been able to give them a solid answer.”

Kotulak said the final day of racing is planned for Wednesday, April 29. The Bosselman may also be on that date.

“That could potentially be the day of the Bosselman/Gus Fonner,” he said. “We want to go out with a big finish.”

Mr. Tickle swept to a win in the Fonner feature with a strong finish to win the one-mile allowance race with a purse of $9,200.

Mr. Tickle, an 8-year-old son of Street Sense and Rasindy who was bred in Kentucky, rallied to catch Blue Harbor in the final strides to win by a length. He covered the mile distance in 1:41.2.

Blue Harbor, with Dakota Wood aboard, led down the backstretch with Bryan McNeil on Mr. Tickle laying back in fourth or fifth. Blue Harbor still led by a length and a half heading into the stretch, but he was unable to hold off Mr. Tickle.

Mr. Tickle won for the eighth time in his last 10 races. That included five straight wins, four in a row at Remington Park and later another at Sam Houston Race Park.

% Jockey Armando Martinez won the second race on Irish Contessa for trainer Mark Hibdon, then took the third on Possibly in Love for his wife and trainer Kelli Martinez. Armando was unseated by Ollie’s Papa’s Boy at the start of race five and was excused from his mounts for the remainder of the card.

% Jockey Luis Rodriguez won the first and the last on Wednesday. He was victorious on Auctioneer for trainer Mike Sorensen in the opener, then rode long shot Trepi’s Trpl Crown to a surprise win in the nightcap for trainer Mark Lemburg. Trepi’s Tipl Crown paid $127 to win.

% Isai Gonzalez and Kelli Martinez are tied for the lead in the trainer’s standings with 19 wins each. David C. Anderson has 13.

Nominations are in for the $10,000 Baxter Stakes Tuesday at Fonner Park.