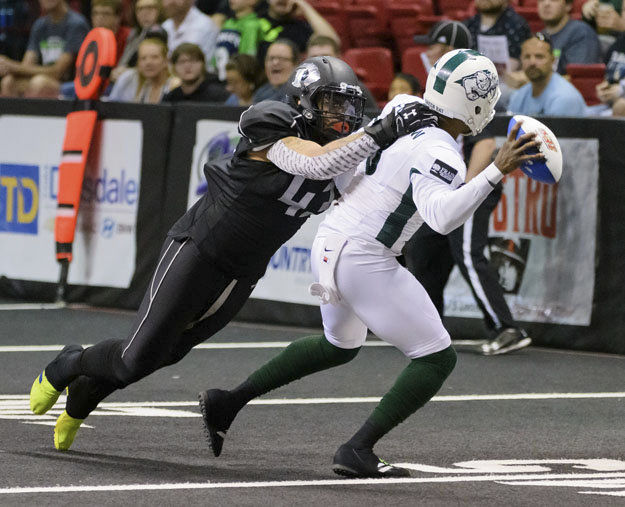 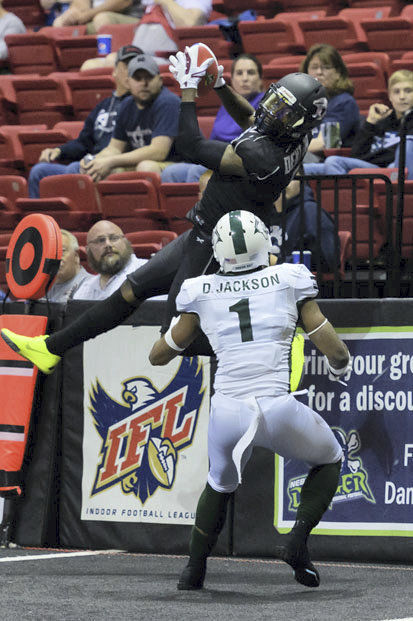 Green Bay had the ball deep in Nebraska Danger territory with just eight seconds left in the fourth quarter.

The Danger led by seven points, and defensive back Brandon Roe knew what Green Bay was going to do.

“I called it out,” Roe said. “I knew what they were running. Coach told me sit in the middle and wait on it. I did what he told me to do.”

The result as the clock ran out was Roe’s fourth interception of the season that clinched a 47-40 Danger victory Saturday at the Heartland Events Center.

Danger coach Pig Brown wasn’t surprised that Roe knew what was coming on that final play.

“He should,” Brown said. “I told him 10 times. All you have to do is do your job. When you do your job, you end up in good places. Thankful for him doing his job and making that big play.”

The win for the Danger (4-4) ended a run of frustrating losses to the Blizzard (5-3). Green Bay had beaten the Danger in eight of 13 games all time and had won the last four meetings between the two teams.

“They’re confident and those guys play hard,” Brown said. “We finally found a way to win the game. I’m proud of those guys, proud of the coaching staff. Now it’s on to Cedar Rapids.”

The Danger had taken the lead on a 30-yard pass from quarterback Tommy Armstrong to receiver Gregory Dent. It the third touchdown catch of the game for Dent, who had five catches for 60 yards.

“We wouldn’t expect anything less from him,” Brown said. “The kid is just a special kid. He works hard on the field and off the field. You do those things and good things come your way.”

Armstrong had another big game for the Danger. He was 13-for-16 passing for 163 yards and four TDs. He also led the rushing attack with 82 yards on 13 carries and two touchdowns.

The first half was a defensive battle with the Danger holding an 18-13 lead at the break.

Green Bay scored first in the second half on a pass that deflected off a Blizzard receiver into the arms of B.J. Hill for a 4-yard scoring pass and a 20-18 lead for Green Bay.

The Danger responded with a 1-yard TD pass from Armstrong to Dent for a 25-20 lead.

Green Bay came back with a 15-yard pass from quarterback Lenorris Footman to Taylor for a 27-25 lead with 2:46 left in the third.

On the next possession, Armstrong hit Quincy Walden with a 30-yard TD strike that Walden caught falling into the stands. Green Bay challenged the call, but it stood as called. That gave the Danger a 32-27 lead going into the final quarter.

A 2-yard TD run by Rameses Owens gave Green Bay a 33-32 lead after the extra point kick bounced off the left upright.

Dent then caught his second TD pass of the night, and his fifth in the past two weeks. This one was a 10-yarder from Armstrong for a 39-33 lead with 5:23 left on the clock.

With a minute left, Rameses Owens scored from 2-yards out to tie the game at 39. Green Bay kicker Edward Ruhnke drilled the extra point to give the Blizzard a 40-39 lead.

That set the stage for Dent’s third TD of the game and the final hectic minute.

Roe said his game-ending interception really was a team thing.

“I’ve got to give credit to my defense,” Roe said. “I couldn’t have done what I did without my D-line pressuring the quarterback. The linebackers were doing what they were supposed to do. Everybody did their job, and it worked out for us.”

The Danger missed 30 tackles in the loss to Green Bay a week ago. Brown said the effort was much better this week.

“We came out and gave a better effort than we gave last week,” Brown said. “Effort was the key word of the week. Our goal this week was to get 1% better and go 1-0, and I think we did a heck of a job tonight.”

Green Bay held a 13-6 lead until late in the second quarter. Armstrong scored on a 7-yard run to pull the Danger to within a point at 13-12 with 3:36 left in the half.

The defense held Green Bay to a long field goal attempt that sailed wide and the Danger got the ball back with 48 seconds left in the half.

A 12-yard run by Armstrong followed by a roughing the passer penalty on the Blizzard moved the ball to the Nebraska 3.

Armstrong went over from there with just 2 seconds left in the half for an 18-13 Danger lead at the break.

“It’s always good to win in front of your fans,” Brown said. “The community deserves it, the fans deserve it, this team deserves it.”