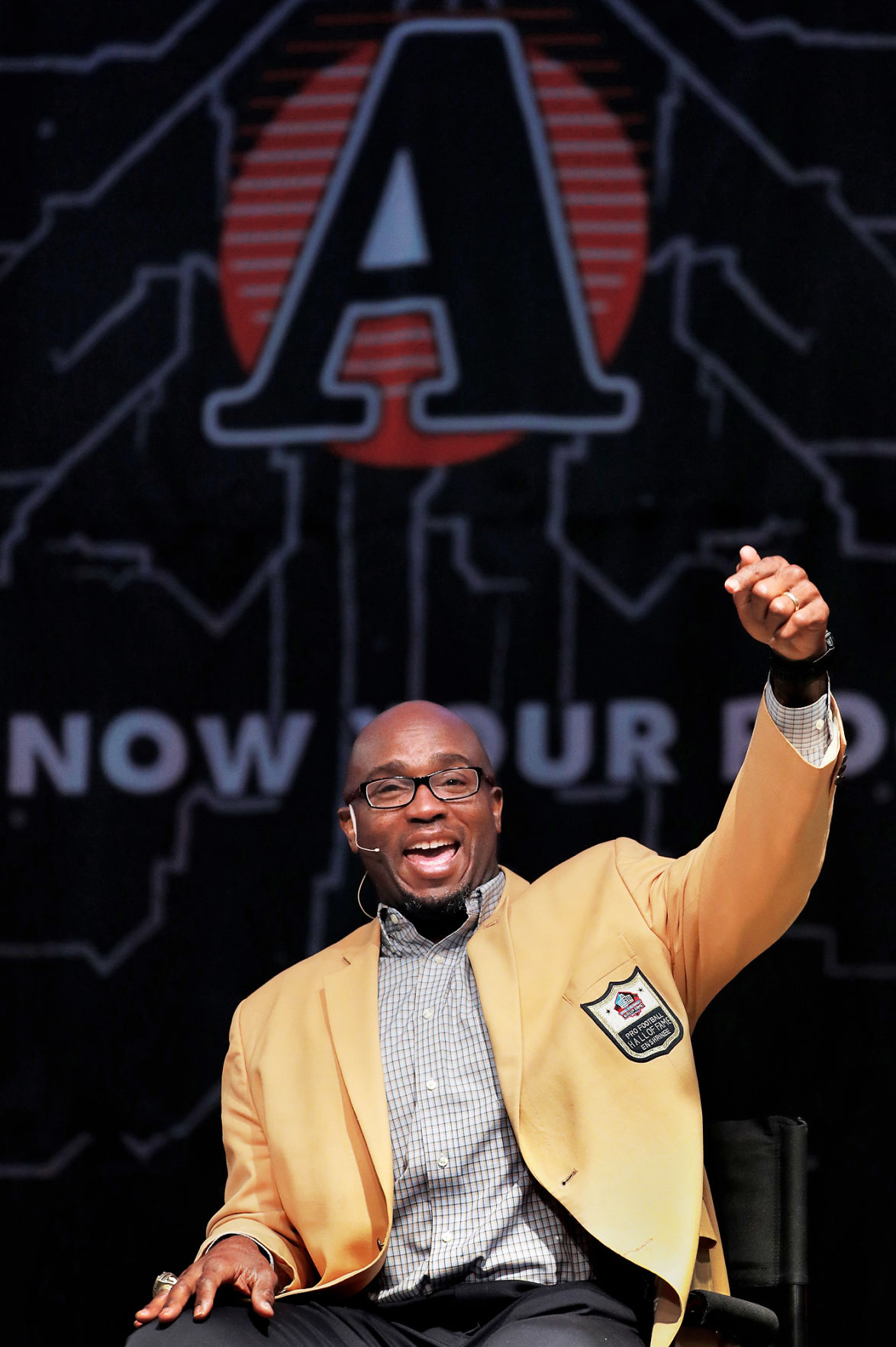 Former Husker and Kansas City Chief lineman Will Shields speaks Tuesday morning during the first day of Aurora Cooperative's ACE Summit and 2020 Annual Meeting in the Pinnacle Bank Expo Center at Fonner Park in Grand Island. Shields went to 12 straight Pro Bowls during his career, was inducted into the College Football Hall of Fame in 2011, and was inducted into both the Pro Football Hall of Fame and the Chiefs Hall of Fame in 2012. (Independent/Barrett Stinson) 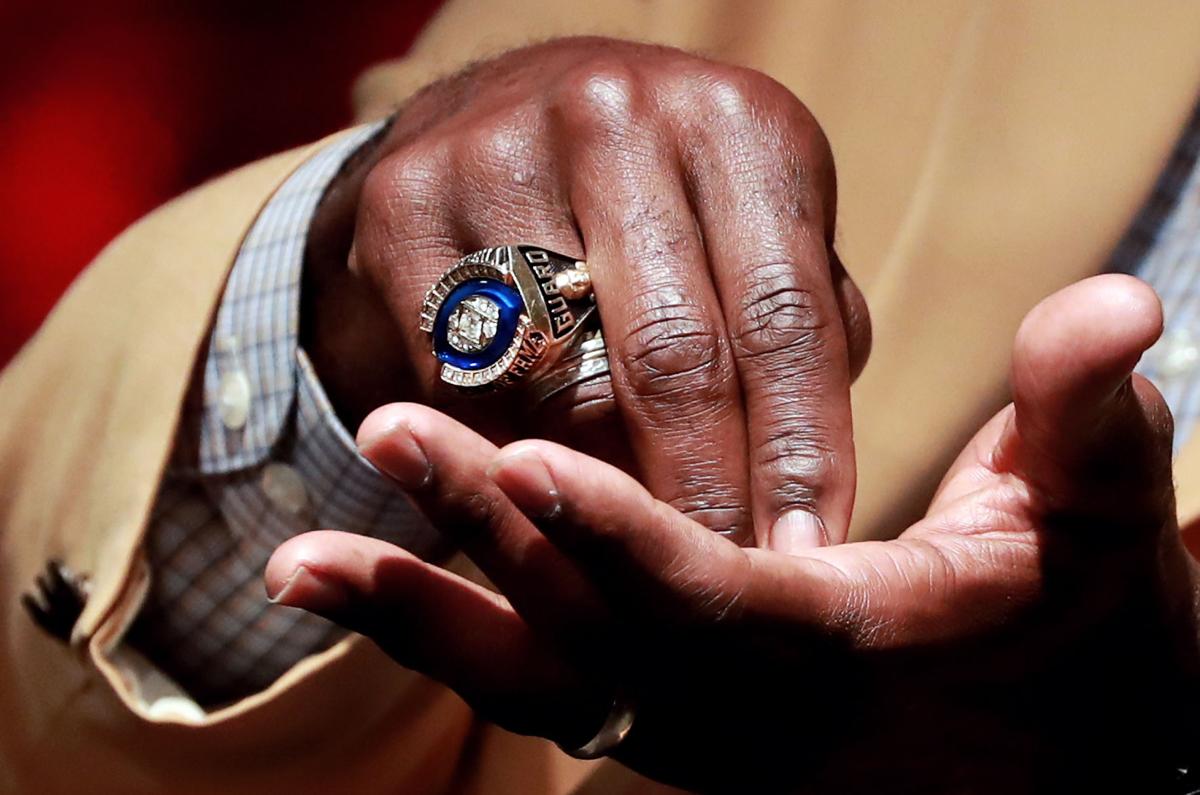 Former Husker and Kansas City Chief lineman Will Shields speaks Tuesday morning during the first day of Aurora Cooperative's ACE Summit and 2020 Annual Meeting in the Pinnacle Bank Expo Center at Fonner Park in Grand Island. Shields went to 12 straight Pro Bowls during his career, was inducted into the College Football Hall of Fame in 2011, and was inducted into both the Pro Football Hall of Fame and the Chiefs Hall of Fame in 2012. (Independent/Barrett Stinson)

From the time he first started playing the game, Shields was an offensive lineman.

“I was always a blocker, a guy that pushed people around, even when I was little,” Shields said. “So I’ve never been a guy that ever run around, catch a ball unless we’re playing pickup games. So I sort of knew my role at that point, it just sort of grew into it.”

But on Tuesday, Shields was subbing for a quarterback instead of protecting one. The Outland Trophy winner at Nebraska and Pro Football Hall of Fame member was in Grand Island to speak at the ACE Summit and 2020 annual meeting of the Aurora Cooperatives at the Pinnacle Bank Expo Center at Fonner Park.

Shields was a replacement for Hall of Fame quarterback Terry Bradshaw. The Pittsburgh Steeler great and two-time Super Bowl MVP had to cancel, so Shields was there to take over as a keynote speaker.

Shields told how as a kid in Lawton, Oklahoma, he was confident in his abilities.

“I was one of those kids that had an ego problem,” Shields said. “I would be watching pro football — and I’d watch good with my mom who was a Dallas Cowboy fan, that’s where my roots are — and I’d be like, ‘Oh yeah, that guy’s good, but I could block him.’ I mean, I was like six years old talking about how I could block that guy.”

When Shields got up into high school at Lawton High, he was still blocking defenders. When it came time to pick a college, he ended up going to Nebraska and playing for head coach Tom Osborne.

Shields remembers his introduction to Nebraska when he came to Lincoln for a camp.

“There were 14 of us, and at that point I think six of us got offers that week that we were here at camp,” he said. “It is one of those things that was really cool and unique within itself to be able to say at that point somebody was looking at you at the next level, to give you an opportunity to basically change your life.”

“He would basically say, ‘Hey, look at my rings, you can have one of these,”’ Shields said. “And then when I went to Oklahoma State, he (the Oklahoma State coach) was like, ‘We’re really close to home and we have a good team that’s solid.’ Tulsa was more or less the same. It’s a smaller university so you can stay here and still be close to home and we’ll give you that gentle touch of helping you get to where you want to go.”

At that time, Arkansas had a great basketball program. They had a fancy new facility they called a “Hyper Dome,” with numerous basketball courts.

“The other ones they said, ‘Hey, just stay as big as you want to be and just play offense,’ and so you know I opted for actually eating more McDonald’s, getting bigger and playing more offense. It was the easier path.”

He played at Nebraska from 1989 to 1992. He was a consensus first-team All-American his senior year and won the Outland Trophy as the nation’s top lineman.

But that didn’t help when the NFL Draft came along. He was the 74th pick in the 1993 draft behind 11 other offensive linemen.

That spurred Shields on in his professional career.

“I was angry. I was mad,” he said. “You know, I was a guy that won the Outland Trophy that was considered the best offensive lineman, the best interior lineman in (college), that kind of stuff.

“And your dream is to be a first-round draft pick. That’s what everybody wants to be. And I knew I was a third round- draft pick, I was slotted as a third-round draft pick, but in your mind, you’re still telling yourself you might sneak in the first round somewhere because of what you’re doing and what you’ve done.”

Shields kept tabs. He knew 31 teams passed on him twice before the Chiefs took him. He used that as motivation during his Hall of Fame career that spanned 14 seasons, all with the Chiefs.

But Shields always enjoyed playing football, whether it was in high school, college or the NFL. He was an iron man in the NFL. After not starting the first game of his career, Shields started 231 in a row over the next 14 seasons with the Chiefs. That’s the second longest streak ever behind Green Bay quarterback Brett Favre.

Shields — who now owns a fitness club in Overland Park, Kansas — was named the Walter Payton Man of the Year in 2003 for his work with the “Will to Succeed Foundation.”

Shields was elected to the Pro Football Hall of Fame in 2012.

After Shields was done speaking Tuesday, he took time for some questions from the audience.

— Did you win any championships in college”

“I did not win any college championships, but I beat up on the guys that won in 95-97.”

— What is his son Shavon, who played basketball at Nebraska, doing now?

“Shavon is playing in Spain. He’s in the last year of his contract for Spain. And he’s doing really well this year. They’ve had four coaching changes, but they have a new coach who likes him. I’m just telling you this basketball is a whole different animal because they do have a European league, and the European League has all different nuances and stuff compared to what they have here the NBA.”

“A Tesla is the fastest I’ve driven, and boy is it fun.”

— Did you ever get your hands on a ball, and did you know what to do with it?

“Once in high school I scored a touchdown, and I only scored a touchdown because the guys snapped the ball over the guy’s head and I beat them into the end zone and fell on it. I did run the ball at Nebraska once, and I chased it down because it was bouncing and got to like the 10. The other time, I did catch a pass that was batted down and I caught it. That’s when I think I got a concussion so it probably wasn’t the smartest thing.”

— If you could give Chiefs’ quarterback Patrick Mahomes some advice, what would you tell him?

— Who are you going to vote for?

“I don’t necessarily talk politics. I leave that for your own household. If my wife (Senia) is up here she would tell you who to vote for. But no,I don’t discuss politics, not even with her.”