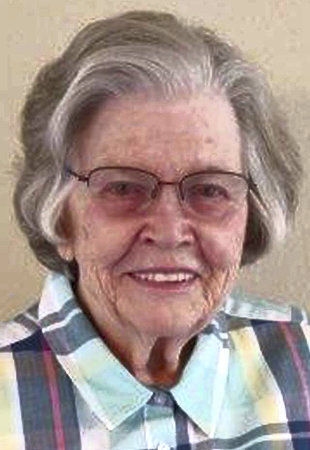 In consideration of the COVID-19 restrictions, a Celebration of Life will be schedule at a later date in Ord, with inurnment in the Ord City Cemetery. Ord Memorial Chapel is in charge of arrangements.

Bonnie was born May 18, 1928, at North Loup to Alvin and Grace (Kinney) Kron. The family lived in Greeley County until 1944, when they moved just south of North Loup. She attended District 30 county school and graduated from Scotia High School in 1947.

On June 1, 1947, Bonnie married Charles F. Wolf and they had three sons. Mr. Wolf passed away in March of 1958. She then married Charles “Charlie” Cox on July 30, 1961. Bonnie worked as a cashier for the Ord High School cafeteria for 25 years. In 2014, Bonnie and Charlie moved to Primrose Retirement Community in Grand Island.

Bonnie lived in Ord for 53 years and loved golfing, listening to accordion music and polka dancing. She enjoyed going for walks, pretty flowers and birthday coffees with her friends. Bonnie was active in the American Legion Auxiliary and a lifetime member of Veterans of Foreign Wars Auxiliary.

Bonnie is survived by her three sons and their spouses, Danny and Candy Wolf and David and Julie Wolf, all of Lincoln, and Douglas and Deb Wolf of Grand Island; eight grandchildren; 18 great-grandchildren; and a sister-in-law, Judith Kron of Anchorage, Alaska.

She was preceded in death by her parents; both of her husbands; and a brother, C. R. Kron. 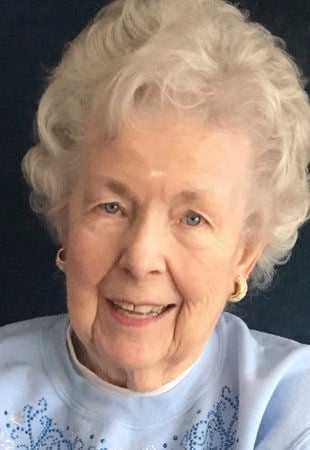 Following a private burial in the Grand Island Cemetery, her memorial service will be at First Presbyterian Church, with the Rev. Lisa Ewald officiating. The date of the service will be announced at a later time. Memorials are suggested to the Humane Society or First Presbyterian Church. Online condolences may be directed to www.apfelfuneralhome.com.

Pollyanne was born Sept. 10, 1927, to Jarrett and Mary (Coleman) Hare in Madison, Wis. She moved with her family to Lincoln and lived there for 10 years until the family moved to Grand Island. Pollyanne graduated from Grand Island Senior High in 1945 and graduated from the University of Nebraska in Lincoln in 1949.

On Feb. 2, 1953, Pollyanne was united in marriage to Robert W. Meyer at Grand Island and they celebrated 50 years together. The couple lived in Grand Island, where she worked as a kindergarten teacher within the Grand Island Public Schools system.

Among her many interests, she enjoyed gardening, needlepoint, cross stitch and genealogy. She played bridge and appreciated the many friends found within her bridge clubs. Her lifelong passion was her music and she was an accomplished pianist and soprano. She and her husband sang together in the choir of the First Presbyterian Church for many years. She was a member of First Presbyterian Church, the Retired Teachers Association, and Chapter CK PEO, where she served as president.

Survivors include three children and their spouses, Anne and Bill Quigley of Valentine, Robert A. Meyer of Omaha and Jim and Carol Meyer of Grand Island; five grandchildren, John Quigley, Bob Quigley, Casey Wiens, Jessica Wiens and Brett Wiens; and a brother and sister-in-law, Jarrett J. and Liz Hare of Lawrence, Kan.

Pollyanne was preceded in death by her husband, Robert, in 2003, and her parents. 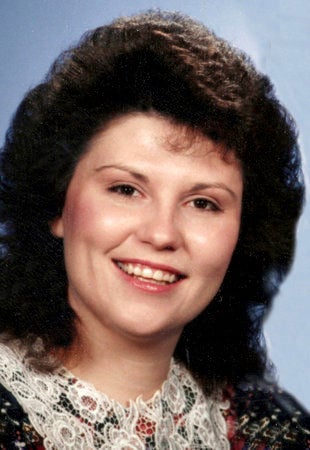 Out of an abundance of caution, there will not be a service for Shelly until the COVID-19 crisis has subsided. A gathering will be planned in the late spring/early summer with a notice to come celebrate Shelly’s life with her family. Shelly loved her family and friends and would not want their health jeopardized because they came to her celebration. All Faiths Funeral Home is entrusted with arrangements.

Shelly was born Sept. 7, 1961 at Holdrege, the daughter of Glenn and Joy (Viles) McInturf. She grew up on the family farm west of Stamford and attended school in Stamford, Oxford High School, and Central Community College-Grand Island.

On April 27, 1991, Shelly married Brian K. Rapp at Abundant Life Church in Grand Island. She was a wonderfully loving wife and homemaker and home schooled her sons. She had many animals throughout her life and they always loved her best. Shelly’s love for her Lord and Savior Jesus Christ carried her through the many health problems she fought for more than 25 years. Her faith in Jesus remained firm, no matter the pains and trials, and was a great inspiration to all who had the blessing of knowing her.

Shelly, your sweet smile and infectious laugh will live on in our hearts; your love for Christ will continue to inspire more than you know.

She was preceded in death by her parents and her father-in-law, Keith Rapp. 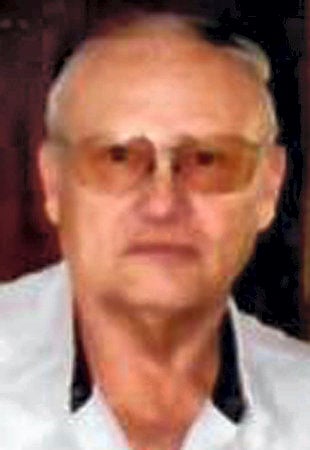 A celebration of life service will be planned at a later date. Hitchcock Funeral Home in Burwell is in charge of arrangements.

Ed was born east of Burwell to William and Katie (Setlik) Loeffler on Nov. 19, 1934, and in 1955, was united in marriage to his high school sweetheart, LuEllen Johns.

Ed worked several years for the Garfield County roads department while operating the family farm. He later started his own successful electronics business. Ed was an avid Amateur Radio operator, using the call numbers WØFIG and WØEJL. He served in a variety of capacities in the Central Nebraska Amateur Radio Club. He also served diligently on the Burwell High School Alumni Committee.

Ed is survived by his wife, LuEllen; his children, Mike Loeffler of Billings, Mont., Barb Loeffler and Betsy and Paul Lamb, all of Burwell, and Kathi and Elton Croy of Frederick, Md.; his sister, Carolyn Loeffler of Omaha; and brother-in-law, Tom Johns of Burwell. Also mourning his passing are his grandchildren: Jason and Tyler Loeffler of Billings, Mont.; Kacie and Donny Owens of Washingtonville, Ohio; Will Rykowski and Nikki and Justin Wurth of Missoula, Mont.; Ashley Rykowski of Burwell; Jen and Tony Pirrone of Shepherdstown, W.V.; Jessica and William Risk of Summerville, S.C.; and David and Daniel Croy of Frederick, Md. Ed also leaves three great-granddaughters, Tessa and Ava Loeffler and Harper Wurth.

Ed was preceded in death by his parents. 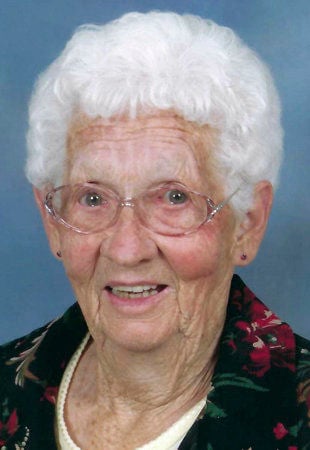 In consideration of the COVID-19 restrictions, a Memorial Mass will be planned at a later date. Private Interment will take place in the Ord Catholic Cemetery. The Rev. Scott Harter will be the Celebrant. Memorials are suggested to St. Mary’s Catholic School or donor’s choice. Ord Memorial Chapel is in charge of arrangements.

Margaret was born Feb. 9, 1925, to Harry and Hannah (Boyle) Conrad on the farm near Burwell. She graduated from Burwell High School and completed Normal Training to become a teacher. She continued her education through Kearney State College in later years.

A favorite memory was her family carpool, she was proud to be the trusted driver of a 29 Model A she owned. She dropped off her sister and her mother at their schools daily before going to her own school. She taught many years at rural schools in both Garfield and Valley counties and ended her career as an aid at St. Mary’s in Ord.

On June 5, 1950, Margaret was united in marriage to Ted Walahoski at the Sacred Heart Catholic Church in Burwell. They met at a dance at Jungman Dance Hall. The couple farmed west of Elyria and raised three children together. She was a dedicated farm wife, teacher, mother, grandmother and great-grandmother. She loved reading, watching her stories, babysitting her grandkids and was an avid fairgoer. She will be greatly missed recording the ribbon placings ringside at the Valley County Fair.

Margaret was a member of Our Lady of Perpetual Help Catholic Church, the Elyria Community Rosary Group, Altar Society and the American Legion Auxiliary. She enjoyed supporting the fairs and parades in both Ord and Burwell and was recognized for 93 years of attendance at the Burwell Rodeo in 2018.

She is survived by two sons and a daughter-in-law, Harry and Tena of Elyria and Jim of Ord; a daughter and son-in-law, Beverly and Chuck Smedra of Ord; five grandchildren and their spouses, Jared and Kris Walahoski of Overton, Jill and Ric Lingard of Lincoln, Joel Walahoski of Council Bluffs, Iowa, Josey and Steven Nelson of Wahoo and Seth Smedra of Ord; and 11 great-grandchildren.

She was preceded in death by her parents; her husband, Ted; and her siblings, Mary Petska, Jack Conrad and Joe Conrad. 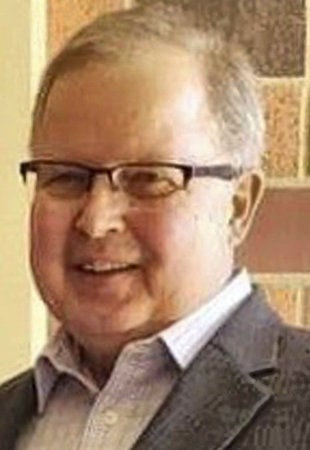 OMAHA — John Ray Wardyn, 67, of Omaha, died surrounded by loved ones Friday, March 20, 2020, at CHI Health Lakeside in Omaha due to complications from lung fibrosis.

Mass services will be at noon Thursday at St. Wenceslaus Catholic Church, with the Rev. Taylor Leffler presiding. Mass will be limited to immediate family: wife, children and grandchildren. However, family and friends are welcome to participate in the mass virtually via Facebook livestream invitation. Burial services will be at a later date in Grand Island.

John was born May 8, 1952, in Loup City to Ralph and Renee (Woitalewicz) Wardyn. John was surrounded by lots of love his entire life, being one of 15 children. He was most cherished by his five brothers and sister-in-law, Steven and Dawn Wardyn of Grand Island, Leonard and Marcia Wardyn of Farwell, Ron and Linda Wardyn of Loup City, Pete and Deb Wardyn of Cozad and Mike and Ann Wardyn of Grand Island; seven sisters and six brothers-in-law, Kathy and Dick Kohel of Lincoln, Marcia and Jim Leonard of Kearney, Mary Jo and Blount Swain of Scottsdale, Ariz., Linda Alexander of Columbus, Sharon and Doug Day of Loup City, Theresa and Kevin Jorgensen of St. Paul and Marge and Larry Kemling of Columbus;

John grew up on his family farm in Loup City, attended St Josaphat’s parochial school, and graduated from Loup City High School. Here he met his lifelong companion, Denise Marie Dethlefs, and on Sept. 5, 1970, she said “yes” and became his beautiful bride. From this day forward she was always by his side, experiencing life hand in hand.

The couple lived in Grand Island and Lexington, where they raised their three children. Once the younger boys were out of school they moved to Ephrata, Pa., to be near their daughter and grandson. Later they lived in London, England, then Wichita, Kan., and finally Omaha, to be near their youngest granddaughters.

John’s agriculture farming roots from his younger days stayed with him his whole life. He dedicated 46 years to New Holland Agriculture, retiring in 2017. In between work and grandpa duty, he would still eagerly look forward to helping his brothers with harvest.

John was a member of St. Charles Borromeo Catholic Church and an honorary life member of the Knights of Columbus.

John enjoyed helping family with farming, going to Husker football and basketball games, watching westerns, traveling (especially to the ocean), and going to grandchildren’s events. He always greeted everyone with a big warm smile and a heart filled with joy. No one ever left his presence without sharing a story or two and leaving with a fond farewell to return soon.

He was preceded in death by his parents; an infant sister, Janis Lynn Wardyn; and an infant brother, Lawrence Howard Wardyn.