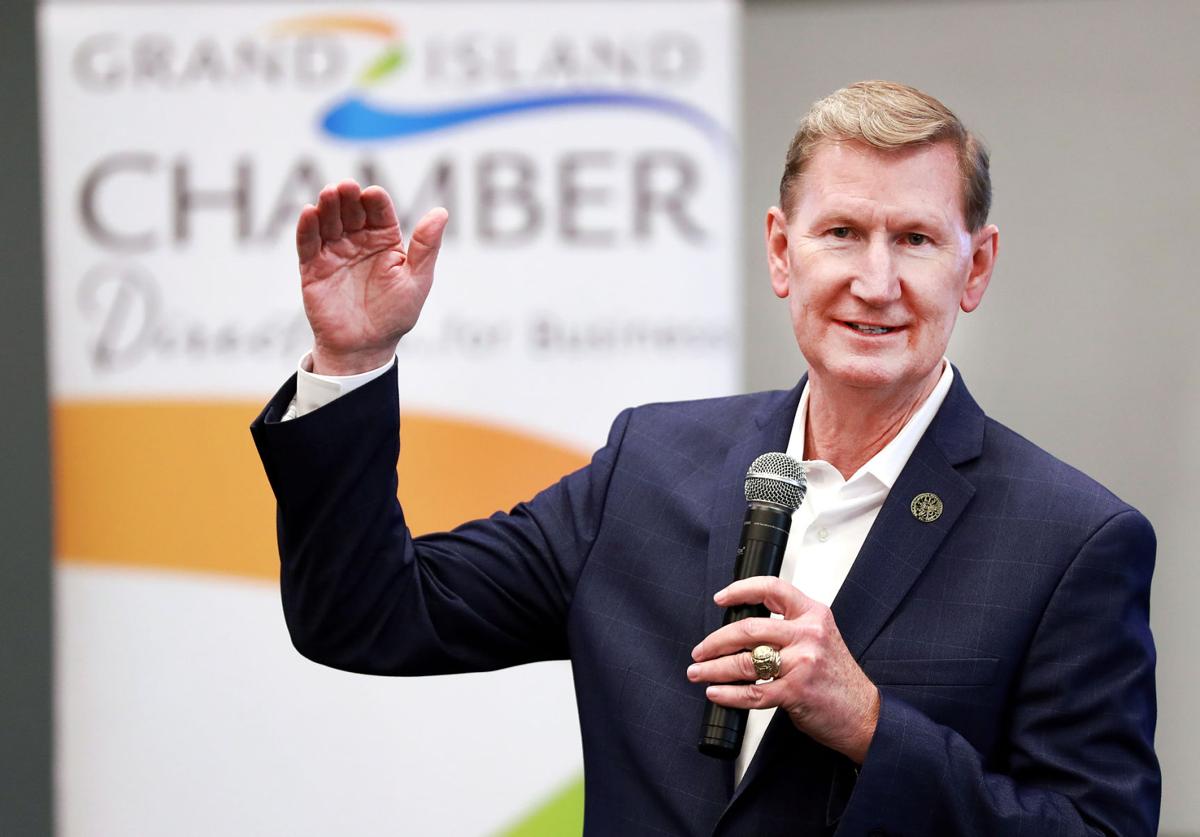 University of Nebraska presidential candidate Walter "Ted" Carter speaks about his life and his road to Nebraska on Monday afternoon at the Chief Industries-Westgate Road offices in Grand Island. Carter spent most of Monday traveling across the state speaking to Nebraskans. (Independent/Barrett Stinson) 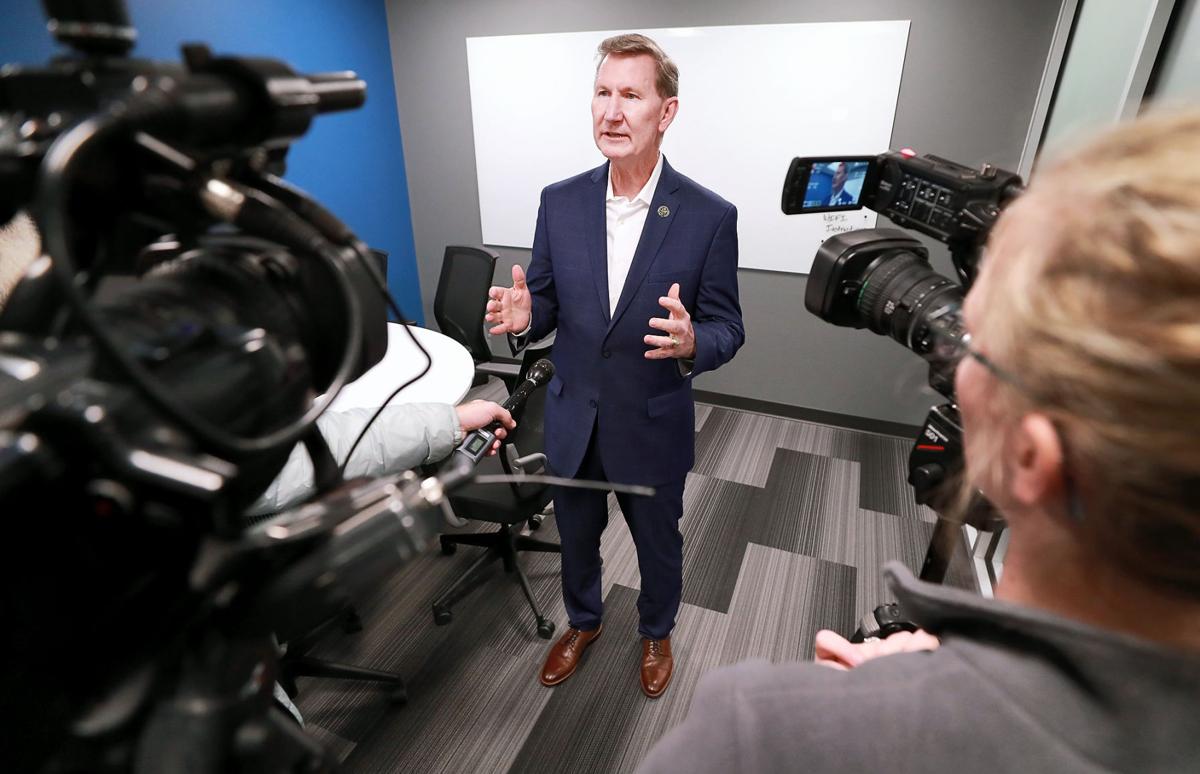 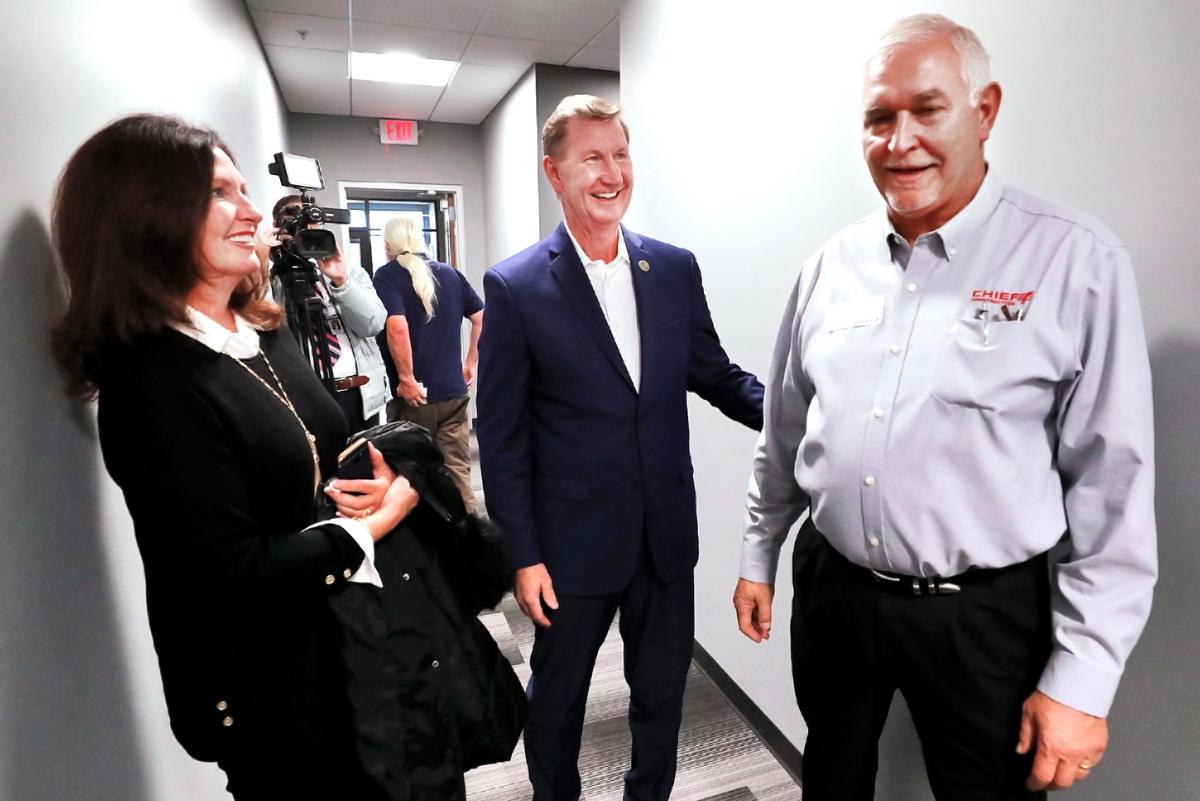 University of Nebraska presidential candidate Walter "Ted" Carter (center) and his wife, Lynda Carter, (left) are met by Mark Moravec of Chief Industries on Monday afternoon at the Chief Industries-Westgate Road offices in Grand Island. Carter spent most of Monday traveling across the state speaking to Nebraskans. (Independent/Barrett Stinson) 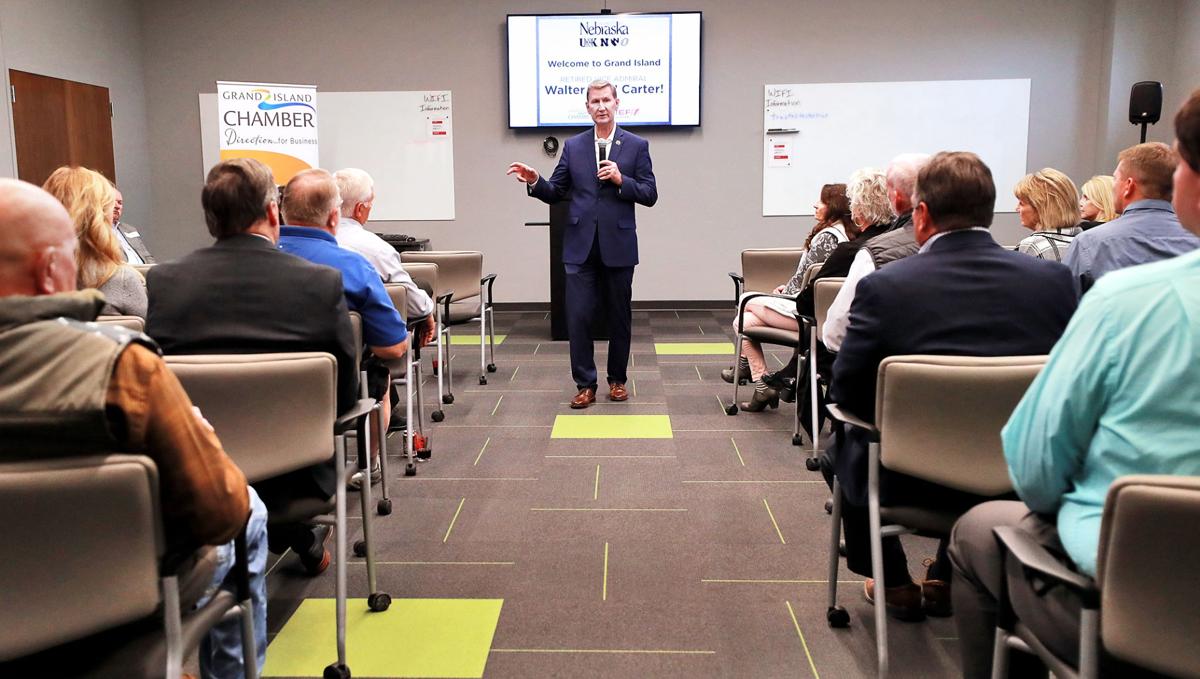 University of Nebraska presidential candidate Walter "Ted" Carter speaks about his life and his road to Nebraska on Monday afternoon at the Chief Industries-Westgate Road offices in Grand Island. Carter spent most of Monday traveling across the state speaking to Nebraskans. (Independent/Barrett Stinson)

University of Nebraska presidential candidate Walter "Ted" Carter (center) and his wife, Lynda Carter, (left) are met by Mark Moravec of Chief Industries on Monday afternoon at the Chief Industries-Westgate Road offices in Grand Island. Carter spent most of Monday traveling across the state speaking to Nebraskans. (Independent/Barrett Stinson)

About 50 people came together Monday at Chief Construction Company in Grand Island to hear from Walter “Ted” Carter Jr.

The University of Nebraska Board of Regents has identified him as a “high priority” candidate to serve as the president of the university system.

Carter, who retired earlier this year as a vice admiral in the United States Navy, has been touring Nebraska and getting to know the state and its citizens better. Carter’s appointment is subject to a 30-day public vetting period. His appointment could come later this month.

From being a fighter pilot to commanding aircraft carriers to serving as the head of the U.S. Naval Academy, Carter has had a distinguished naval career for nearly 40 years.

He was in Grand Island with his wife, Linda, to answer questions from community members about his goals and vision for the state’s university system.

Carter said he began his tour of Nebraska by visiting the state’s rural communities.

“We have just been overwhelmed with the welcome we have enjoyed so far,” he said.

Carter said he was interested in getting to know and understand better the role agriculture plays as an economic driver for the state and how it is interwoven into Nebraska’s social fabric.

Carter said agriculture is vital to the state’s university system as it was founded on the land grant university concept established in 1862.

“That’s part of the core of the university’s system that should not be lost,” he said. “The importance of agriculture, not only in the state, but what it does for the nation and the world is as important as it has ever been.”

While helping maintain the state’s agricultural strength, Carter also stressed the importance of training young people for technical jobs needed to be filled in Nebraska. He said those jobs require a high degree of technical and scientific expertise.

“Our young people not only value higher education, but they also want it turned into applications and jobs,” Carter said.

And to keep that talent developed by the state’s university system in Nebraska, he said it takes an essential partnership between the university and the state’s business community.

“That is part of the platform that I’m going to be working on,” Carter said.

He said while he has been a jet pilot with the Navy’s Top Gun school and has flown a lot of jets off of aircraft carriers during his Navy career, most of his time was devoted to being an educator.

“I have been in the education realm going back to my early 20s when I graduated from Top Gun,” Carter said. “That is more than just being the best of the best. It is really about being a life-long master in the art of teaching and learning.”

Carter said what he brings to the job of president of Nebraska’s university system is the experience of “leading some of the most complex leadership challenges that have been presented within the Department of Defense.”

Those leadership roles involved rebuilding an aircraft carrier, taking apart and rebuilding two nuclear reactors, to being in charge of dismantling an entire U.S. combative command that included more than 6,600 employees from a cold start in just eight months. He helped returned about $2 billion back to the U.S. taxpayers without the loss of a single job.

The investment of U.S. taxpayers dollars in research and development at the Defense Department has, over the years, helped the U.S. to have a technological edge in both the military and civilian sectors over other countries, along with improving the standard and quality of life of U.S. citizens.

He said it is “remarkably relevant” that the University of Nebraska system takes that same approach in research and development in helping to define the technological future of society.

“We don’t have to lose our land grant personality or lose our place in agricultural research and development,” Carter said. “The technology piece is important throughout.”

He said while at the U.S. Naval Academy, he helped develop the nation’s first cyber operations academic discipline that was fully accredited by ABET (Accreditation Board for Engineering and Technology) and created a nuclear engineering degree.

“We were very STEM-focused there, and I see STEM (science, technology, engineering and math) focus throughout all of the University of Nebraska’s campuses,” he said. “I think it is appropriate because it doesn’t matter, whether you are going to be a school teacher, a medical professional or go work the land and be an agricultural expert, you are going to have some STEM-based technology built into your job.”

Carter said that is where data science, data management, understanding machine learning or piloting remote equipment or artificial intelligence or what is coming with 5G technology, which is the fifth generation of cellular network technology, are important. He said “the internet of things will change our lives more dramatically than the actual introduction of the internet.”

“At the end of the day, as important as land grant university status is or research and development is to our multiple campuses, the most important thing is the student body,” Carter said. “Treating our young men and women to be inspired to go into education and to be treated as a customer and not a product. That is the future of education.”

He said he is disturbed by a recent poll that reported only one-third of Nebraskans believed that higher education was essential. That is down from 54 percent five years ago.

“That is a remarkable shift,” Carter said. “We owe Nebraskans some real understanding of the value of education. Part of that will not only make up for that vacuum of about 15,000 STEM trained and educated young people, but also to show that this education will be a value to the state of Nebraska.”