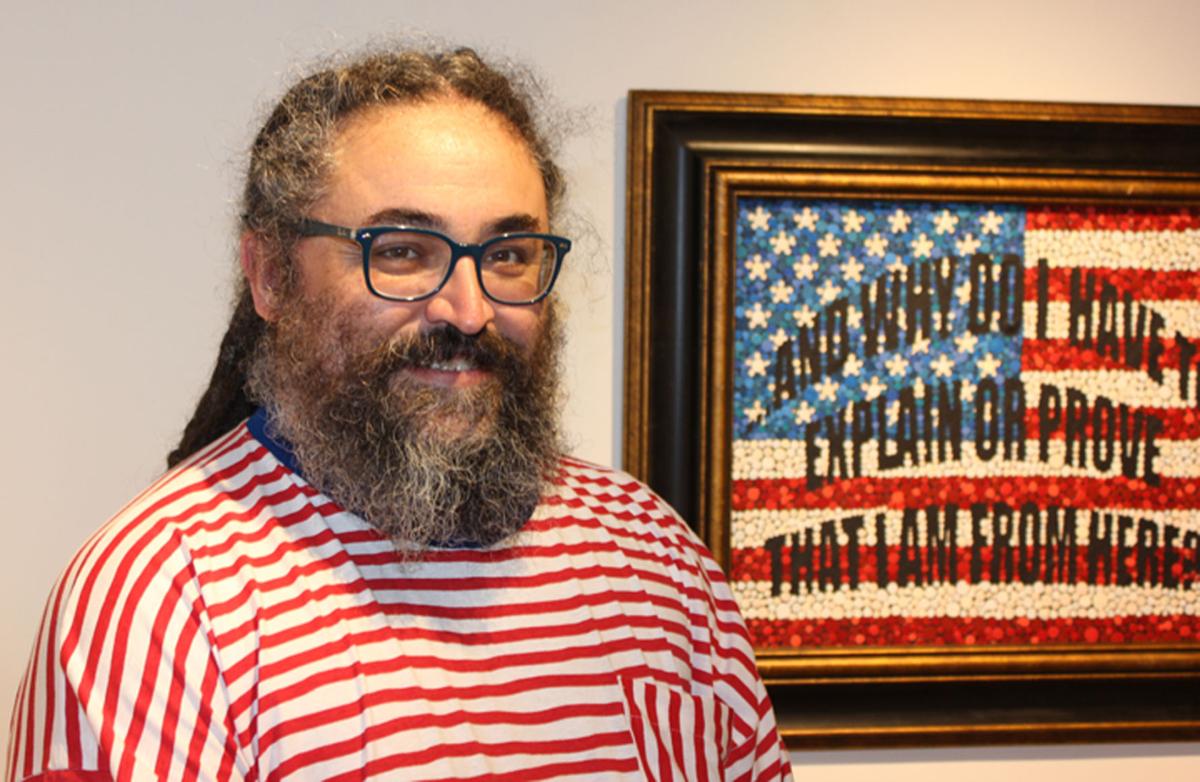 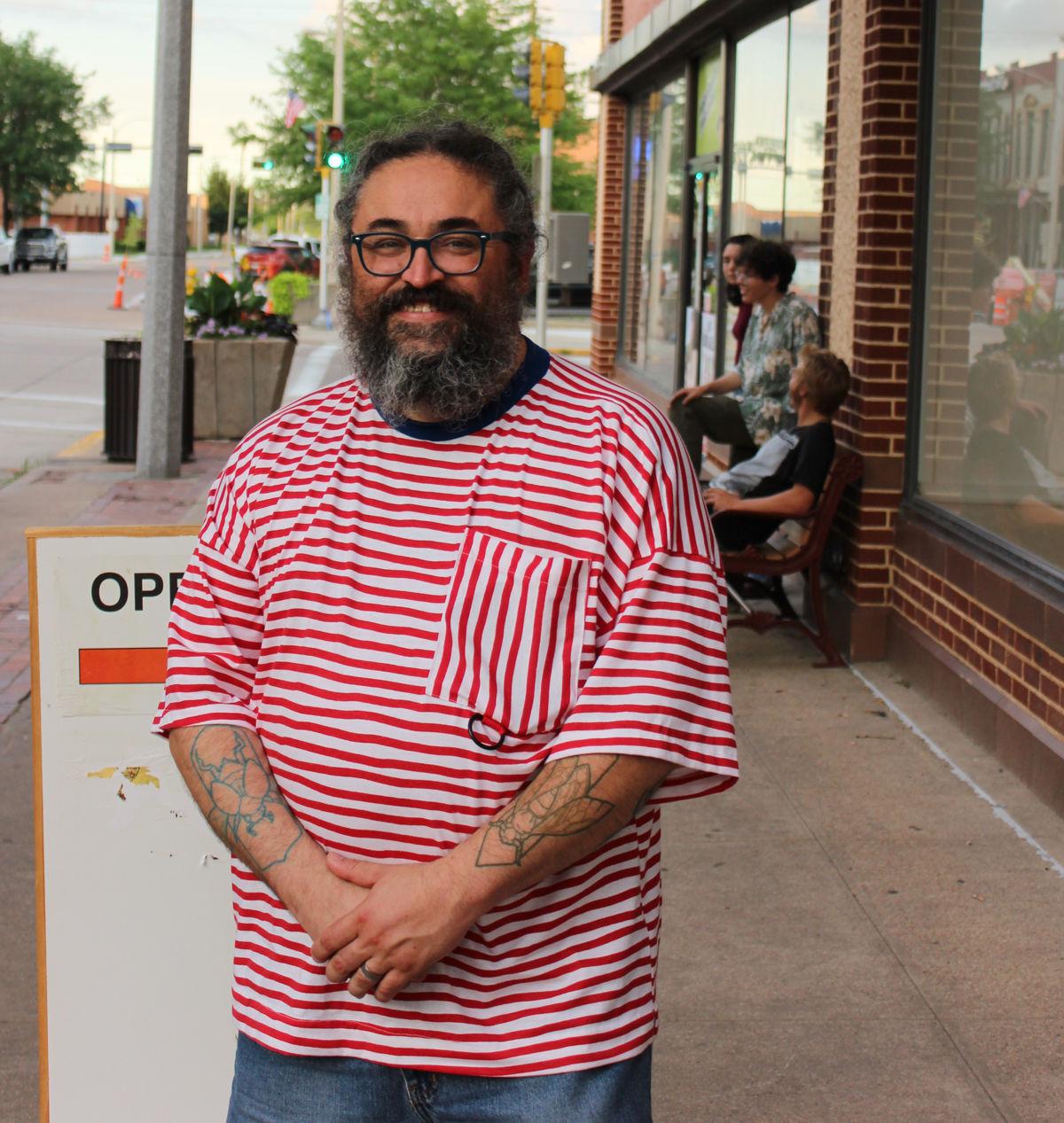 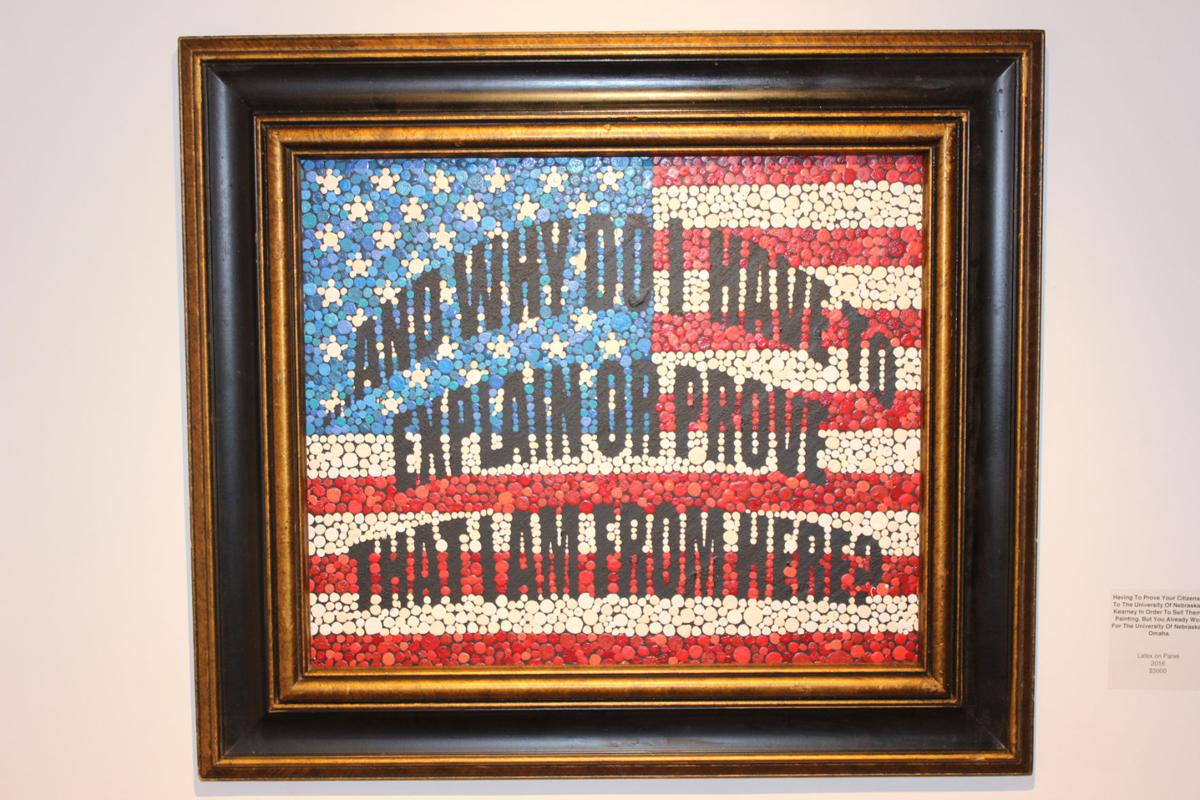 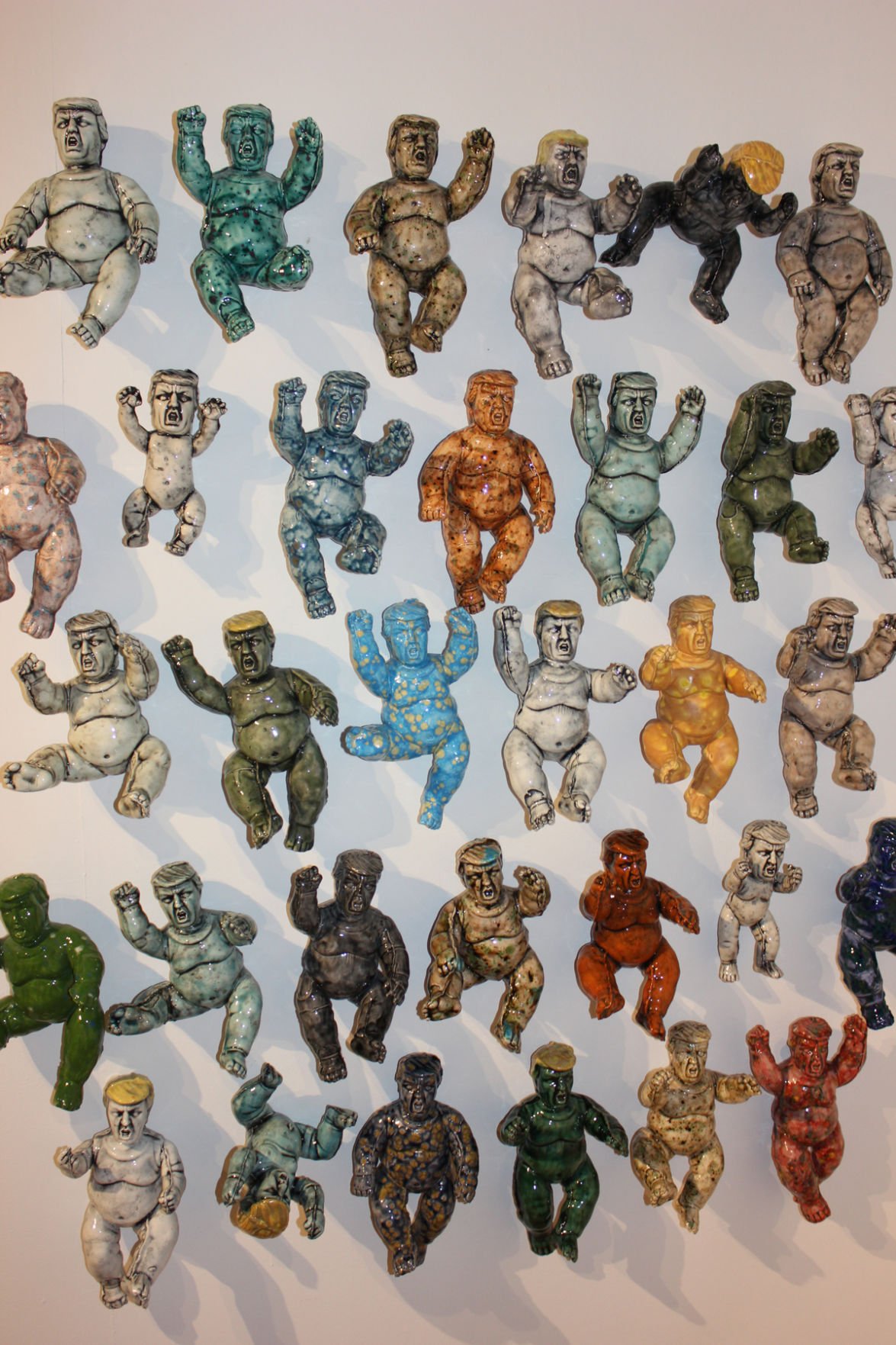 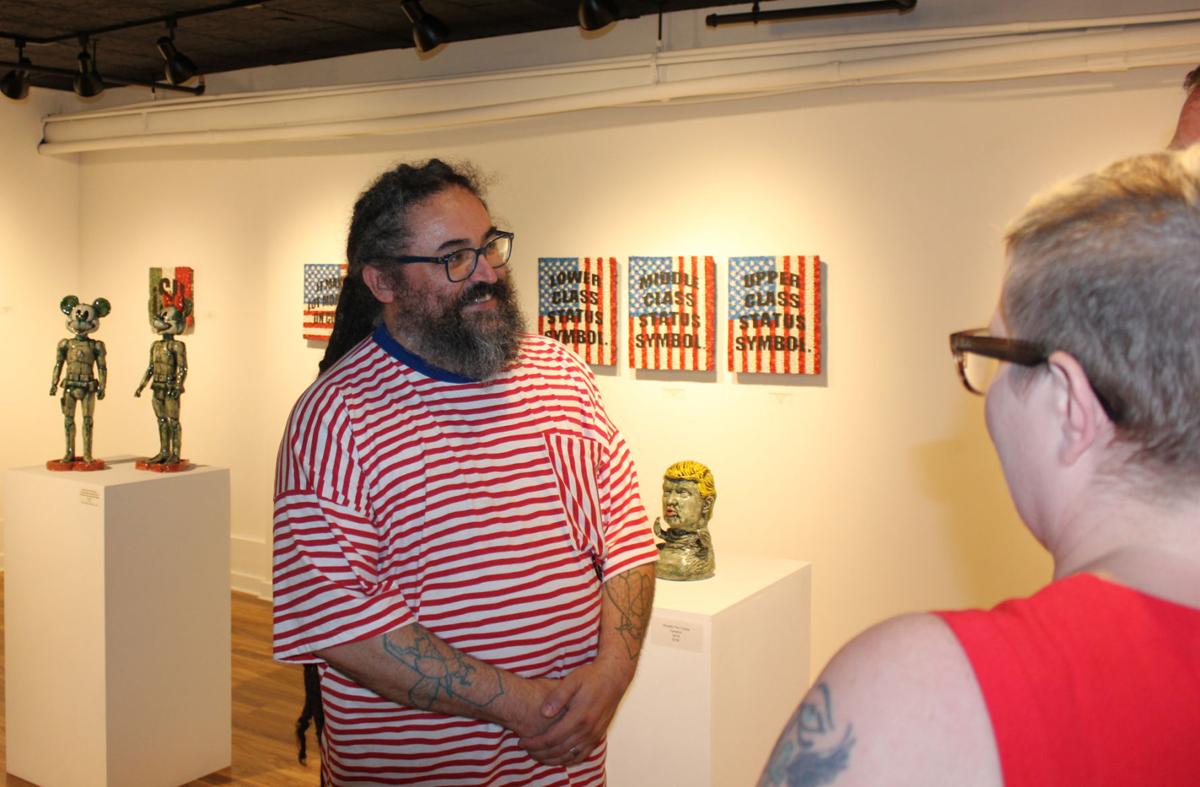 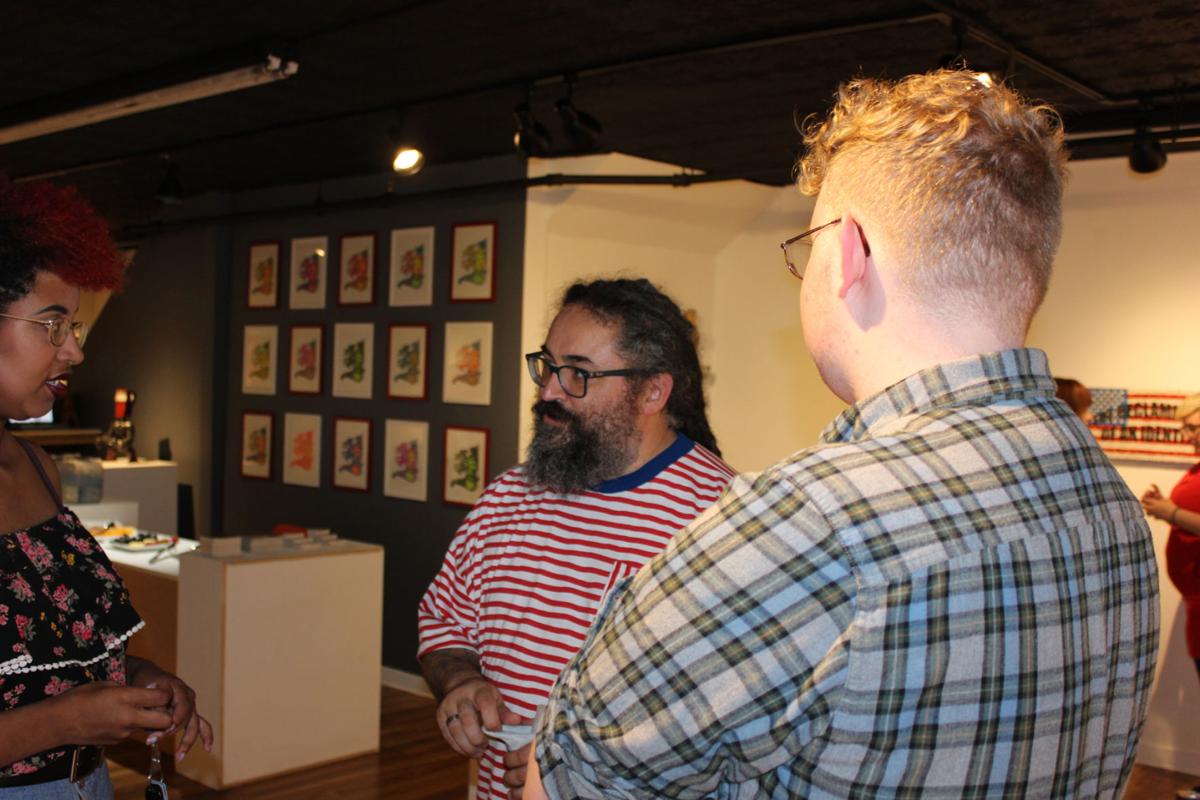 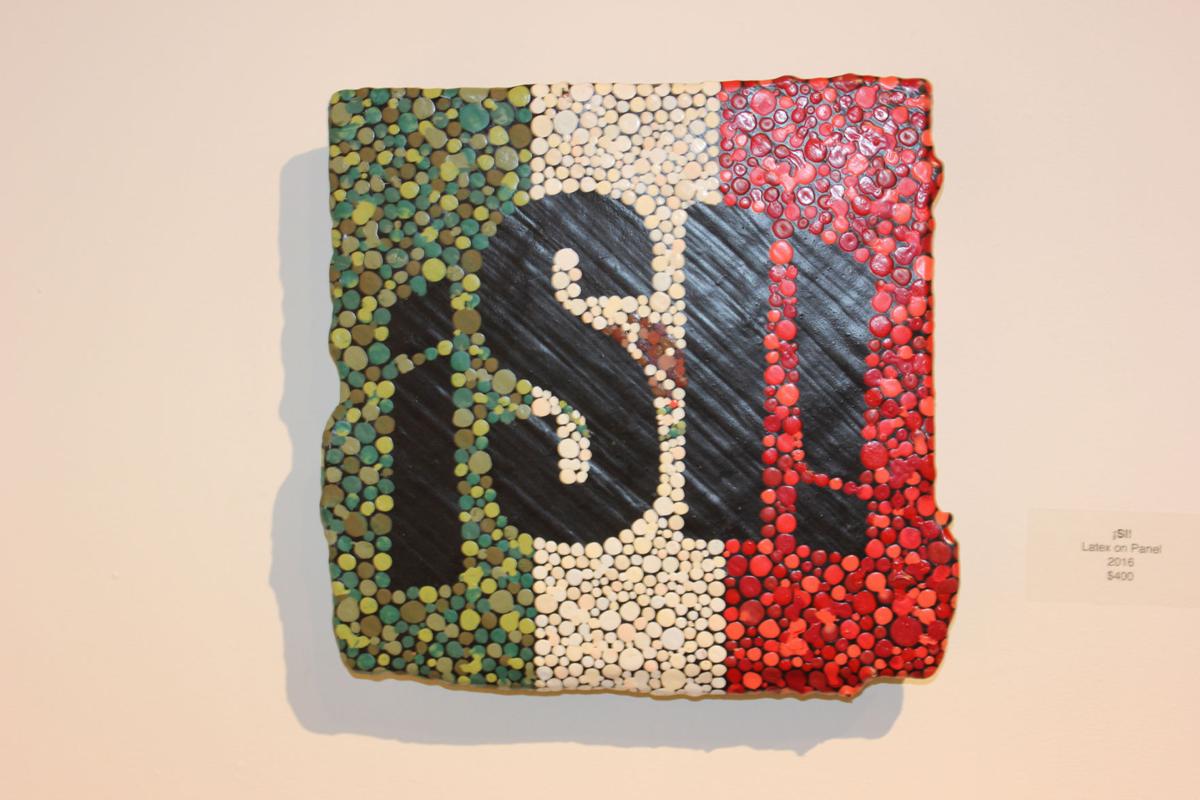 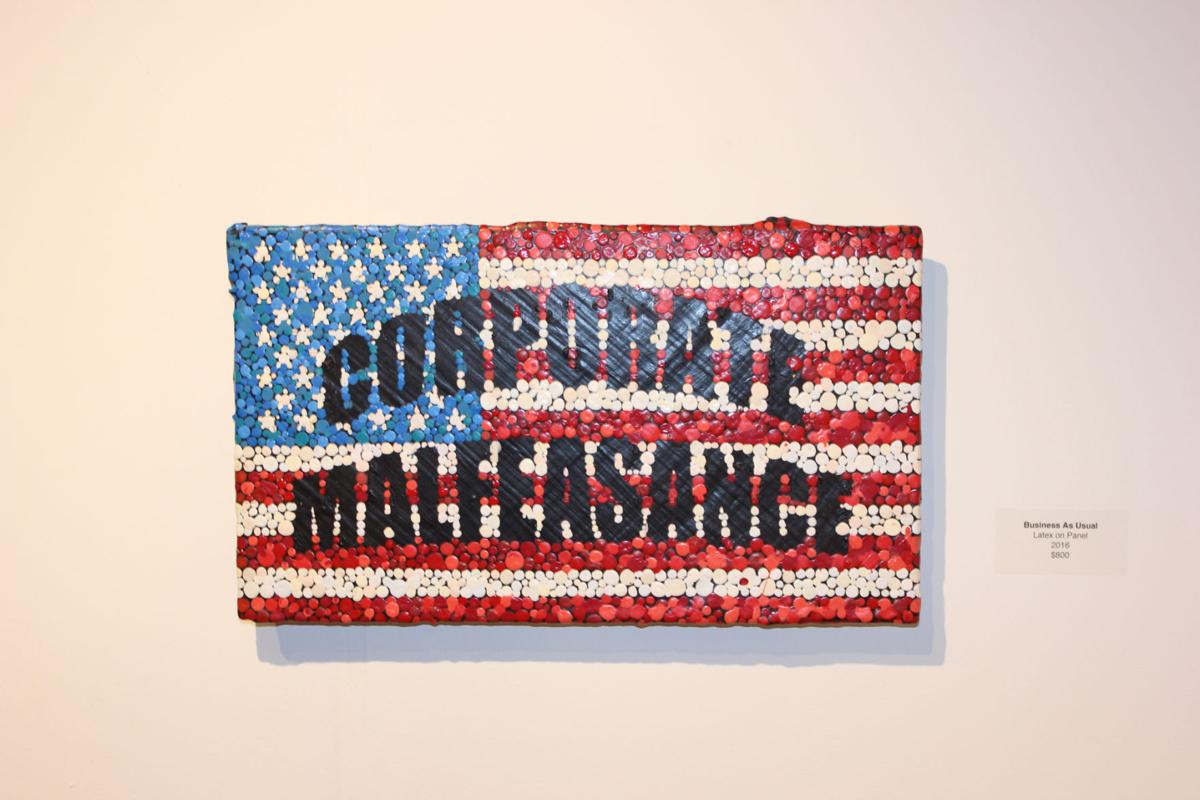 Omaha artist Bart Vargas, who has had his work shown around the country and around the world, is currently showing his pieces at UNDRground Contemporary Arts in downtown Grand Island.

It is his first Nebraska exhibit outside of Omaha and Lincoln.

“Bart is a highly recognized artist in the state of Nebraska,” Dubas said at the exhibit’s reception Friday night. Even though Vargas’ work has been shown around the world, he’s “a super nice guy.”

When Dubas thought about inviting Vargas to show at the UNDRground, he figured the worst he could say was no.

“He was just overly gracious and said he’d love to,” he said.

“For me, what excited me the most is he really fits the mission of our gallery.”

Vargas’ pieces are thought-provoking, and he is an established and contemporary artist.

“His work really reflects the time and place that we live in,” Dubas said.

His challenging pieces can inspire students who visit the gallery and “can be an educational component for the community to see work that is in this kind of genre,” he said. In publicity material sent out before the reception, Dubas pointed out that Vargas produces “really good art.”

Vargas, 46, says he has known Dubas for almost five years. They met when Vargas appeared at a conference in Aurora.

“I’ve always enjoyed Jerome and I believe in him and so when he asked me to come out here it was an easy yes,” he said. “I feel really honored to come to Grand Island.”

Vargas is pleased with the UNDRground.

Vargas is normally considered a mixed media artist. He has created a lot of sculptures and a lot of paintings.

“The last two years I’ve been making a lot of ceramics and screen prints,” he said.

The pieces in “Polarizations” are of a political nature.

“I don’t normally consider myself a political artist,” Vargas said. “I make a lot of different work. But Jerome requested that I show the ‘Trumplings’ here.“ And Vargas has created other political pieces over the years in addition to his other work.

The “Trumplings” are ceramic figures of President Trump as a baby. Other pieces in the exhibit deal with immigration and corporate America.

Vargas grew up in Bellevue as the product of two military families. Before attending the University of Nebraska at Omaha, he served six years in the Nebraska Air National Guard, both at home and abroad.

Even as a kid, “I would look at what we said about American ideals and American principals, and then I’d see what we do,” he said. “And even as a kid, I realized there were contradictions in those things.”

Later on, serving in the military, Vargas saw the same contradictions.

He continues to see inconsistencies. Thee are “things in our society that don’t reflect on the things we teach about the founding of our country. And a lot of these paintings and sculptures are a reaction to that,” he said, referring to his exhibit.

Parts of the show “are a response to the current president,” Vargas said

His siblings also served in the military.

“We just grew up being taught that everything we have in this country, the freedoms, the rights, somebody paid for that with their blood,” he said. “Freedom isn’t free. I just grew up in families that believed that you served your country — that you gave back. So when I got out of high school that’s what I did for six years.”

Vargas likes to use salvaged material in his art.

He currently has an exhibit running at the Kaneko gallery in Omaha called “Re Purpose.”

The exhibit consists entirely of sculptures and installations made out of old, dead computers, food packaging, used clothing and other items.

The paintings on display in Grand Island were done on wood panels made from salvaged theater sets.

“So a lot of this material came out of a Dumpster, before it was processed and put on the wall,” Vargas said.

Even the paint was unwanted, he said. It came from the collection site for Douglas and Sarpy counties.

“I take the things that society throws away or surpluses or doesn’t want, and I tried to make something new out of it that says something,” he said.

While going to college, Vargas worked as a janitor at night for four and a half years.

In that job, “I would see so much stuff get thrown away. That’s how I thought if I could figure out how to make stuff out of the thousands of pounds of trash that we were throwing away every day, maybe I wouldn’t have to spend so much on college, he said.

That’s when he started making art out of pop bottles, keyboards and cardboard boxes.

Hours: Fridays through Sundays from 1 to 5 p.m. The exhibit runs through Aug. 31.