Monday Mysteries is a weekly series featuring articles previously published in The Independent's Murder Mysteries publications. Articles will be published on Mondays through October 2020. 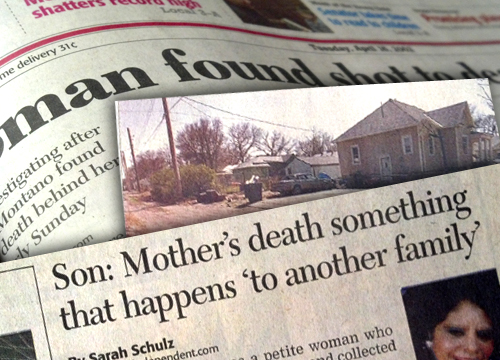 "Woman found shot to death in G.I." was the headline in the Tuesday, April 16 Independent after the news came out of the April 13 murder of Marsha Montano. Later in the week her son described to the paper his shock. Now 10 years have gone by and the murder remains unsolved.

EDITOR'S NOTE: This article was previously published in the July 2018 edition of Murder Mysteries. Monday Mysteries will publish each Monday through October 2020.

Rita Hernandez doesn’t talk about her late sister very long before her voice chokes up.

The family prays and hopes “that we find some closure,” she said on the phone from North Platte.

Marsha Montano was 51 when she was shot to death on an April night in 2002. Her son, Victor Moreno, found her body behind their house at 321 N. Darr just after midnight.

On the 10th anniversary of Montano’s death, the family buried her ashes in North Platte, which is their hometown.

“I feel that there’s still in Grand Island that person that is out there that doesn’t have a backbone nor do they have a conscience to come up and say ‘I did it,’” Hernandez said.

A mother of four, Montano lived in Grand Island for about eight years.

“She was an awesome person,” Hernandez said. “She would do anything for anybody, especially for her kids. If she had a dime and they needed a dollar, she would sell the shirt off of her back to get the dollar.”

Her sister, she said, worked a lot and “was always a giver. And best of all, she cooked like no other.”

Montano provided a lot of help to their mother, who was an amputee, Hernandez said. Their mother has since died.

Montano had diabetes, “but she never let that bother her. She just worked her little tail off. She was a worker,” said Hernandez, a former North Platte City Council member.

Montano had been living in the basement of the North Darr home with her husband, Francisco Montano, and his two teenage daughters. Victor Moreno, her son, lived upstairs.

Francisco Montano was arrested by Grand Island police but was released due to a lack of evidence.

Of Marsha’s four kids, two live in Nebraska, one in Colorado and another in Iowa. A brother, Tino Madagame, is the only family member still living in Grand Island.

About five years after Montano’s death, the family hired a private investigator, who was a former North Platte police officer. But Hernandez said Grand Island police wouldn’t share much information because the case was open.

“Whoever is out there and has information, even at this time, needs to share it with the police so we as a family could have closure,” Hernandez said.

Grand Island Police Capt. Kerry Mehlin said both the Montano case and the unsolved murder of Tina Ruschy are both “signed out to investigators on a cold case status.”

“There was regular contact between Rita and a former detective in the criminal division,” Mehlin said. He remembers a private investigator looking into the case, but he would have to look up the case to find out the details.

Hello Grand Island. We have just come to the one-year anniversary of the 9-11 tragedy and th…

Family dealing with not knowing who killed G.I. woman

Victor Moreno's parking habits have changed since his mother's murder.

Son: Mother's death something that happens 'to another family'

Marsha Montano was a petite woman who loved her family, enjoyed cooking and collected Coca-C…