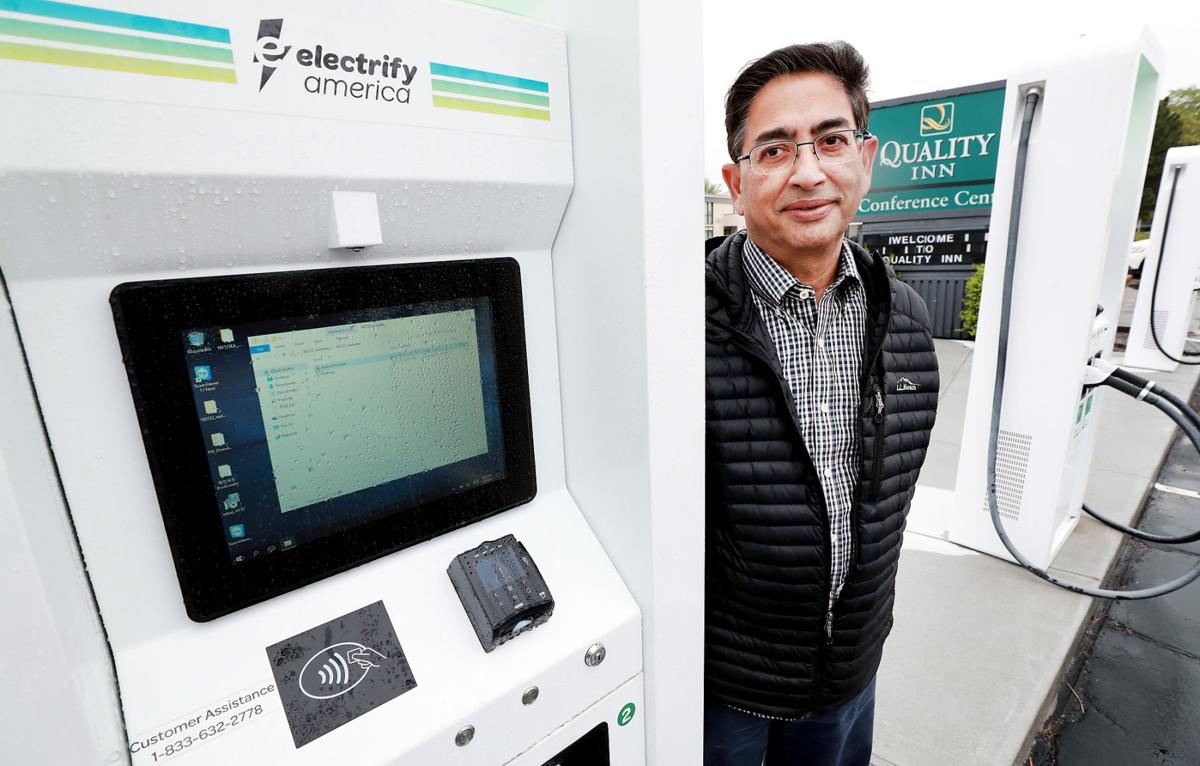 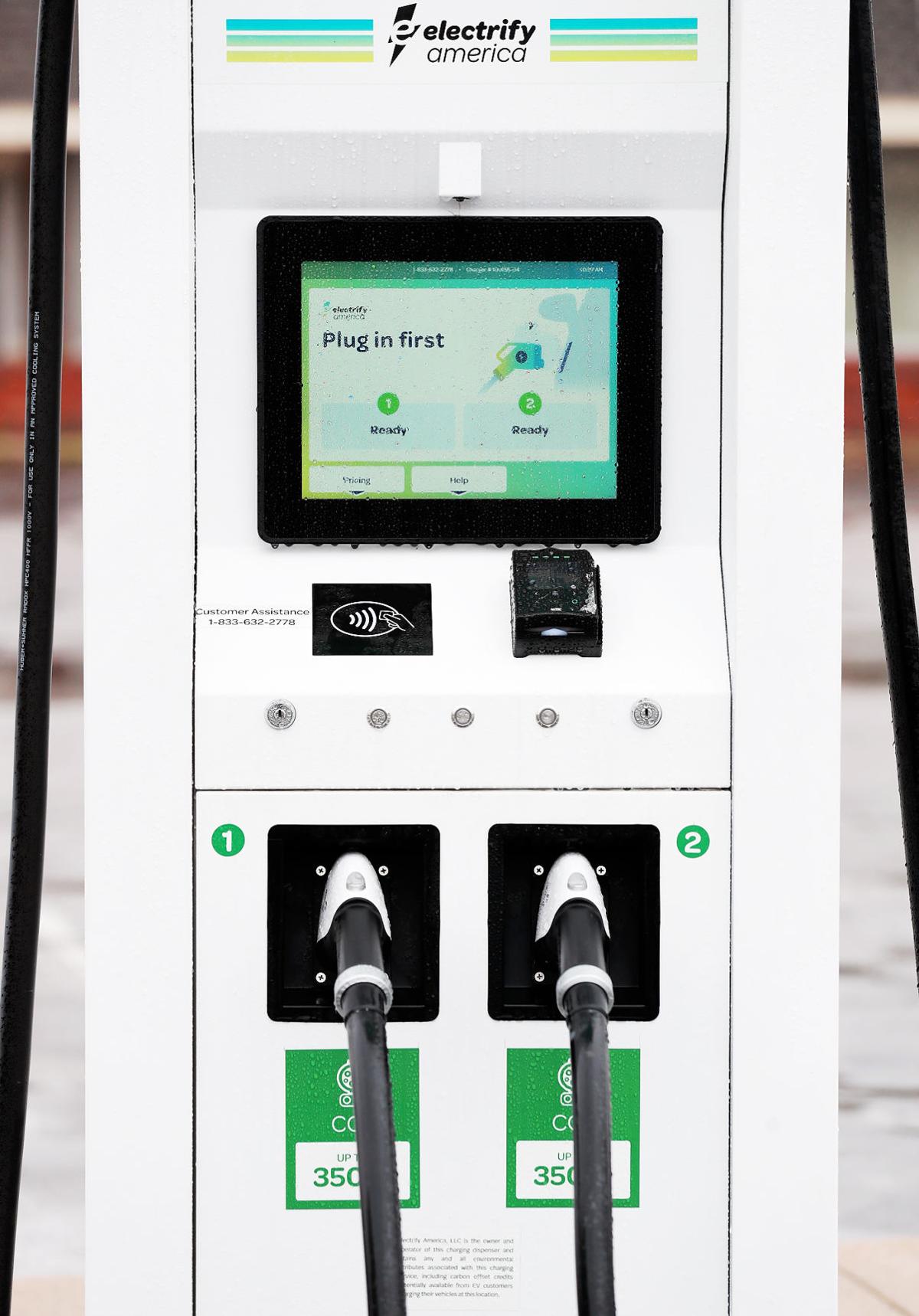 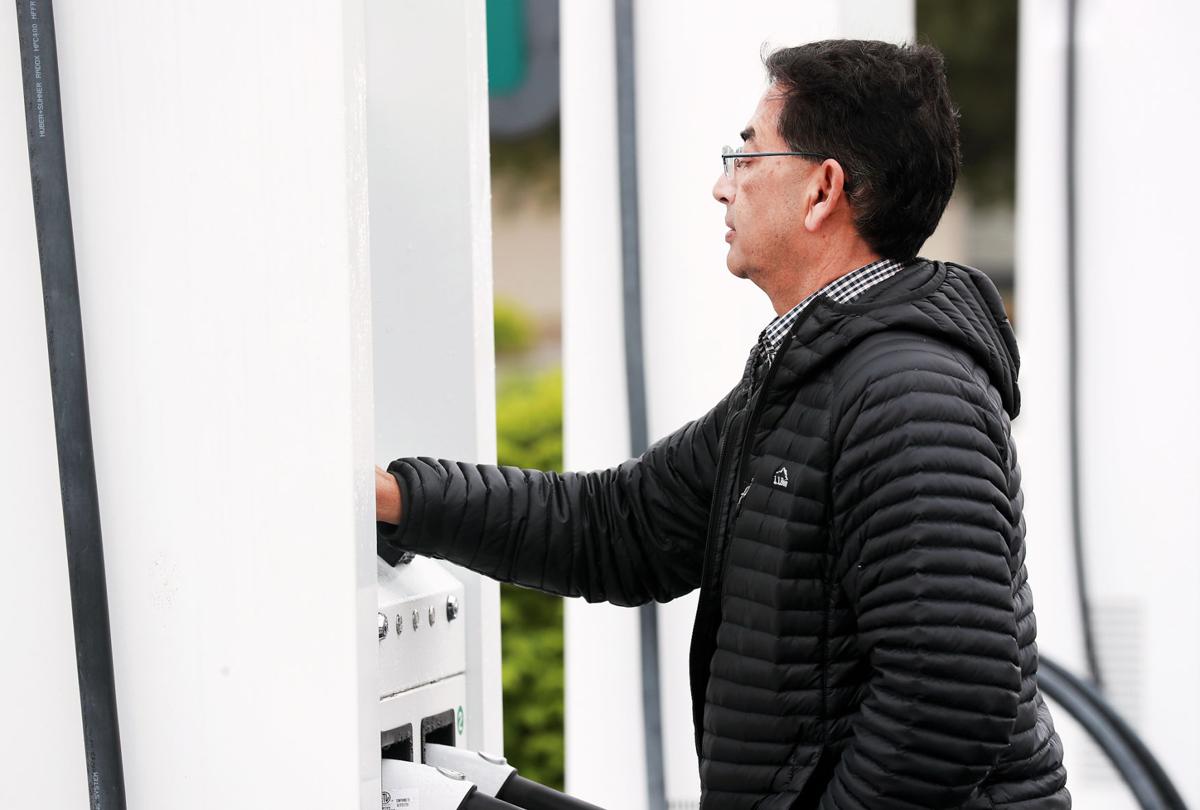 You can supercharge your car outside the Quality Inn and Conference Center. Assuming you have an electric car.

Eight charging stations for electric vehicles are in front of the motel, which is on Highway 281, just south of Interstate 80.

The charging stations, which resemble four gas pumps, are owned by Electrify America. That company is renting the space from Deepak and Suhita Sinha, who own the Quality Inn.

Almost every type of electric car on the road can plug into the charger, which is officially called a charging dispenser.

It will work with a Tesla, a Nissan Leaf, a Chevy Bolt, Volkswagen and several models of Mercedes that will show up this fall, said Deepak Sinha.

In some cases, car owners need an adapter.

The charging station was built in December. Anyone can use the charger — not just hotel guests.

Why did Sinha agreed to the station?

“I kind of feel like it’s an amenity for people who might want to stay here,” he said. “It’s also very useful for people who just go back and forth between Hastings and Grand Island.”

So far, he hasn’t seen any drivers get off of I-80 to use the charging station.

Sinha spends time in Colorado, where there are more electric cars than there are here.

In his advertising, he points out to prospective guests that the hotel has a charging station.

Sinha originally talked to Tesla, but no agreement was reached. Then he heard from Electrify America, which is building charging stations across the country.

If you’d like a charging station, being along Interstate 80 is a considerable advantage.

A Tesla Supercharger is located nearby at the Bosselman Travel Center.

Another electric vehicle charging station is in the parking lot of the Hastings Museum.

Electrify America is a subsidiary of Volkswagen Group of America. The company was established in 2017 following the Volkswagen emissions scandal.

Sinha says Electrify America doesn’t have to do a lot of research as far as building charging stations.

“They just find where Tesla put one, and then put one nearby,” he said.

But the company liked the Quality Inn location. Because the charging station is in front of the hotel, motorists don’t have to go looking for it.

By the end of this year, Electrify America plans to have more than 480 charging stations. The network will connect 42 states.

The chargers can charge at speeds up to 350 and 150 kilowatts. Those chargers are known as CCS, which stands for Combined Charging System.

There is also a CHAdeMO charger, which is used by such vehicles as the Nissan Leaf and Mitsubishi iMiEV.

Customers have to pay for the electricity.

The Sinhas have owned the Quality Inn for seven years. Beginning next month, it will become a dual-branded hotel. Part of the business will remain a Quality Inn. The other part will become a Suburban Extended Stay Hotel.