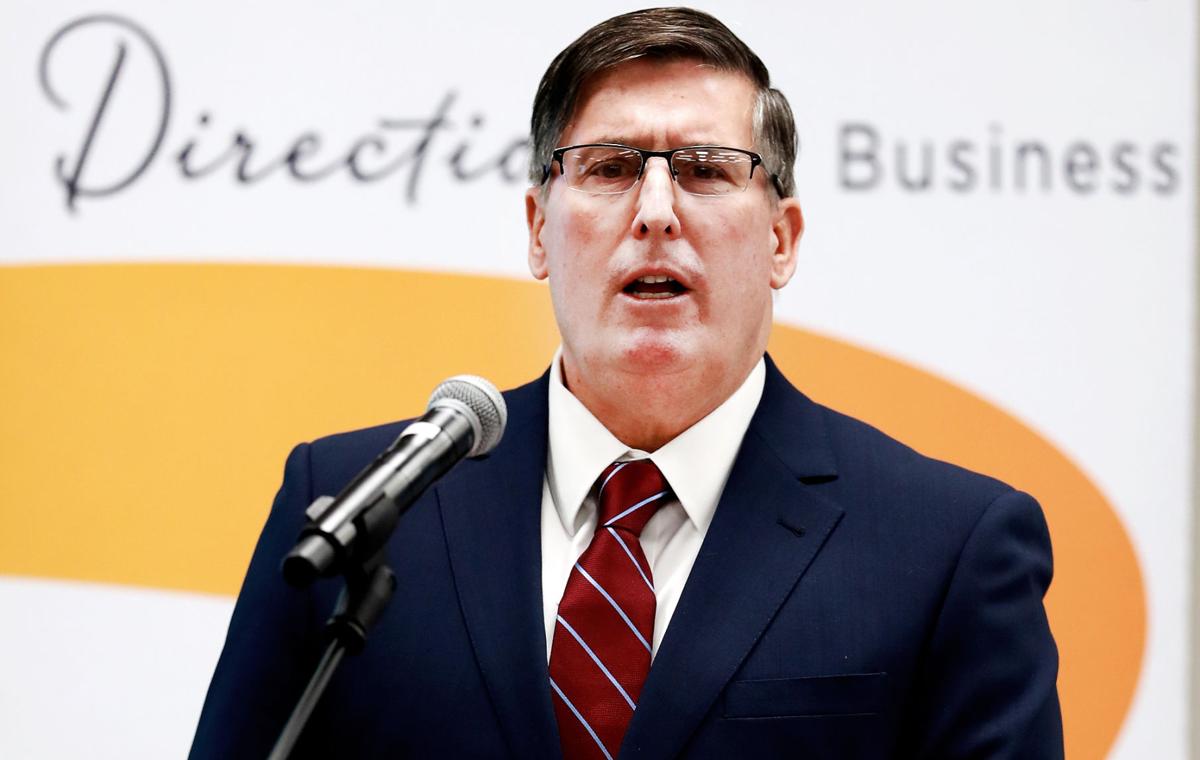 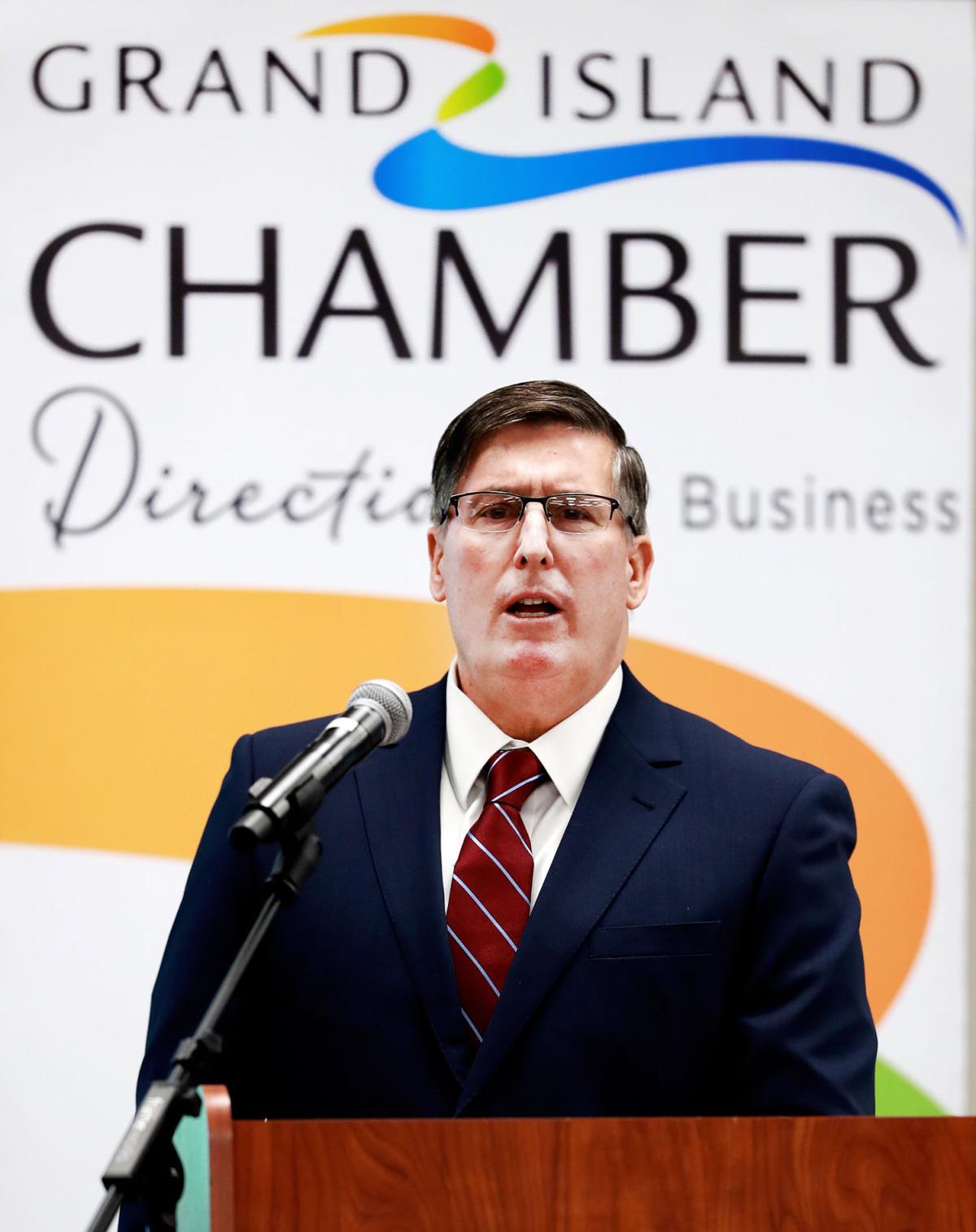 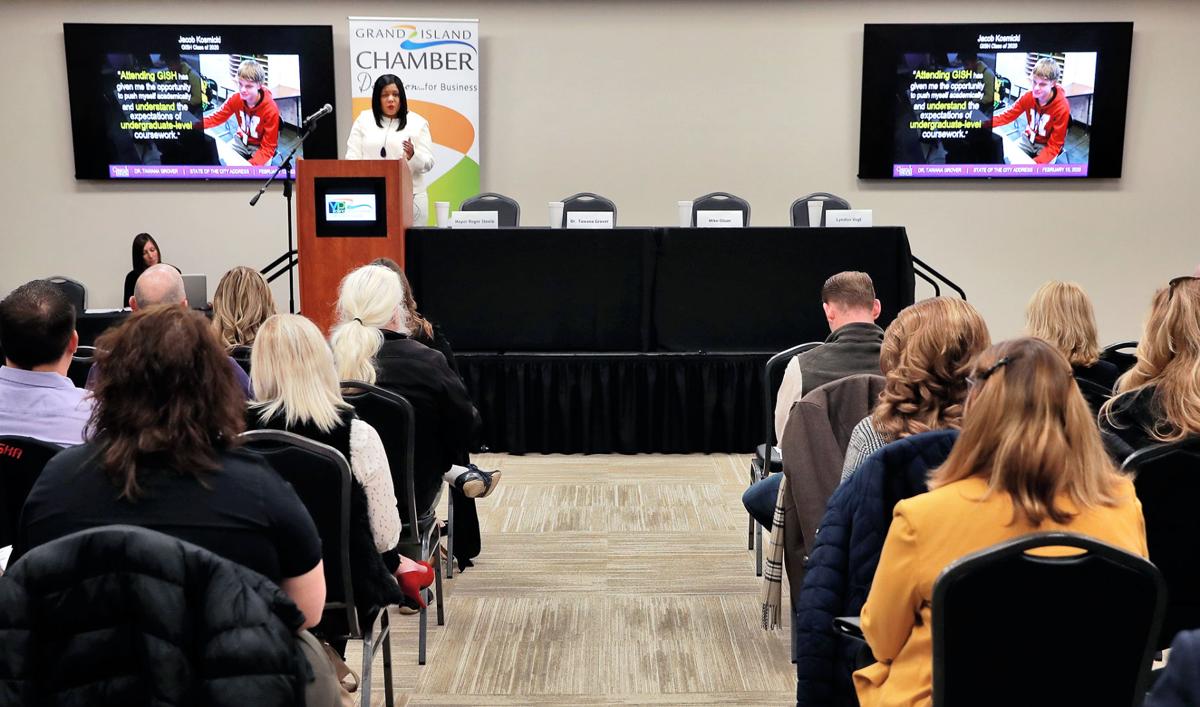 Education and workforce development dominated the State of the City address Thursday morning at Bosselman Corporate Headquarters in Grand Island.

This was the fourth annual State of the City address, which is hosted by the Grand Island Chamber of Commerce’s Young Professionals.

Each speaker addressed the audience of about 100 people for about 10 minutes. There was a question-and-answer session to end the event.

Workforce development was a major theme of Steele’s talk.

Steele said when he examined the Nebraska Thriving Index from the Rural Futures Institute, Grand Island ranked well in economic growth and quality of life. But one area needing improvement was knowledge occupations.

“When I read this I thought, we can change this story if our dreams and actions are greater,” Steele said. “Dreams still matter because they help us envision the future.”

“We talked to local businesses and learned we do have knowledge occupations, but we have a hard time attracting college-educated people, and people with skills, for the jobs,” he said. “As a result, the work is sent out of town.”

“We discussed our need to recruit people with skills and college degrees,” he said. “They proposed an internship program that will place paid interns in our businesses while completing their senior year of college.”

Steele said the plan has been met with “great enthusiasm by Grand Island business leaders.

“They want an opportunity to hire people directly from college to fill their employment needs,” he said.

Steele said the other thing hurting the ability to attract college interns and other employees is a lack of housing.

“My team and I knew the redevelopment of the Veterans Home Campus can house interns,” he said.

Working with White Lotus, an Omaha-based real estate developer, along with Chief Construction and Ray O’Connor, they have developed a plan to develop the Veterans Home Campus into housing for both interns and veterans.

Another area of the Nebraska Thriving Index where Grand Island and the region gets low marks is voter turnout.

From birth to the time a child graduates from high school, that time not only helps to shape the future of the individual, but also the community they live in.

With the new school buildings completed and now in use, Grover said Grand Island now has a “state-of-the-art learning environment” focused on giving a child the best education possible. That same environment makes sure students have the tools needed to meet their desired career goals.

She said two-thirds of Grand Island Public School graduates go on to further their education either by going to a state college, university, local community college or trade school.

To prepare them for that path, Grover said the school district and the community has come together. Opportunities include the district’s six career academies, which offer 20 different career pathways among them. Grover said they have increased the number of college-level courses available to students to 39, along with 14 AP classes. The district, along with its community partners, also gives students the opportunity for local internships at area businesses.

Grover said the districtis working on strategies in keeping Grand Island high school graduates from leaving the community by teaching the needed vocational skills for which local employers have a demand.

Grover also talked about the Gearup Program the district has implemented to increase the number of low-income students prepared to enter and succeed in postsecondary education.

Grover said the district has identified an early childhood development gap of as many as 700 children in the Grand Island community.

He said the airport is accommodating a growing number of charter flights to vacation designations, along with special programs, such as the Hero Flights that bring veterans to Washington, D.C.

To help accommodate the growth of CNRA, the airport board has completed $25 million in capital improvement programs in the last five years, such as CNRA’s new terminal and administration building. Of that $25 million, Olson said $20 million has come from the Federal Aviation Administration.

He said the airport is continuing to expand its facilities, as another $13 million in capital improvements are underway, including a new fire station.

Olson concluded his talk with an announcement that CNRA will host the Commemorative Air Force Air Power History Tour, which is a national air tour of historic World War II aircraft.

Those aircraft will include a B-29 Superfortress, a B-24 Liberators Diamond Lil T-6 Texan and PT 13 Steermans.

Vogt talked about the duties of the Central Platte Natural Resources District, which covers an 11-county area in Central Nebraska, including Grand Island. Of the many responsibilities charged to the Central Platte NRD, two of the more important ones are flood control and drainage issues.

Nearly a year ago, Central Nebraska suffered major flooding in March, and then again in July. Grand Island was spared much of the devastating damage that many communities experienced because of two flood-control projects implemented by the Central Platte NRD, City of Grand Island and its partners.

One of the those projects was the Wood River Flood Risk Reduction Project, which protects much of the southern part of Grand Island.

The project’s roots go back to the devastating flood Grand Island experienced in the late 1960s that caused millions of dollars in property and infrastructure damage.

Vogt said work on the $23 million project began in 1989 and was completed in 2004. One year later, the project proved its worth when the Wood River flooded, but much of Grand Island was spared flood damage.

Vogt said the project got underway in 2000 and will be completed sometime this year. While the project was not finished when last year’s record flooding was occurring, he said enough of it was done to spare Grand Island millions in damages.

For example, the project protects 23,000 acres south of Highway 2 and Highway 281. In that area, 3,000 homes and businesses were spared — an estimated $47 million savings in property and infrastructure damage.

Like the Wood River flood-control project, Vogt said the Prairie/Silver/Moores Creek Flood Risk Reduction Project “more than paid for itself during the 2019 flood events.”