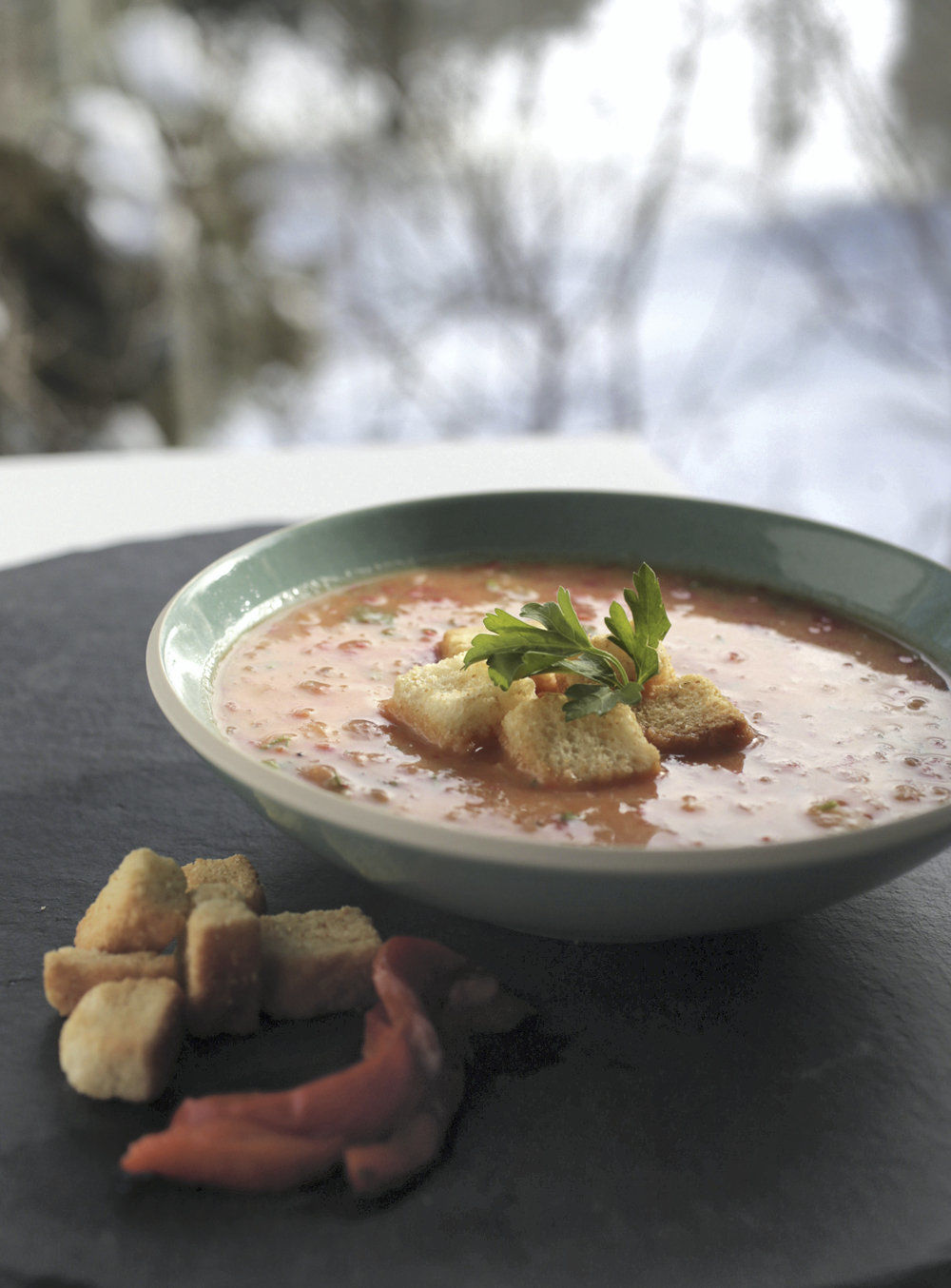 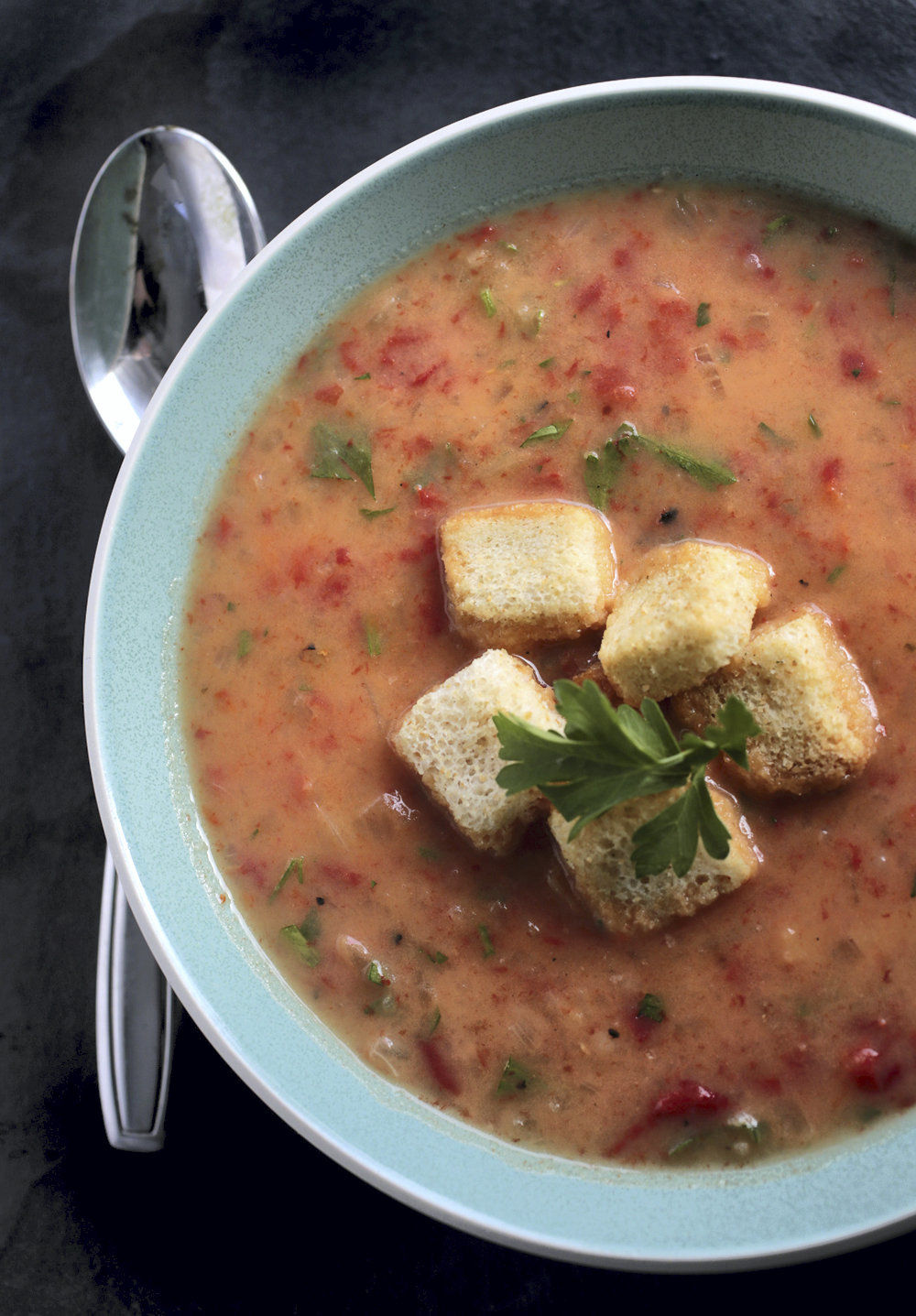 Sometimes a bowl of soup, with some crusty bread, can suffice as dinner. Just about any variety of soup can be comforting, warm and filled with hearty ingredients.

Today’s chowder recipe falls into the general soup category and does all of that and then some. What’s best about this chowder is its sweet and smoky taste, all from the roasted red peppers. It also gets a bit of heat from cayenne pepper, which is optional and gets cooled off with the milk or cream. Besides taste, another bonus is that it’s a beautiful chowder with deep flavors that will impress guests.

How does chowder differ from a soup? A chowder is classified as any kind of thick soup that has chunks of food in it. Those chunks can be vegetables, seafood or meat. Most chowders are cream- or milk-based, which also gives them body and a slight thickness.

Raw cubed potato is used in many chowders as an ingredient, but also because its starch provides thickening. For best results, use russet potatoes because they won’t have that crumbly texture like a baking potato does once it’s cooked. It’s that chunky texture of a chowder that sets it apart from, say, a smooth bisque.

Roasted red peppers are at the heart of this chowder. Once the peppers are roasted, their sweetness is more pronounced. They also take on charred, smoky flavor which adds a boost to any dish.

In this recipe, the pepper pieces get that charred effect in the pot. But if you are in a pinch, substitute a 12-ounce jar of roasted red peppers found in the condiment aisle. If you do use jarred roasted peppers, drain them well and pat with paper towels. With jarred peppers, skip the charring step in this recipe and add them to the pot once the onions are tender and browned.

One easy way to jazz this chowder up is to top it with seafood. Cooked lobster meat is terrific, fancy and something to swoon over. No lobster? Try cooked shrimp — whole or cut into pieces.

Note: You can substitute a 12-ounce jar of roasted red peppers; drain before using. Add the peppers once the onions are browned.

Add the onions and cook for 5 to 6 minutes more or until soft and golden brown, stirring occasionally. Stir in the potatoes and broth. Bring to a boil, reduce heat, and simmer, covered, for 12 minutes or until potatoes are very tender.

Coarsely mash up the potatoes a bit with a potato masher. Stir in the milk or half-and-half and a few pinches of cayenne pepper. Heat through.

Remove from heat; stir in butter and season to taste with salt and pepper. Divide among shallow soup bowls and top with croutons and, if using, cheese and a sprinkling of fresh parsley.

Test Kitchen is Tribune News Service column by Susan Selasky, the food writer and Test Kitchen director for the Detroit Free Press, where she develops and tests recipes and answers readers’ questions about all things food. Contact her at sselasky@freepress.com. Follow her on Twitter @SusanMariecooks